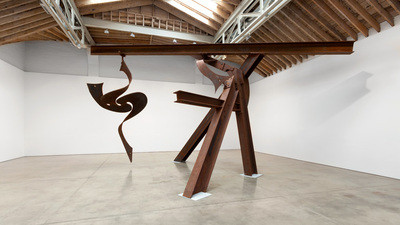 NEW YORK—The Paula Cooper Gallery is pleased to present Little Dancer, a new large-scale steel sculpture by Mark di Suvero. The work is an assemblage of intersecting l-beams and carved kinetic spirals. It will be exhibited for the first time beginning May 4 at 534 West 21st Street.

Mark di Suvero was given his first retrospective exhibition in 1975 at the Whitney Museum of American Art. In addition to countless museum shows, di Suvero has had acclaimed citywide exhibitions in Nice (1991), Venice (1995, on the occasion of the 46th Venice Biennale) and Paris (1997). In 2011, eleven monumental works were installed on Governor’s Island in New York Harbor, the largest outdoor exhibition of work in New York since the 1970s. That same year di Suvero received the National Medal of Arts, the nation’s highest honor given to artists.

On May 22, 2013 the San Francisco Museum of Modern Art will open a major outdoor exhibition of Mark di Suvero's works at historic Crissy Field, a former airfield and military base near the Golden Gate Bridge. The works will remain on view through May 16, 2014. A number of di Suvero sculptures are permanently installed at the Storm King Art Center, Mountainville, New York, a sculpture park that has also organized important exhibitions of the artist’s work in 1985, 1995-96, 2005-6 and 2008. Di Suvero lives and works in New York.
www.paulacoopergallery.com