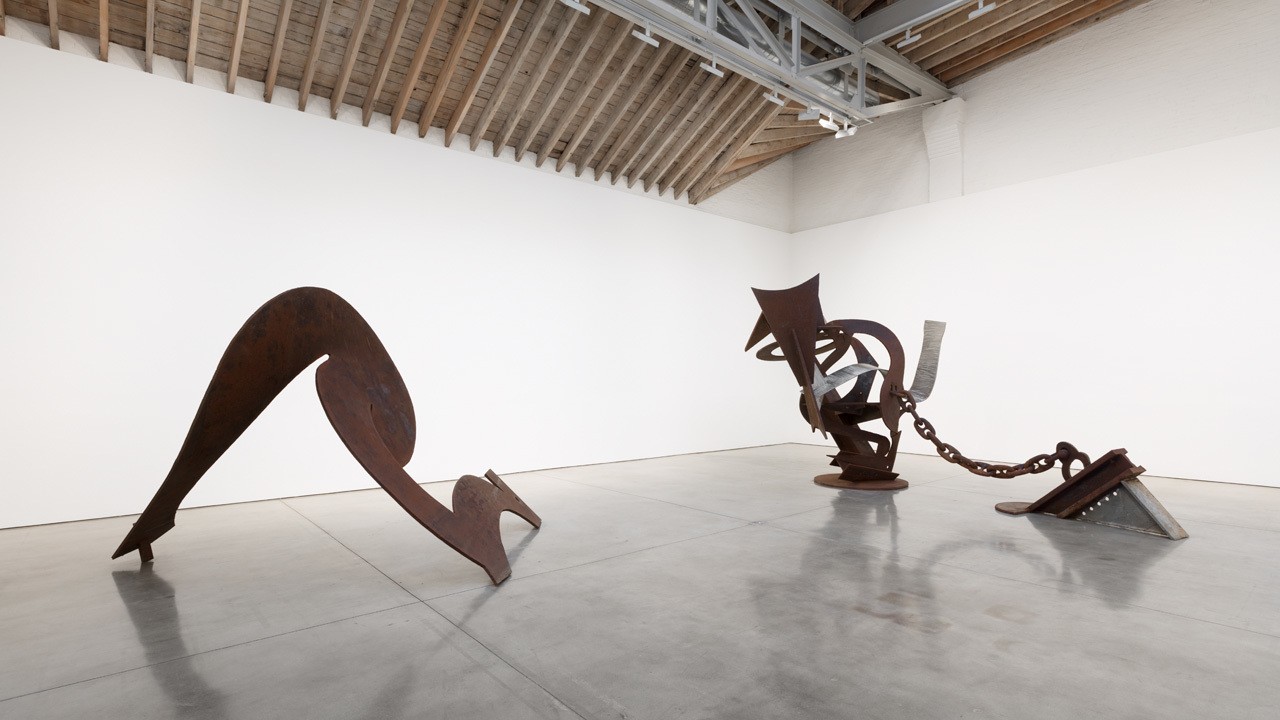 NEW YORK – Paula Cooper Gallery is pleased to present an exhibition of work by Mark di Suvero. Throughout his sixty-year career, di Suvero has created vibrant and dynamic works, which fuse vitality and movement with complex construction. Presenting a range of medium including sculpture, painting, and drawing, this new exhibition explores the artist’s expanded use of gestural curvature and nonlinearity. The show will be on view at 534 West 21st Street from January 6th through February 3rd, 2018. The opening reception will be on Saturday, January 6th from 6 to 8pm.

For his monumental work, Eppur si muove (2014-2017), di Suvero cuts a massive flat plate of stainless steel into an undulating Möbius band that he coils and twists to envelop a horizontal cylinder. Elevated by white support beams on either end, the torqued steel appears like an enormous spiral streamer, buoyant and effervescent in its refractive lustered surface. “And yet it moves,” as the title, a quote by Galileo, denotes: the kinetic sculpture calls on the viewer to participate actively—to walk under and around, to observe its oscillating, pendulous mass. “Participation inside a piece, where you don’t just stay as a static external observer but actually enter and change the piece itself; I think that is central to the work that I’m trying to do,” di Suvero stated in North Star, the 1978 documentary film about his work. “It allows the possibility of people to enjoy.” A second sculpture, Acla Cuna (1994), revolves on a vertical axis, its osseous curvature cutting through space.

Di Suvero’s paintings, Ergo (2016) and Untitled (2017), push color contrasts to rich and energetic extremes. Varied painterly marks are applied rhythmically across their surfaces; gestural patterns bleed and intersect. Rendered in part using phosphorescent paint, di Suvero inserts literal luminescence such that, when viewed under black light, the works reveal alternate subconscious meanings. Also on view are a number of sliding paper works, for which di Suvero splices one drawing of ink, marker and pen through another. Inviting the viewer to shift their center panels, the works’ compositions are transformed as their abstract lines caper within the frames. Similarly contingent and mutable are a group of small-scale sculpture composed of loosely interlocking parts. Challenging the viewer’s creative ingenuity, these works can be repositioned to form countless configurations of varying volume and stability.

Born 1933, Mark di Suvero first came to public prominence in 1975 with a display of his work in the Jardin des Tuileries in Paris—the first for any living artist—and a major retrospective that same year at the Whitney Museum of American Art in New York, which featured his large-scale sculpture in public sites through all five boroughs of the city. The artist has had acclaimed international exhibitions in Nice (1991), Venice (1995, on the occasion of the 46th Venice Biennale) and Paris (1997), among others. In 2011, eleven monumental works were installed on Governors Island in New York Harbor. Organized by Storm King Art Center, this marked the largest outdoor exhibition of work in New York City since the 1970s. That same year di Suvero received the National Medal of Arts, the nation’s highest honor given to artists. In May 2013, the San Francisco Museum of Modern Art presented eight monumental sculptures in the city’s historic Crissy Field for a yearlong outdoor exhibition. In September 2016, two monumental works were installed on Chicago’s Lakeshore Drive through a partnership between the Chicago Park District and EXPO CHICAGO; they will remain on view through September 2018. One can also see a number of di Suvero sculptures at the Storm King Art Center in Mountainville, New York, permanently installed. The artist currently lives and works in New York.
www.paulacoopergallery.com