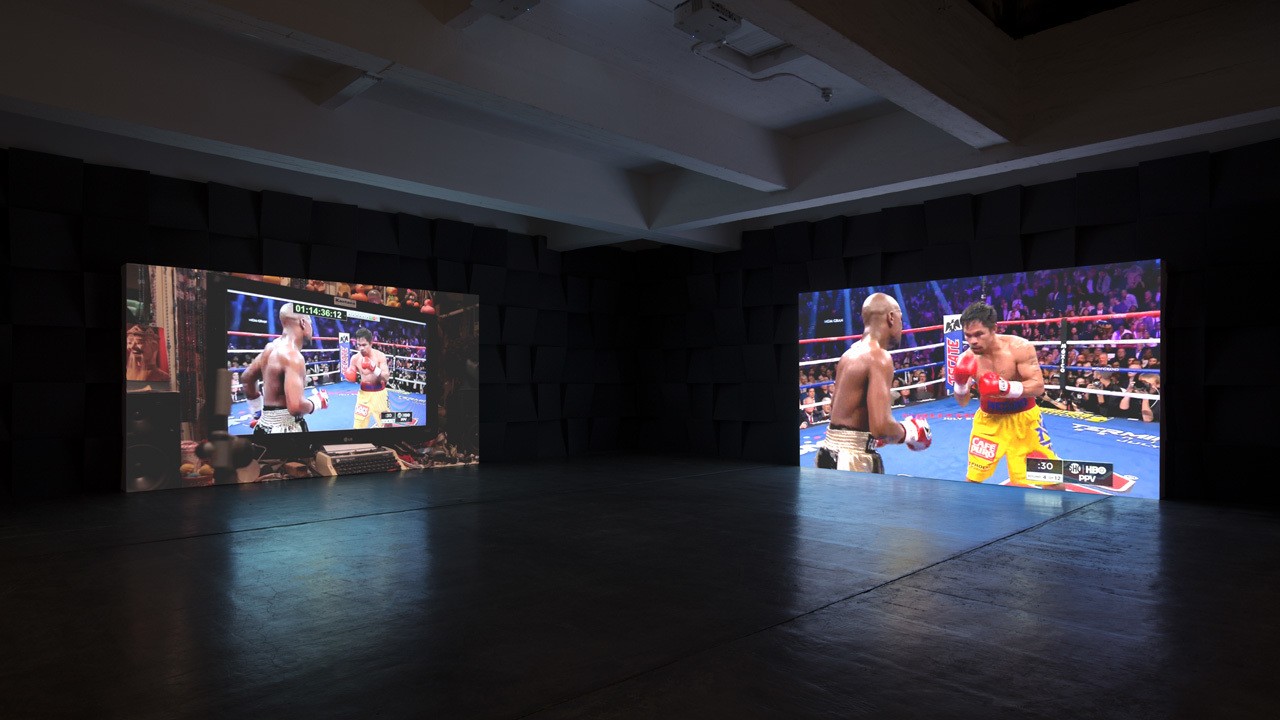 Known for his innovative manipulation of digital media, Paul Pfeiffer recasts the visual language of spectacle to uncover its psychological, cultural and racial underpinnings. For this exhibition, the gallery presents Pfeiffer’s forty-eight minute multi-channel audio and video installation, Three Figures In A Room (2015-2016), which features televised footage of Floyd Mayweather and Manny Pacquiao’s highly publicized boxing match at the MGM Grand, Las Vegas, in May 2015. The original audio has been replaced by an eerily quiet Foley soundtrack, which isolates the physical exertion of the boxers and movement among the stadium audience—a rhythmic thud of footsteps; an acute smack of leather on flesh; a hissing snarl of exhausted breath. A second video channel shows the sound technicians as they distill and recreate the sound effects. Mirroring the boxers’ athleticism and focus, the Foley channel plays in sync with the fight channel, each placed against opposing walls in the main space of the gallery. Audio playback alternates from one channel to the other, sparring across the room and enveloping the viewer in the meticulous process of sound production.

Also on view are three new works from Pfeiffer’s ongoing Caryatid series, begun in 2004. Screened on lustrous chrome television sets of varying sizes, the HD videos show slow-motion excerpts of boxing matches in which the attacking opponents have been digitally removed. Cast into a torpid yet tense solo performance, the remaining boxer invites close scrutiny. Obscure corporeal details are brought to the fore, highlighting the brutality of impact from an invisible assault, while the work’s presentation as sculptural object serves to prompt further meditative viewing.

Paul Pfeiffer was born in Honolulu, Hawaii. He has had one-person exhibitions at the Whitney Museum of American Art (2001), MIT’s List Visual Arts Center and the Museum of Contemporary Art Chicago (2003), the National Gallery of Victoria, Melbourne (2005), MUSAC León, Spain (2008), the Hamburger Bahnhof, Berlin (2009) and the Albright-Knox Art Gallery, Buffalo (2010). He has received numerous awards and fellowships, including a Fulbright-Hayes Fellowship and the Bucksbaum Award from the Whitney Museum. Pfeiffer was the subject of a retrospective at Sammlung Goetz in Munich, Germany in 2011. The artist lives and works in New York City.
www.paulacoopergallery.com