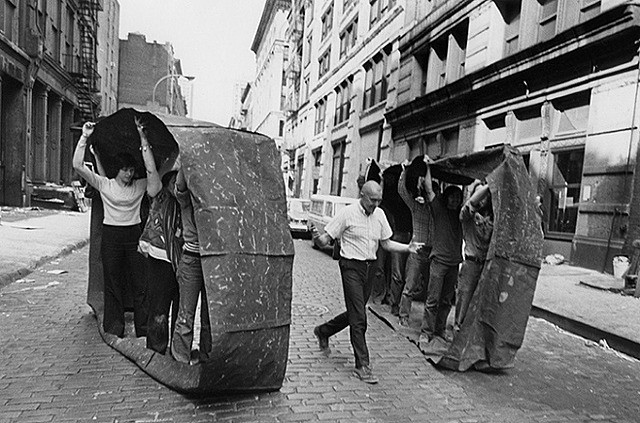 NEW YORK – The Paula Cooper Gallery is pleased to present Pictures of George, an exhibition of photographs of George Maciunas by Peter Moore. The exhibition will be on view from March 26 through April 23, 2011 at 465 West 23rd Street.
The exhibition includes more than 40 pictures of Fluxus founding member George Maciunas, the majority taken during the heyday of the movement,1964 to the death of Maciunas in 1978. Lithuanian-born, Maciunas emigrated to the United States with his family in 1948 at the age of 17. He studied architecture, graphic design and art history. Best known as the founder and main coordinator of the art collective Fluxus, Maciunas worked tirelessly towards a radical redefinition of art as a communal experience, socially relevant and accessible to all. In 1968 Maciunas organized “Fluxhouse II”, located at 80 Wooster Street, SoHo’s first successful live/work artist cooperative and a center for Fluxus activities. Moved by a neo-Dadaist impulse to promote a “revolutionary flood and tide of art,” Maciunas orchestrated festivals and happenings, film screenings and other “actions” bringing together an international artistic avant-garde in the service of a collective anti-bourgeois ideal.

Peter Moore, the celebrated documenter of New York’s artistic scene, was intimately involved with the Fluxus circle and a close friend of Maciunas. Moore’s photographs capture not only Maciunas’s humor and his prankster nature, or his intense focus and ceaseless energy, but also the final year of his life as he was undergoing treatment for cancer. Pictures taken for Maciunas’s final Flux-edition, a deck of cards with standing portraits of himself in variously outrageous guises, illustrate the “waggish genius of the Grand-Flux Joker himself”[1].

As a part of New York’s blossoming art community in the early 1960s, Peter Moore (1932-1993) began what was to become an unmatched photographic archive of Fluxus, Judson Dance Theater, countless happenings and performances. His images have been widely published in texts about the period, including Sally Banes’ Democracy’s Body: Judson Dance Theater, 1962-1964 (1983), and the catalogues In the Spirit of Fluxus (1993), Yvonne Rainer: Radical Juxtapositions 1961-2002 (2002), and Critical Mass: Happenings, Fluxus, Performace, Intermedia and Rutgers University 1958-1972 (2003). Moore has had one-person exhibitions throughout the world (in Geneva, Tokyo, Cologne and New York) and his work has been included in numerous museum exhibitions, such as the 1970 show “Happenings and Fluxus” at the Kölnischer Kunstverein in Cologne, Germany; the Fluxus pavilion at the 1990 Venice Biennale; “In the Spirit of Fluxus” at the Walker Art Center in 1993; and “Art, Lies and Videotape” at Tate Liverpool (2003). From 1978 to 1989 he was the Senior Technical Editor of Modern Photography magazine. In 2000, D.A.P. published The Destruction of Penn Station: Photographs by Peter Moore, edited by Barbara Moore, which presented Peter Moore’s previously unseen documentation of the demolition of one of New York’s finest buildings, Pennsylvania Station.
www.paulacoopergallery.com