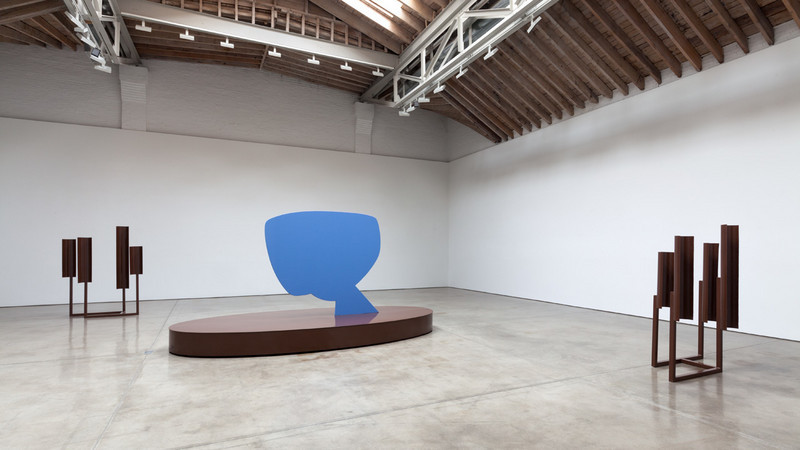 NEW YORK—The Paula Cooper Gallery is pleased to present a selection of works by Robert Grosvenor from April 25th through June 26th at 534 West 21st Street. The exhibition will include two large-scale sculptures from different periods as well as a selection of recent photography, all shedding light on Grosvenor’s artistic evolution over the past forty years. An opening reception will be held on April 25th from 6 – 8 pm.

Known primarily as a sculptor, Grosvenor produced a number of broken or fissured horizontal wood beams in the early to mid 1970s. Conceived while experimenting with the infinite lines and abrupt tears of masking tape, the logs were fractured using precise and repeated force from heavy machinery. On view in the front gallery, Untitled, 1975, rests soberly on the ground. Patinaed with creosote and grease, its darkened wood accentuates splintered surfaces and riven ends. The object’s resolute stillness and judicious placement shifts the optical energy of the gallery, creating an ambiguous sense of space. In the words of critic and curator, Bruce Kurtz, they “do not give the impression of great weight, nor do they seem to hover in air, but they have a subtle sense of relating to the horizon as though they were in water” (Arts Magazine, October 1975). Though the artist resists specific metaphorical readings of his works, their strange seduction lies in these allusive –and elusive– comparisons.

During the 1980s, Grosvenor’s sculptures became increasingly heterogeneous. By the artist’s account, his protracted, tactile process lends to unique works rather than serialized projects. Constructed in 2005-2006, the large-scale work on view, Quadrum, is enunciated in four discrete parts across the main gallery. In the center, a cobalt aluminum piece stands on an oval metal plinth. Its vibrant hue and flat, irregular contours contrast with two vertical steel components spaced diagonally on opposite sides. Thoroughly enigmatic while asserting a confident and matter-of-fact presence, the work achieves a dynamic pragmatism that is playfully inscrutable. As the viewer moves, its various planes shift in and out of view, blurring volume and line, inertia and activity. The individual components suggest references to organic or industrial objects. Yet, ultimately they function as mere reflexive presentations of irreducible parts.

For his recent series of photographic works, Grosvenor translates this formal vocabulary into two-dimensional snapshots of everyday life. The intimate images present a breadth of familiar objects in striking —and often comical— arrangements. In one, an orange traffic cone pokes out of murky gray water to face off against its wooden lookalike. In another, a toy motorboat cruises down a waterway, alongside vehicles on a paved road. Viewed in succession, the images reveal a tableau of shapes that are suggested in his sculpture: a curved roof, a horizontal lintel, a floating log. As in his sculptures, Grosvenor applies his particular and peculiar brand of abstraction. Toting flattened colors, silhouetted subjects and cropped perspectives, they offer an alternate reality that is parallel to ours, yet oddly alien and abstruse.

Born in New York City in 1937, Robert Grosvenor studied at the Ecole des Beaux-Arts and the Ecole Supérieure des Arts Décoratifs in France and the Universitá di Perugia in Italy. He began exhibiting in the 1960s and was a member of the artist collective Park Place. His work has been prominently included in important exhibitions such as “Primary Structures” (Jewish Museum, 1966) and “Minimal Art” (Gemeentemuseum Den Haag, 1968), which helped define minimalism. He soon diverged from this movement to create challenging works that resist assimilation to any of the prevailing art movements. Important one-person exhibitions of Grosvenor’s work have been presented at the Kunsthalle Bern (1992) and the Fundação de Serralves, Porto (2005). Most recently, he participated in the 2010 Whitney Biennial. Grosvenor’s work is included in the collections of the Walker Art Center, Minneapolis, Storm King Art Center, New York, the Museum of Modern Art, New York, the Hirshhorn Museum and Sculpture Garden, Washington, D.C., the Whitney Museum of American Art, New York, and the Serralves Museum, Porto.
www.paulacoopergallery.com