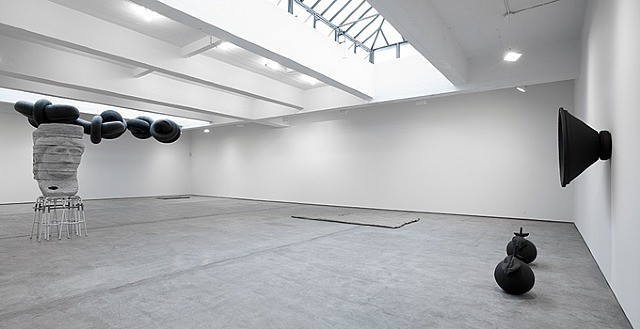 NEW YORK – The Paula Cooper Gallery is pleased to present a selection of recent works by Liz Glynn, Justin Matherly, Amy O’Neill, Nadine Robinson and Michael Sailstorfer. The exhibition presents varied approaches to contemporary sculpture.
Liz Glynn’s practice explores and questions historical and cultural cycles of growth and decline. In Surrogate Objects for the Metropolitan, Glynn creates a set of ad hoc facsimiles for the Metropolitan Museum to replace the “Morgantina Silver,” a prized collection of antique silver artifacts excavated in Sicily and which the museum consented to return to Italy in 2006. Glynn’s works, made with distinctively simple materials and methods “are not replicas, as they do not fake authenticity. In her practice she emphasizes the contemporary, this notion of an ever-shifting present, using the past not as an action long over, but as agent in the present.”

Justin Matherly creates sculptures made of concrete and reconfigured ambulatory equipment (walkers, crutches, shower chairs) that often recall misshapen bodies or derelict monuments. Matherly's new work takes inspiration from Juno Ludovisi, a colossal first-century marble head of the Roman goddess. The artist’s interests were influenced in part by Jacques Rancière’s re-reading of Friedrich Schiller’s “Letters on the Aesthetic Education of Man,” which discuss this statue as “not a work of art” but rather an autonomous object which functioned with equal power in the realms of life, politics and art. For Matherly, the statue becomes a locus of re-actualization, a reawakening of potentialities into the present.

Through installations, drawings and films, Amy O’Neill draws upon American vernacular culture and folklore, foregrounding strangeness and blurring the distinction between authenticity and kitsch. Inspired by the Victory Gardens, which were planted at private residences and public parks across the United States and Europe during the two World Wars, O’Neill’s new series of floor sculptures builds upon the artist’s interest in “defunct modes of domestication and plays with the relationship between the functional and the symbolic.”

Born in London to African parents, Nadine Robinson spent her childhood in Kingston, Jamaica, and later emigrated to New York. Her work is a reflection of her cultural hybridity, and the result of her critical engagement with issues of race and spirituality in contemporary life. Black Trinity refers to the artistic tradition of the altarpiece and to minimalist and pop sculpture. With its central subwoofer flanked by two fruits, Black Trinity metaphorically represents Christ the Judge. The sculpture’s title alludes to a painted image of three elderly dreadlocked men on the front of St. Mary of Zion Church in Axum, Ethiopia, known as the Holy Trinity. Built around 300 AD the church is the most sacred shrine in Ethiopia and the traditional site where Ethiopian emperors were crowned. In the 1950s, Emperor Haile Selassie I, the messianic leader of Jamaica’s Rastafari movement, whose name literally means the “power of the Trinity”, built a modern cathedral next to the old church.

Michael Sailstorfer creates exhilarating images of ruin and metamorphosis by transforming everyday objects and places. An aggressive approach to materials and a sense of absurdity inform his practice, in which signifiers of ordinary urban or rural life are variously exploded and reconfigured. Often rooted in a fascination for real, historical and existential space, Sailstorfer's works operate within the tension between homeland and remoteness, mobility and stillness, sound and silence, or light and darkness. Destruction, recombination, and transformation are his basic compositional principles.
www.paulacoopergallery.com