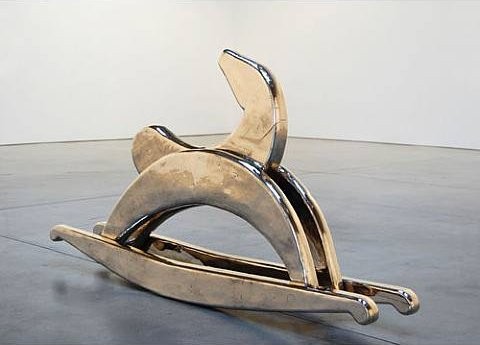 NEW YORK -- The Paula Cooper Gallery will present an exhibition of new work by Sherrie Levine, from April 5 through May 3, 2008.
The exhibition will include two new bronze sculptures cast from found objects: one, False God, a cast of the skeleton of conjoined twin calves, the other, Dada, a cast of a rocking horse. Also on view will be postcard collages from 2000.
Since the late 1970s, Levine has produced work that challenges ideas of originality and authorship, employing strategies of repetition, duplication, seriality and literalization that enable her to recontextualize and transform objects and images from our cultural landscape. She has said: “I consider myself a still-life artist, with the bookplate as my subject. I want to make pictures that maintain their reference to the bookplates. And I want my pictures to have a material presence that is as interesting as, but quite different from, the originals.”
With her reprises of found artifacts whose relationship to nature is mediated by science (the abnormal skeleton), arts and crafts (the hobbyhorse), or mass-produced ideas of the picturesque (the postcards), Levine develops an engagement with the still-life genre that owes as much to modernist sculpture and collage as to ethnography and archeology. In his essay on Flaubert’s The Temptation of Saint Anthony, Michel Foucault wrote about the modern imaginary as “a phenomenon of the library.”
The imaginary now resides between the book and the lamp. The fantastic is no longer a property of the heart, nor is it found among the incongruities of nature; it evolves from the accuracy of knowledge [...]; and a true image is now a product of learning: it derives from words spoken in the past, exact recensions, the amassing of minute facts, monuments reduced to infinitesimal fragments, and the reproductions of reproductions.
Similarly, Levine’s work puts forward a notion of the image as a product of knowledge, a palimpsest of the various ways in which nature has been memorialized in the vast archive of earlier art and cultural discourse.
Sherrie Levine was born in Hazelton, Pennsylvania, grew up in St. Louis and moved to New York in 1975. She has had one-person exhibitions at the Hirshhorn Museum, Washington D.C., 1988; the High Museum of Art, Atlanta, 1988; the San Francisco Museum of Modern Art, San Francisco, 1991; the Philadelphia Museum of Art, Philadelphia, 1992; and Portikus, Frankfurt, 1994, among many others. In 2005, she was one of the four artists included in Quartet, the opening exhibition of the new Walker Art Center in Minneapolis. Levine has recently had shows at The Arts Club of Chicago (in September 2006) and the Georgia O’ Keefe Museum in Santa Fe, New Mexico (in January 2007). Her work is currently on view in Color Chart: Reinventing Color, 1950 to Today, at the Museum of Modern Art (through May 12); and at the Whitney Museum of American Art as part of the 2008 Whitney Biennial (through June 1). Levine divides her time between New York City and Santa Fe.
For more information, please contact the gallery: (212) 255-1105, anthony@paulacoopergallery.com
www.paulacoopergallery.com