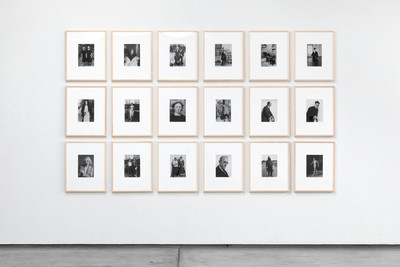 NEW YORK - Paula Cooper Gallery is pleased to present an exhibition of photographs by August Sander and Sherrie Levine, on view from February 16 through March 16 at 521 West 21st Street.

The German photographer August Sander (1876–1964) is remembered most notably for his monumental documentary project People of the 20th Century, a series of more than 600 individual portraits shot between 1910 and the early 1950s and whose organization into classes and professional groups form a veritable archive of German society in the first half of the 20th century. While only published in excerpts during Sander’s lifetime, the project was finally released in book form by Sander’s son Gunther in 1980. Prized for its aesthetic quality, philosophical scope and steadfast pursuit of documentary accuracy, the series is a cornerstone of 20th-century photography whose influence on contemporary notions of portraiture continues to be felt.

The thirty-six photographs on view were printed by Gunther Sander following his father’s criteria and technique. They were selected by Gerd Sander, August’s grandson, and depict an equal number of men and women. Grouped along gender lines rather than sociological categories, they provide a transversal look into the original project and include both well-known and rarely seen images.

An important part of Sherrie Levine’s artistic practice since the 1970s has taken the form of photographic works based on other artists’ photographs. “After August Sander: 1-18” is another distillation of Sander’s original opus into a selection of eighteen pictures of men and women. This act of “looking back” not only holds the potential to reveal latent themes or motifs in Sander’s work; it also implicitly and crucially differs from August, Gunther and Gerd Sander’s in that the images have become wholly Levine’s. Through this barely perceptible and yet immeasurable difference, this transfer of authorship across genders, continents and personal histories, the portraits’ expressive powers resonate anew.

Sherrie Levine: MAYHEM, a major one-person survey, was recently presented at the Whitney Museum of American Art (November 2011-January 2012). In 2010 Levine had a one-person exhibition at Museum Haus Lange, Krefelder Kunstmuseen in Krefeld, Germany. Among many other shows, she has had important exhibitions at ICA, London, 1983; the Hirshhorn Museum, Washington D.C., 1988; the High Museum of Art, Atlanta, 1988; the San Francisco Museum of Modern Art, San Francisco, 1991; the Philadelphia Museum of Art, Philadelphia, 1992; and Portikus, Frankfurt, 1994. Her work is in major public collections in the US and abroad. She lives and works in New York and Santa Fe, NM.
www.paulacoopergallery.com