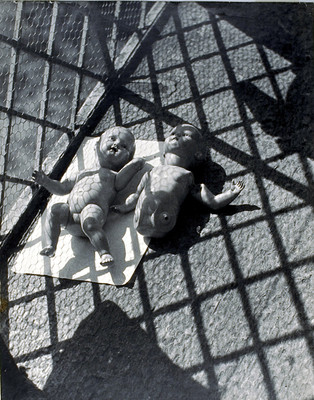 NEW YORK—The Paula Cooper Gallery is pleased to announce DOLLS, a collaborative installation by Sherrie Levine and Joseph Montgomery. The exhibition will be on view at 529 West 21st Street from February 28 through March 28, 2015.

László Moholy-Nagy took the photograph at right in 1926 while on holiday in Switzerland with Oskar Schlemmer and his family. In the disquieting picture, the harsh shadows of a grid railing fall upon two disarticulated dolls. By 1926, both Moholy-Nagy and Schlemmer had established themselves as driving forces of the Bauhaus school. Moholy-Nagy pioneered the privilege of the camera’s eye, while Schlemmer experimented with a mechanistic approach to the human figure.

In DOLLS, Sherrie Levine and Joseph Montgomery present a recreation of Levine’s studio, where two of Montgomery’s recent doll-like wood constructions are displayed on top of Levine’s steel flat files. Made of tapered wood shapes called shims – thin pieces of construction material typically used to fill in a gap – the twin dolls are articulations of modular units that form the basis of an expressive visual language. Set next to one another in varied poses, caught in their oscillation between repetition and difference, they also relate to Levine’s interest in sculptural pairs and more generally in duplication as artistic process. Finally, with their geometric suggestions of gesture and posture, after Moholy-Nagy and Schlemmer, the dolls enact a spatial performance connecting historical modernity to contemporary artistic practice.

Sherrie Levine was born in Hazelton, Pennsylvania, grew up in St. Louis and moved to New York in 1975. Her work has been the subject of many one-person exhibitions, including at the Hirshhorn Museum, Washington D.C. (1988); the High Museum of Art, Atlanta (1988); the San Francisco Museum of Modern Art, San Francisco (1991); the Philadelphia Museum of Art, Philadelphia (1992); Portikus, Frankfurt (1994); Museum Haus Lange, Kunstmuseen Krefeld, Krefeld, Germany (2010); the Whitney Museum of American Art, New York (2011-12). She lives and works in New York and Santa Fe, NM.

Joseph Montgomery is based in New York. In 2014 he had one-person exhibitions at Laurel Gitlen and Peter Blum Gallery in New York. Recent museum exhibitions include an important survey of contemporary painting, Painter Painter at The Walker Art Center, Minneapolis (2013), the solo exhibition Five Sets, Five Reps at Mass MoCA, MA (2013–2014), and a two-person exhibition, Curating the Contemporary: Joseph Montgomery and Ned Vena, Kunsthaus Baselland, Basel, Switzerland (2011). His work is exhibited internationally. He holds a BA from Yale University and MFA from Hunter College.
www.paulacoopergallery.com