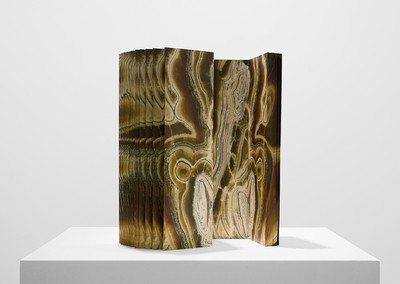 NEW YORK – The Paula Cooper Gallery is pleased to announce Tauba Auerbach’s first one-person exhibition at the gallery, on view at 521 West 21st Street from May 5 through June 9.

San Francisco-born, New York-based artist Tauba Auerbach has described her work as an attempt to reveal “new spectral and dimensional richness...both within and beyond the limits of perception.” Engaging a variety of media, ranging from painting and photography to book design and musical performance, Auerbach explores the limits of our structures and systems of logic (linguistic, mathematical, spatial) and the points at which they break down and open up onto new visual and poetic possibilities.

In her acclaimed series of Fold paintings, first introduced in 2009, Auerbach presents powdery trompe l’oeil surfaces that register the traces of their former three-dimensionality. Painted with an industrial sprayer, the works draw attention to the physical properties of pigment imitating light. Alongside new Fold paintings, this exhibition will include a new series of Weave paintings, presented for the first time in the United States. As with folding, Auerbach uses weaving to reassess and thoroughly transform the flat picture plane. Elusive topographies emerge from the monochromatic works, bringing the viewer into a subtly shifting world of ruptures and continuities, reliefs and recesses.

In addition to the paintings, the exhibition will present new photographs and sculptural objects, including Onyx, a deconstructed material volume printed and bound in book form. As Auerbach once observed, “A book is an X-axis. The format is almost always linear; the content, bound in a prescribed order, marches single file.”* Inspired by a desire to upend this theory, Auerbach resorts to tomography (the method of producing images of the internal structure of an object), allowing the viewer to slice through a solid block of onyx layer by layer, revealing the twists and turns of a mineral narrative.

Tauba Auerbach lives and works in New York City. Her one-person exhibition, Tetrachromat, which opened at Bergen Kunsthall, Norway in November 2011, is now on view at Malmö Konsthall, Sweden, through June 10, 2012 and will travel to Wiels Contemporary Art Center, Brussels. The Museum of Modern Art will show a selection of drawings and sculptures by Auerbach in the group exhibition Ecstatic Alphabets/Heaps of Language, on view May 6 – August 27, 2012. Her paintings will be included in The Painting Factory at the Museum of Contemporary Art, Los Angeles, opening April 28, 2012. Her work has also been exhibited in a number of major museum shows, notably the Walker Art Center’s Lifelike (2012); The Indiscipline of Painting at Tate St. Ives (2011-12); the 2010 Whitney Biennial; MoMA P.S.1’s Greater New York (2010) and the New Museum’s Younger Than Jesus (2009). In 2011 she received the Smithsonian Institution’s Artist Research Fellowship Award.
www.paulacoopergallery.com