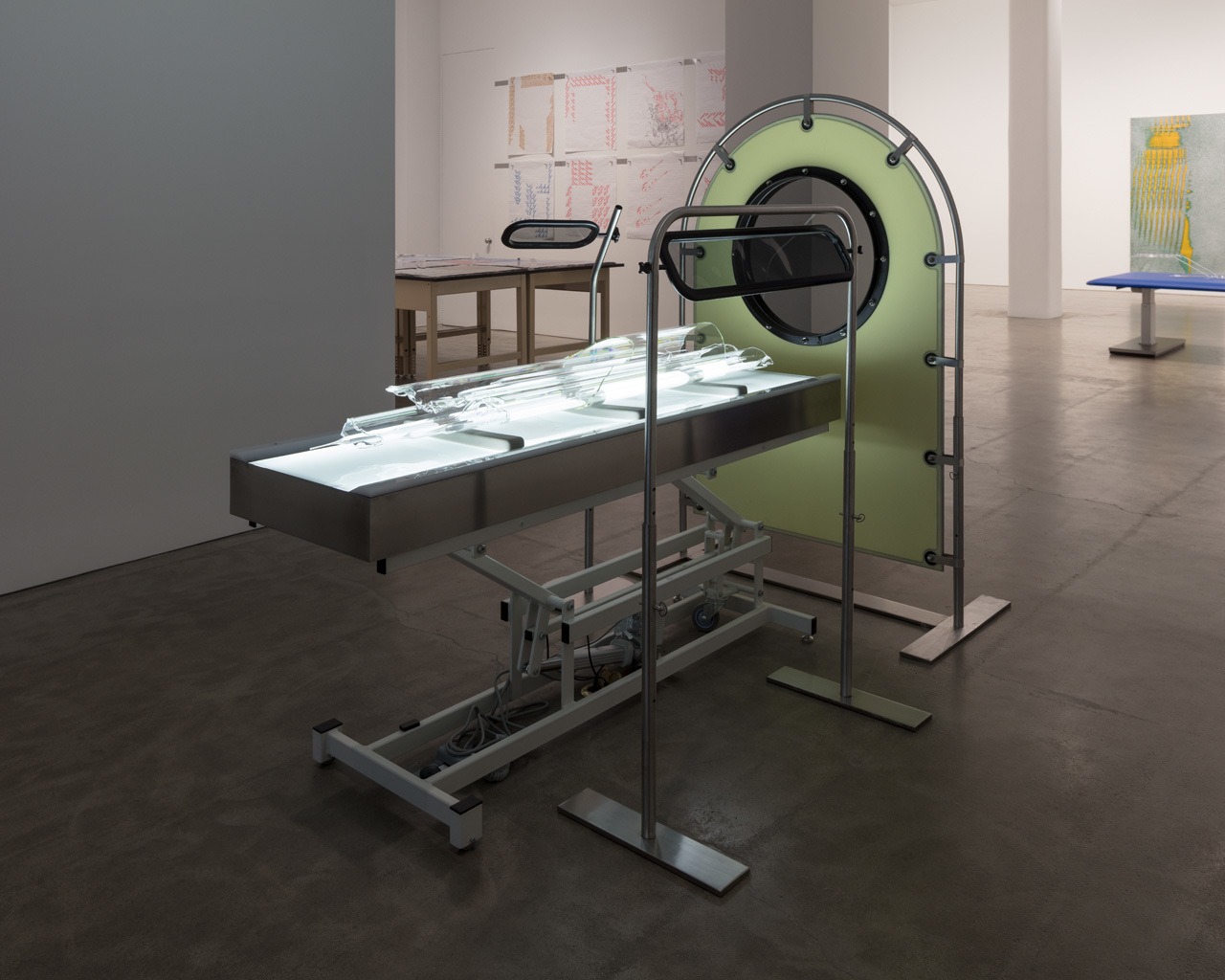 NEW YORK—A BROKEN STREAM, an exhibition of video, sculpture, drawing and painting by Tauba Auerbach, will open on November 10th, 2018, at Paula Cooper Gallery. Working in several new media, Auerbach will probe fluid behaviors alongside new theories of anatomy, mind and the cosmos. The show will be on view at 524 West 26th Street through December 15th, 2018. There will be an opening reception on Saturday, November 10th from 6 to 8pm, and a performance by Greg Fox on November 30th.

Building from her recent exhibition at MOCA Cleveland, A BROKEN STREAM extends Auerbach’s interest in the fields of mathematics and physics as they intersect with form, consciousness and subjective experience. Supported by an investment in crafts such as flame-working, calligraphy and marbling, the works harness various natural phenomena to render the invisible visible.

The central multipart sculpture, Where There Had Once Been a Snag in the Fabric (2018), consists of interlaced rods of glass resting on a cushioned table. Flame-worked by the artist, the threaded, cantilevered structure builds on recent studies in anatomy and dissection, and memorializes a mysterious healing tremor.

For Auerbach’s video work, Pilot Wave Induction III (2018), the artist restages a physics experiment in which a silicone droplet uncannily bounces on its own wave in a vibrating speaker. Illustrating a bizarre wave-participle relationship, the sphere’s unlikely motion appears manipulated after-the-fact—but is actually undoctored. Lighting, focus and shutter speed are responsible for the various prismatic qualities of the footage. The same experiment recently revived discussions in the physics community around an unorthodox interpretation of quantum mechanics put forward by Louis De Broglie and David Bohm. Not in search of proof, Auerbach leans into the qualitative opportunity it offers us—to witness a peculiar combination of purpose and unpredictability that is usually confined to the quantum scale.

Extending the laboratory metaphor, Non-Invasive Procedure (2018), presents a clear specimen on the bed of a large-scale imaging mechanism. Viewed through freestanding lenses on three sides, the vitreous object reveals a hidden spectrum of molecular stress.

A new body of paintings, titled Extended Object, present frozen moments in the movement of a field of droplets. Painted with contrasting electric hues, the glossy horizontal panels are both staccato and flowing, enfolding viscous patterns under layered veils. Though created with a different process, these works pay respect to centuries of paper marbling—a practice Auerbach has previously mined for its haptic wisdom about fluid behaviors.

Finally, in another room of the gallery, numerous unique Ligature Drawings are displayed on tables and casually affixed to the wall, as a tabulation of data gathered through a ritualized calligraphic exercise. Incorporated into a collaborative performance with the musical ensemble Zs in June 2018, the rhythmic, weighted gestures generated both a sound and a score. As an ongoing practice, they function as a kind of automatic writing.