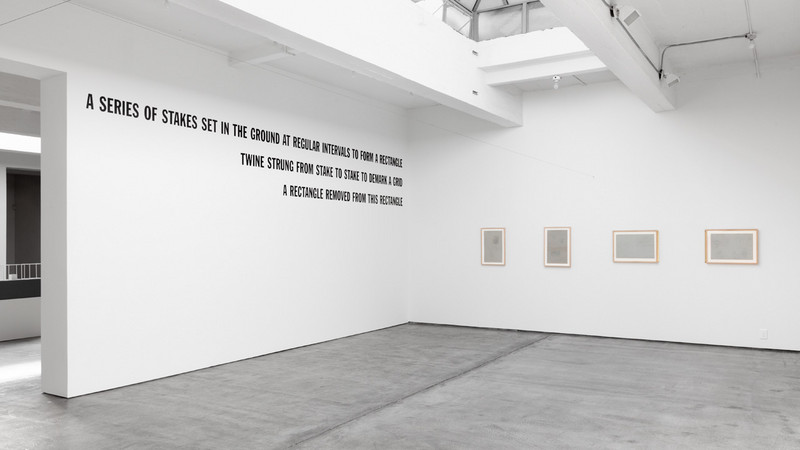 NEW YORK—The Paula Cooper Gallery is pleased to present a group exhibition inspired by the 1968 publication known as the Xerox Book. The show, on view from September 12th through December 17th, will include work from all seven artists who participated in the original project: Carl Andre, Robert Barry, Douglas Huebler, Joseph Kosuth, Sol LeWitt, Robert Morris and Lawrence Weiner. There will be an opening reception on September 12th from 6 – 8pm.

Seth Siegelaub and Jack Wendler published the Xerox Book in December 1968. The project was intended to be a group exhibition in the form of a 64-page printed book. An important early supporter of artists involved in the Conceptual Art movement, Siegelaub’s curatorial work took place both in physical spaces and, most significantly, in the form of books. He invited seven of the artists he worked with—Carl Andre, Robert Barry, Douglas Huebler, Joseph Kosuth, Sol LeWitt, Robert Morris, and Lawrence Weiner–to each contribute twenty-five pages to a book that would be copied (Xeroxed) and printed on 8 1⁄2 x 11” paper.

Siegelaub’s goal for this exhibition-as-book was to create a publication that could be produced and distributed at relatively low cost. Initially intended to be Xeroxed, the process proved too expensive, and the first edition of 1,000 copies was instead offset printed. According to Siegelaub, “This project evolved in the same way as most of my projects, in collaboration with the artists I worked with. We would sit around discussing the different ways and possibilities to show art, different contexts and environments in which art could be shown, indoors, outdoors, books, etc. The Xerox Book ... was perhaps one of the most interesting because it was the first where I proposed a series of ‘requirements’ for the project, concerning the use of a standard size paper and the amount of pages the ‘container’ within which the artist was asked to work. What I was trying to do was standardize the conditions of exhibition with the idea that the resulting differences in each artist’s project or work, would be precisely what the artist’s work was about.” (Seth Siegelaub and Hans Ulrich Obrist, “A conversation: between Seth Siegelaub and Hans Ulrich Obrist” TRANS magazine, No. 6, 1999, pp. 51-53)

The Xerox Book raised questions about the making, display, ownership, distribution, and sale of art. The publication proved to be a landmark in the Conceptual Art movement, and established its seven authors as the movement’s first generation artists.

The exhibition at Paula Cooper Gallery will include works related to each artist’s 25-page contribution in the Xerox Book. On view will be Carl Andre’s 75 Small Wood Square Scatter and a selection of concrete poems; one of Robert Barry’s string installations; text-based paintings and prints by Douglas Huebler; an early definition piece by Joseph Kosuth; a four-part color pencil and graphite wall drawing from the 1968-1969 Drawing Series by Sol LeWitt; Robert Morris’ Crisis drawings from 1962 and 1999; and the first catalogued wall text piece by Lawrence Weiner.
www.paulacoopergallery.com