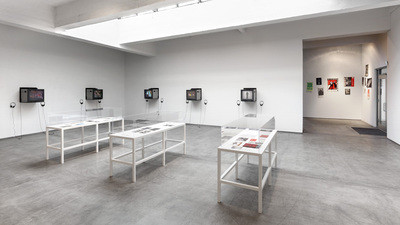 NEW YORK—The Paula Cooper Gallery is pleased to present an exhibition featuring Two Moon July (1986) and other film, documentary footage, and archival material celebrating the early years of The Kitchen. The exhibition, organized by Tim Griffin, Matthew Lyons, and Lumi Tan, opens on January 15 at 521 W 21st Street and coincides with the Getty Research Institute's announcement of its acquisition of The Kitchen's archive.

Directed by Tom Bowes and produced by Carlota Schoolman, Two Moon July was a celebration of The Kitchen's 15th anniversary. The former SoHo location, transformed into an outré, hot-lit theatrical stage with installations by Jonathan Borofsky, Brian Eno, Robert Longo, and Cindy Sherman, served as the background for performances of dance, music, and video. This footage, augmented by clips from existing video and film from the past, made up a vivid portrait of The Kitchen.

Two Moon July opens with a clip of Laurie Anderson performing Difficult Listening Hour, in which the artist delivers an introduction to a fictional radio show. In a snippet from David Byrne's Report from LA, the Talking Heads frontman frantically recites titles of real and imagined movies that he can't wait to see. Short segments of film and video works by Michel Auder, Dara Birnbaum, and Bruce Conner, among others, are interspersed with Bowes' selections from the taped performances, a list which also includes Molissa Fenley, Bill T. Jones, Philip Glass, Arto Lindsay, and John and Evan Lurie. The production, in retrospect, reads like a prescient compilation of works by artists who would become icons of their time.

Two Moon July aired as a one-hour television special on PBS in the autumn of 1987. The production experimented with new modes of presenting the arts for television, reflecting a time when the diversity and creativity of the New York avant-garde was beginning to reach a broader audience, and when contemporary art centers began to explore television as a new instrument for disseminating artworks of various media.

Displayed on monitors throughout the gallery will be recordings of a number of performances, including an excerpt of a Talking Heads concert from March 13, 1976; Men in Dark Times (1982), a performance comprising a series of disparate, dark and sinister scenes by The Kitchen's first dance curator, Eric Bogosian; Tone Death (1981), a concert by Rhys Chatham, the Kitchen's first music director; Rhythm study for Hand, Feet and Voice (1974) by Jon Gibson; Do We Could (1979) by Karole Armitage; and Record Players (1984) by Christian Marclay. Performance stills, announcement cards, and other archival ephemera complement the film and video works.
www.paulacoopergallery.com