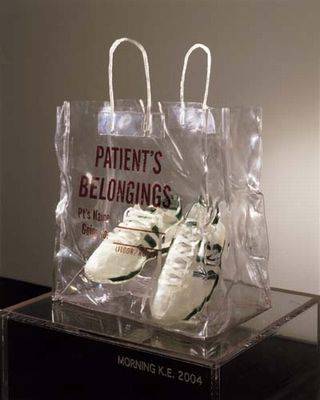 The last fifteen years Edmier worked on a very consistent body of work of, what could be best described as, contemporary statues.
In his last exhibition in Amsterdam he showed the sculpture JILL PETERS (1997), a fusion of his first school love with the ideal girl friend of the period, Farrah Fawcett. This is characteristic of his approach: he combines elements from a personal life with those from our collective history. In a following project this resulted in a self portrait as foetus in the belly of his mother, who at the same time was the mother of the nation, Jackie Kennedy (BEVERLY EDMIER 1967, 1998).

Edmiers body of work resulted in many museum presentations, amongst others in the Los Angeles museum (LAMOCA), the Andy Warhol Museum in Pittsburgh, Tate Gallery in London and the Whitney Biennale in New York.

In the FRANK VETERAN 1980 triptych consisting of three new works that will be shown in the gallery, Edmier treats the subject of the murder of John Lennon in 1980. He does this through the account of the surgeon on duty, who had to certify Lennon dead after he was shot. FRANK VETERAN 1980, MORNING and DOUBLE FANTASY are the titles of these sculptures that are shown on transparent Plexiglas pedestals, like Yoko Ono shows her artworks since the ’60. DOUBLE FANTASY refers to the last record that John Lennon and Yoko Ono released before his death.

Opening in presence of the artist Saturday October 22 from 5 –7 p.m. Digital images are available for the press on request.

- Fair: Artissima, Turin: 11 – 13 Nov. 2005.
- The next exhibition shows new work by Britta Huttenlocher: 10 Dec. 2005 - 28 Jan. 2006.
- Untill 31 Dec. the Albertinum museum in Dresden shows an extensive exhibition curated by Paul Andriesse entitled “Some Trees”. It shows ca. 120 works from antiquity until 2005 in an unusual combination, e.g. a baroque bronze Bernini next to drawings by René Daniëls or wallpaper by Angus Fairhurst behind silverware from the late middle ages from the ‘Grüne Gewölbe’. At the same time the Albertinum exhibits the Oktober cycle by Gerhard Richter.