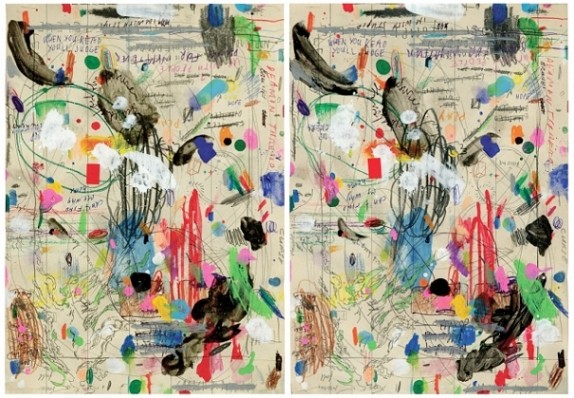 From February 5 through March 19, Galerie Paul Andriesse is pleased to present an installation with new works by Marijn van Kreij (1978, Middelrode), entitled The Passenger, a reference to the famous song from 1977 by Iggy Pop. Besides video’s and prints the installation comprises predominantly drawings and paintings on paper. For the second space of the gallery Marijn van Kreij selected works by artists from different generations that somehow relate to his own practice and ideas. Both exhibitions overlap on visual as well as conceptual levels.
Van Kreij’s exhibitions are comprehensive installations in which each individual work contributes to a web of references. A few recurring series of workhave determined the course of the artist for some time now, such as the double drawings, the series of envelope patterns and the Nirvana drawings. The creative act itself serves as a primary theme within Van Kreij’s practice. The artist exploits the manual nature of his work while questioning notions of authenticity and originality. Van Kreij avoids virtuosity, works relatively quickly, on impulse, and allows mistakes to be present. In his installations the artist tries to enforce an intense, associative way of looking. His work is about these associations and 'copies'. He combines a personal spirit with an analytical and investigative approach.
In The Passenger Van Kreij presents several new monumental works on paper, including the enlarged album cover of the British protest singer Billy Bragg: Talking With The Taxman About Poetry (the title is taken from the 1926 poem by the Russian poet Vladimir Majakovski), a 'landscape' based on some of Pieter Breugel’s allegorical paintings and a magnified, painted copy of a reproduction taken from the book Art as Art, The Selected Writings of Ad Reinhardt (Abstract Painting, 1964). These works constantly force the viewer to wonder: what is the meaning of this image, what does it represent, what do these words mean, here and now, at this moment and in this particular context?
In the back space of the gallery the play of interpretation and consistency continues. Again, Van Kreij approaches the exhibition as a unique moment in time and space. In addition to the works by artists from the gallery, Van Kreij invited a few guests to contribute to the exhibition with specific works. A special notice deserves Sol Lewitt’s Walldrawing # 124: Horizontal not straight lines from 1972 which has been executed with the help of several artists.
Marijn van Kreij has been nominated for the Volkskrant Beeldende Kunst Prijs as well as the Illy Prize. During Art Rotterdam, the Illy Prize will be awarded on Wednesday, February 9. Work of the five nominees for the Volkskrant Beeldende Kunst Prijs will be exhibited from February 19 onwards at the Stedelijk Museum Schiedam. On April 17 during a special TV broadcast of NPS Kunststof TV the winner will be announced.
www.paulandriesse.nl