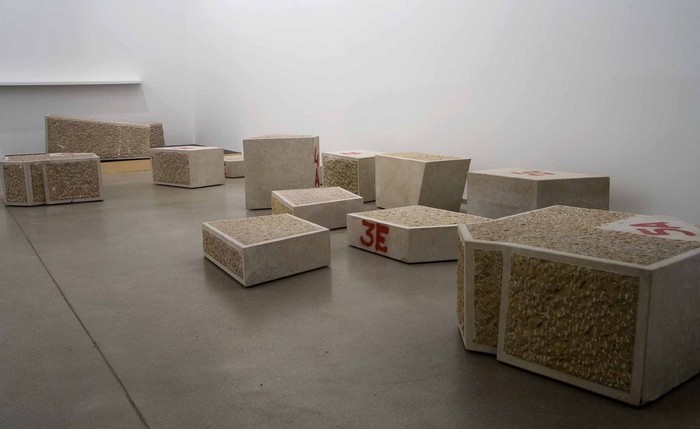 Galería Pepe Cobo is pleased to present Ibon Aranberri’s first exhibition in Madrid, opening on the 14th of September and on show during the month of October. Found Dead comes forth as an extension of the work that under multiple formats and media the artist has developed in the last years. Unlike other episodes of his trajectory in which the exhibition space evoked an archival space, here the exercise of the exhibition adopts its own archetype, configuring itself as an object, an autonomous construction which goes back to the formalism of sculpture.
In this case, the sculptural is condensed in an opaque entity; the origins that have inspired it are annulled in a formal simulacra with the resonance of its own academic definition. This way, the piece stages the irreversibility between the symbolic-communicative functionality of classical sculpture and the auto-referential hermetecism of abstract sculpture, paradigmatic of modern tradition. Found Dead is a dead form, a negation of the narrative possibility.
Delimiting referentiality to a domestic context is a common attitude in Ibon Aranberri’s work. Here, the result is a consequence of a collateral effect, of an unforeseen encounter, of an in-situ approximation within the mechanics of a “field work” focused elsewhere. A repeated monolith appears on several occasions like an accident found along the road, whilst traveling through the ruins of hydraulic infrastructures of the Madrid mountain range: a route which is itself part of one of Ibon Aranberri’s most extensive projects, which under the title of Política Hidraulica, is displayed as an accumulation of framed multiple bird-views which gather images of artificial damns of the Iberian peninsula built along the XX century.
Within the same melancholic order of transformed materiality, the exhibition is completed with various photographs of the scenarios constituted by the industry-workshop in danger of extinction; the constructivist harmony of manual production, inevitably converted into rubble. On the other hand, elements of the interior architecture of the gallery itself, intermingled with the nucleus of the exhibition, blur the perception between the auratic space of the exhibition and the shop-window functionality of an art gallery.
Ibon Aranberri (Itziar-Deba, 1969) lives and works between the Basque country and Berlin. Solo shows: Integration, from the 22nd of September in the Kunsthalle Basel, Switzerland; Mar del Pirineo, Galería Moisés Pérez de Albéniz, Pamplona, Spain. Upcoming exhibitions: Galleria d ́Arte Moderna di Bologna, Italy, and Fundación Tapies, Barcelona. Group shows: Documenta 12, Kassel, Germany; Whenever it starts..., Frankfurter Kunstverein, Alemania; ¿Cómo queremos ser gobernados?, MACBA, Barcelona; Several Ways out, UKS, Oslo, Norway; or Manifesta 4, Frankfurt, Germany, amongst others. His Works are part of various spanish collections and, amongst others, he has been awarded with the Altadis Prize 2004 and was the beneficiary of the Velázquez grant 2003.