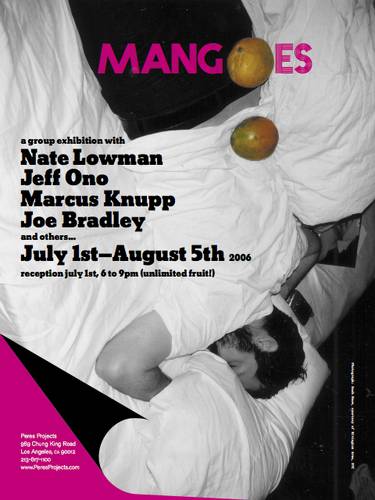 Javier Peres is very pleased to present the group exhibition "Mangoes," a visual ode to the traditional summer show. "Mangoes" will celebrate the innate paradox of these universally known and oft-disparaged events: annual summer group exhibitions that occupy gallery space around the world during the months when collectors, curators, art journalists, and yes, even gallerists leave the galleries behind.*

Which begs the question...

Does a summer show even exist if no one is there to see it?

Maybe. The works by the assembled artists-Nate LOWMAN and Joe BRADLEY from New York, Jeff ONO from Los Angeles, and Marcus KNUPP from Berlin, Germany (via New York)- will not be engaging in a dialogue as set forth by curatory arbitration to form a "show." Instead, each work will be savored for the sake of its intriguing physical presence. And much like the eponymous fruit from the show's title, when carefully selected and placed in an array of treats, they will taste good together.

Nate LOWMAN (b. 1979, Las Vegas) confronts the esoteric, mundane, profane, and the practice of curation. Jeff ONO (b. 1973, Los Angeles) articulates matters of fact via cleanliness, morphing and distortion. Marcus KNUPP (b. 1978, Germany) illuminates hallucinatory dream scapes of specific, provincial, universal importance. Joe BRADLEY (b. 1975, Maine) uses what can be superficially mistaken as a Minimalist vocabulary to demonstrate why humans are probably the fundamentally egotistical, self-obsessed life forms that they are often accused of being.

*(There is a pun that derives from this phenomenon: [This Show] is what happens when "man goes" out of town, but it will be acknowledged exactly once, in this press release, and then never again)