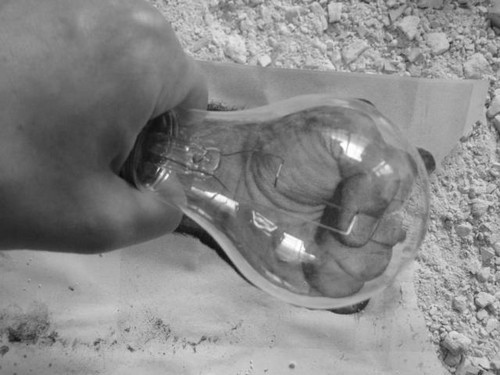 Javier Peres is pleased to announce Paul Lee's first solo exhibition in Los Angeles, "Arm's Length." The New York-based British artist shows sculptural works as well as new video pieces.
Known for his considered use of what are often forgettable materials of the everyday, Lee here expands his range into what appears to be playful territory; towels, light bulbs and soda cans are joined by tambourines, record players, tennis and squash balls. But, where the viewer might imagine a good old-fashioned kinetic romp, these objects of recreation are instead completely suspended. The texture and color of an inert squash ball in Lee's sculpture render it flat, weightless, neither ascending nor descending.
Simple manipulations code the works: a patterned towel acts as metonymic proxy for a tiled fountain just as the blue bulb at its center identifies itself as water – these are not substitutions for Lee so much as contiguous points along a thought's trajectory.
Similarly, the drumhead of a silent tambourine on the wall is painted over with simple geometric color blocks; the construction literally equates art object and instrument, and beyond this the paint itself visually signifies sound – existing where we would expect noise to exist. Lee's treatment of the senses calls to mind familiar riddles and Buddhist kôans ("If a tree falls in the forest and no one is there to hear it, does it make a sound? "What is the sound of one hand clapping?"), but he delves further, suggesting that the possibility of unperceived existence relates directly to unfulfilled desire.
In one video piece, a Xeroxed image of a boy's face is cut in a circle and laid on top of a spinning record. A quarter-section of the Xerox is removed so that the needle hits the record there, playing music for an instant before dragging across paper for the rest of the rotation. The space between anticipation of contact and actual contact, between stillness and movement, between longing and realization all constitute the space of "Arm's Length."
Paul LEE (b. 1974, London) lives and works in New York and will be present for the opening.
He earned a B.F.A. from the Winchester School or Art, England. His most recent solo exhibition, "Harbour," took place at Peres Projects Berlin in the fall of 2007. Paul LEE's works have been included in numerous group shows, including "Jesuvian Process" with Elizabeth Dee Gallery (2008), "Eliminate," curated by John Waters at Alberta Merola Gallery, Provincetown, MA (2007), and "The name of this show is not Gay Art Now," curated by Jack Pierson at Paul Kasmin, New York, NY (2006). His work will also be featured in the Saatchi Gallery's upcoming group exhibition Shape of Things to Come: New Sculpture.
A catalogue of the artist's work is forthcoming.
"Arm's Length" will be on view at Peres Projects from March 1 through March 29, 2008. Hours: Tuesday through Saturday, from 11:00 A.M. to 6:00 P.M and by appointment.
www.peresprojects.com