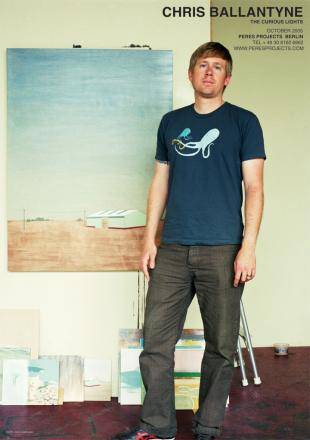 Suburbia-resplendently brandishing a warped mixture of comfort and consumerism and possessing a darkly surreal underbelly-has long fascinated those who have escaped its vast expanses for the fortress of the city. Before Chris Ballantyne began to paint and draw swimming pools, houses, fences, and parking lots, American artists ranging from Robert Bechtle to Gregory Crewdson and filmmakers such as Todd Haynes and David Lynch had mined the terrain of the white picket fence and the tract house. Lynch in particular came to his subject matter much as Ballantyne has: both were born in smallish cities in middle America (Missoula, Montana, and Mobile, Alabama, respectively) and moved from place to place throughout their childhoods due to their fathers' government jobs (Department of Agriculture and United States military). For Ballantyne, this tour of duty through America and its attendant Americana has had the effect of a normalizing of place: Mobile, Corpus Christi, Clearlake, Petaluma, and Fort Lauderdale cease to retain any difference and instead become a smooth panorama of sameness.
Unlike other auteurs of the suburbs, however, Ballantyne rarely populates his tableaux with the people that inhabit them. This makes for a strikingly detached point of view that verges on a kind of totalitarian surveillance enhanced by the bird's eye (or satellite's eye?) perspective from which we view his scenes. A recent painting, Untitled (Labyrinth), 2005, of a square chain-link fence spiraling in on itself in labyrinthine fashion takes this surveillance perspective even further, recalling as it does the circular and symmetrical omniscience of the Panopticon. Ballantyne's repertoire switches back and forth between such dreamt-up symbols and close-ups of "real" spaces, such as "swales," appropriately named swaths of green grass between the sidewalk and the street. The attention paid to such marginalia comes from a life spent on a skateboard, which is why pools make such frequent appearances, and, like the fulfillment of an adolescent fantasy, are often empty. Likewise exposure to the subculture of surfing gives rise to the recurring motif of ocean jetties rendered as architectural abstractions. Surfers-the only figures ever to colonize Ballantyne's images-wait in water with no waves to speak of, their boredom almost palpable.
On the flip side of this cool gaze is a playful, mischievous humor at work here, one that colludes neatly with the artist's application of a visual language indebted to comics and cartoons. Ballantyne tweaks the ordinary just so, creating absurd scenarios that are registered as all the more sardonic by the blasé yet exacting realism with which they are rendered. A fence runs across the middle of a swimming pool, for example, or a corporate office park building is all but submerged by a surrounding hillside-a near future ruin, perhaps. Clearly the forces of nature and culture are duking it out, but we all know who's winning. In a nod to the clear outcome of Manifest Destiny, Ballantyne has mused with wry fascination that soon "neighborhoods" will blanket the country from coast to coast.
Such hardy replication calls to mind a Baudrillardian process of development that has no need to be rational but is rather operational: it merely persists. The caption accompanying Bill Owens's 1972 photograph (from the Suburbia series) of a couple in front of their garage hits upon the latent absurdity of the operationally-driven suburban dream: "Our house is built with the living room in the back, so in the evenings we sit out front of the garage and watch the traffic go by." Likewise, in Ballantyne's images functionality yields to a profusion of irrational scenarios. Sidewalks in the painting Untitled (Retro-Development) (2003) lead to concrete steps, which lead to nothing. Pools proliferate and become connected by passageways, their role as individual, privatized slices of leisure usurped by this neurotic networking. But much as Kafka's tales of Sisyphean attempts to navigate bureaucratic mazes were grounded in the reality of the author's office job, Ballantyne will paint scenes he witnesses without needing to embellish much: a pool in Florida that has washed out into the ocean, a cargo ship packed tightly with mobile homes, or the abovementioned homeless stoops.
Another trope that figures prominently in these images is that of the chasm or void, a conceit excavated in depth by another surveyor of suburbia, Robert Smithson. In his 1967 tour of Passaic, New Jersey, he describes his hometown as a "typical abyss" full of "holes," and "monumental vacancies." In Ballantyne's work the void usually appears in the form of menace-tinged sinkholes that have of late seeped out to consume most of the picture plane, if not the adjoining wall as well. Similarly, wide expanses of cement become desirable for their embodiment of what the artist calls "a manmade emptiness." Indeed, Ballantyne, who is prone to discuss his work formally rather than in terms of its content, is often after a composition in which there is nothing in the middle of the painting; the endgame of this formal pursuit has been his use of a physical gap between panels, so that what lies in the middle of the image is simply white wall. Twinned with this evocation of emptiness is a sense of isolation, reinforced by the myriad fences and yards that delineate private property in America.
Fences, though, seem to be favored by Ballantyne equally for their ability to synch up with the grid that almost always drives the way these paintings look. The allure of the grid may be its offer of a refuge of restraint and control-it handily helps to answer the question of how to paint. Yet its manifestation here also recalls the master-builder subjectivity of simulation-oriented computer games and, as such, comments on our programmatic attempts to control our environment. The irony is, of course, that our environment is equally controlling us, and every day it becomes more difficult to escape the grid.