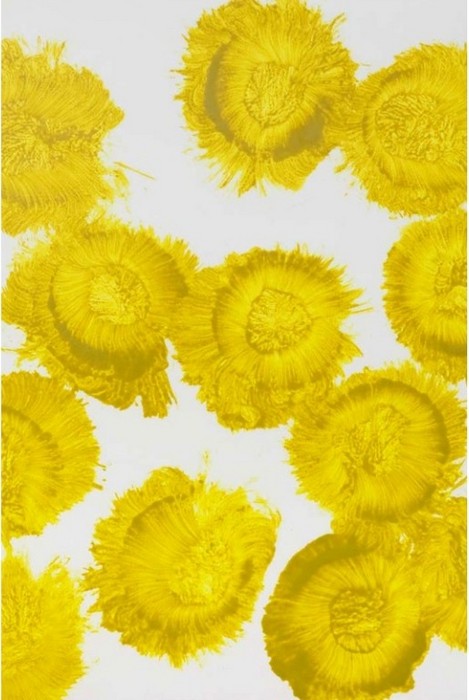 Since the end of the seventies Bernard Frize has extensively created a considerable body of work which has been exhibited all over the world in galleries and museums (such as the Morsbroich Museum in Leverkusen, 2010 at the Musée d’Art Moderne in Paris/ARC, 2003, at S.M.A.K, 2002 and at De Pont, 1998). He just received the Fred Thieler Prize and the Berlinische Gallery will be hosting an exhibition of his works in March.
Known previously for investigating the process by which a painting was made, his work uses a variety of methods to make paintings, often sharing key features of modern industry and providing a reminder that meaning is not given but constructed. Founded on a sequential principle, his paintings are keys to exploring the conditions of their own appearance, deriving in a sense from the execution of a kind of «authorless» automatic painting. Like formal and conceptual musical scores, Bernard Frize’s paintings result from performances with very precise game rules that follow a predetermined structure that also allows for chance.
The exhibition «Ad Nauseam» brings together twenty never-before-seen paintings between the confines of representation and abstraction, seventeen of which are brand new.
The panoramic canvas «Paravent» 2010, was created with six hands working simultaneously to lay down the lattice-knot pattern of lines that form the image. It recalls as much as it is a variation of the modernist grid. «Armen», 2001 to be seen in the same room might now be considered from a narrative point of view.
Imprints of round brushes laid upon canvases, traced on inverted leather hides, body prints to make the image combine elaborate mark making with elusive imagery.
Sensuality and an obvious beauty paradoxically ensue from a style of elaboration that is cold and mechanical. Bernard Frize thus makes visible and palpable the economy of painting by posing the idea as a prerequisite for any pictorial action.
Bernard Frize lives and works in Paris and Berlin.
www.galerieperrotin.com