Dawn Comes Up So Young 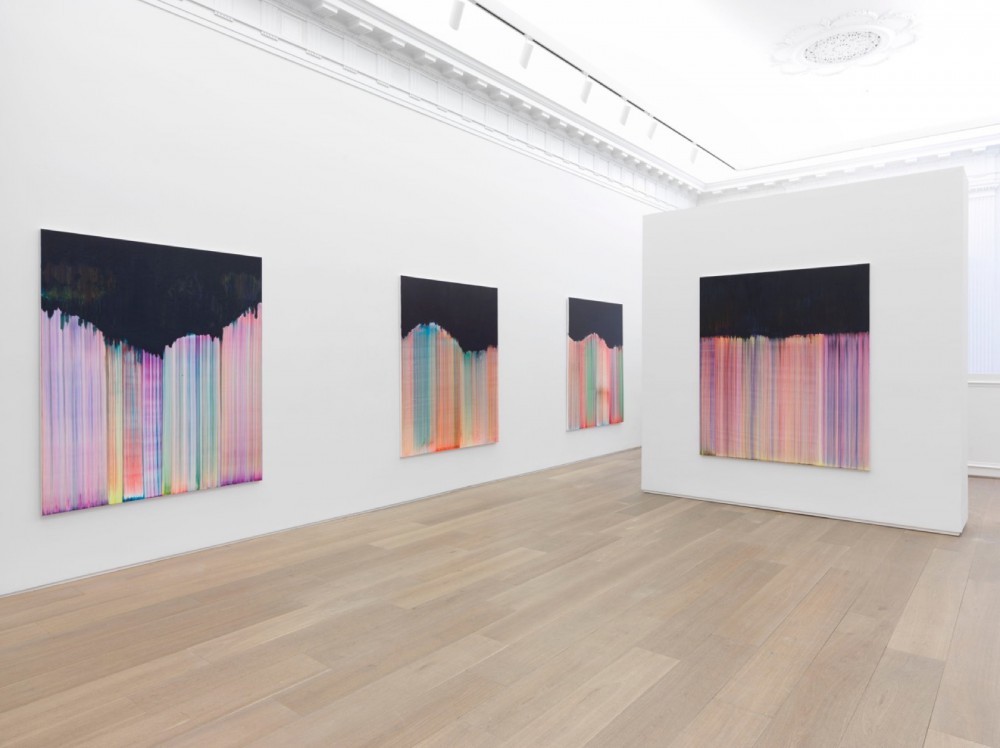 Galerie Perrotin is pleased to present “Dawn comes up so young,” Bernard Frize’s first solo exhibition at the Gallery in New York and his tenth solo show with the Gallery. This exhibition consists of new paintings contextualized by historical works from the 90’s and offers a dialogue on the emergence of an image. Bernard Frize likes to work in series and brings works together in a non homogeneous time

Bernard Frize occupies a unique position in the discourse of abstract painting, due to the austerity of his artistic ideas paired with a simultaneous freedom of implementation. He loves paradoxes in painting: “In order for chance to work, you have to create the conditions that make chance possible, one of which is having a lot of time. It is a rather complex thing to arrange situations in which you do nothing and things happen by themselves”. Colour is another paradox, for it does “not particularly interest” him, despite its vital raw material for his work. By using the colour in a non-hierarchical, experimental, or technical-mechanical manner, Frize enlights painting as a handicraft, while also discounting the idea of artistic creation. Frize lends his work a certain dynamic through the investigation of painting’s contradictions. He mixes synthetic resin with fluid acrylic paint to avoid all traces of personal touch and the emotional effect of a brush mark. The resulting picture planes, alluring and hermetic at the same time, have become a trademark of his painting style.
Elisabeth Madlener

“Painting is the most interesting form of art, connecting visible and thoughts, keeping in balance formal and metaphysical reasons. Newness is not an issue, painting is about adding a new layer in our understanding of the World. Whatever looks important today has roots in the past and, eventually enlightens the future. Present will always stay opaque to itself. Trends make us believe to grasp now something of the reality. The evidently referencial, and the intrinsically nostalgic get to people easily. Is abstraction a quality to define my work? There were always, as long as mankind uses the term, two different ways to understand it: they linger between the neutralisation of the singulars and the collection of likeness (resemblance). The rest is graphic design. I think there is a subtext rumbling through my abstract figures, sometimes close to allegory... or to a figuration”
Bernard Frize

...Actually, the viewer can choose, or alternate. He can follow an analytical perspective of the work, identifying View of Bernard Frize’s studio, Paris. From left to right: “Nuavela”, “Navia”, “Nuova”, “Novea”. Acrylic paint and resin on canvas, aluminium stretchers. 190 x 160 cm / 74 13/16 x 63 inches each “Udon” 1992. Acrylic paint and resin, ink and mother of pearl on canvas. 235 x 235 cm / 92 1/2 x 92 1/2 in the production and tracing its logic, or take a more comprehensive approach, seeing a work as a completed reality in itself that can be experienced, rather than a construction that has to be deciphered. The latter approach requires a certain surrender on the part of the beholder. Just as someone listening to minimal music should simply be in the moment and stop trying to look for the math behind it to enjoy the actual music, so the viewer of Frize’s works is better off dropping the idea that the painting is a riddle that can be solved or a concept that is illustrated. There is nothing to be solved, just as there is nothing behind the painting...There is nothing behind the painting, but in front of the painting there is space for the viewer to approach or step back and watch the image change, to see development while following a movement through a sequence of paintings, or to get entangled in a repeated motif within a single work.
Jurriaan Benschop