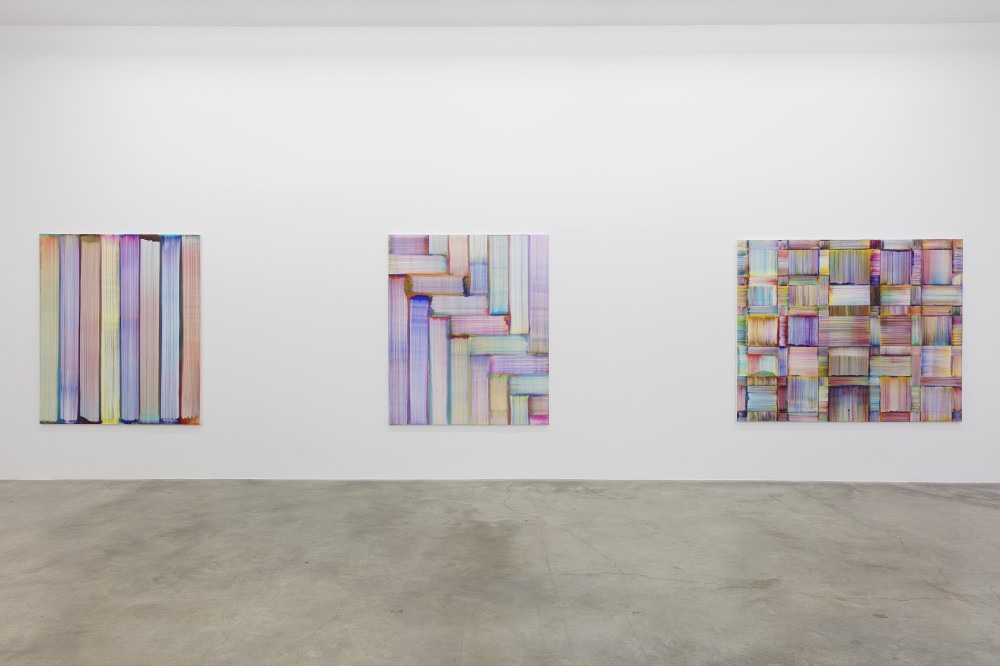 Perrotin Paris is proud to present a new exhibition of French painter Bernard Frize, simultaneously to his personal exhibition “Bernard Frize. Without Remorse” at the Centre Pompidou – Musée National d’Art Moderne (May 29 - August 26, curated by Angela Lampe). Featuring a wide range of paintings, including new productions, this exhibitions mark 25 years of collaboration between the artist and the gallery. The artist, who recently exhibited in Japan (Perrotin Tokyo and Kaikai Kiki gallery), will also be exhibited this Fall at Perrotin New York.

« While regularly revisiting various moments of his past practice, Frize has never stopped exploring new concepts, inventing novel ways to paint (starting with the development, 10 years ago, of processes based on the creation of one painting by multiple people simultaneously), but he has also, since the mid-1990s, abandoned all recourse to what we summarize as “figurative art,” namely the representation of real and identifiable objects or images. It is only by accident or allusion, and by a natural predisposition of our vision, that we perceive this or that painting as evoking a stone, a curtain or a bookshelf. So much so that this action of expansion that first strikes us corresponds to another, of reduction or of disconnection. The paradox is far-reaching and leads immediately to the Frize’s conception of painting since the beginning, which is to constitute it of an ensemble of paradoxes, in other words of propositions contrary to common sense and expectation. Of course, the principle applies at the level of each work considered individually “I always try to get to the point where there is not just one thing in the painting, one thing shown, but that there is a paradox, an antagonism, a difficulty in the work 1.”

“I try to make paintings that one can look at at least twice. I would also say that I try as much as possible to articulate the processes amongst themselves, to recycle the remains of one series for the benefit of another. The monochrome that is drying over there is an example: at one point I put a canvas beneath it so that the drops that fall from it provide me with the beginning of another painting 2.” These words, spoken by Frize more than 20 years ago, have just as much pertinence today. Since then his work has continued to grow using the same autodidactic method. Considering the many avenues he has explored, one of the questions he certainly now faces is that of a renewed, deliberate use of distinctly figurative motifs. In an interview published in Artforum, he remarked on this point: “The figurative pieces I’ve done, the ones that are paintings in the strict sense—not the photographs or scanachromes— are, it seems to me, even more ambiguous than the abstract ones. In the figurative the images function as a sort of primary material that I use without worrying about their references, or else they are used to play with the idea of hidden figuration, of double meaning. In any case, I have never invented an image, I can only paint one in order to put it to use in a demonstration of pictorial order. When, for example, I returned periodically to painting images of pots, I did so in order to work on the idea of ‘failure,’ to accentuate, via the image, a certain exploitation of accident that I was trying to get to. So, for example, I would cover the surface of the painting with “crazing” varnish, or I would paint the image itself out of register. I was trying to represent in the clearest way possible a certain inad- equacy, the fact that nothing fits in these pictures 3.” That there is still much to invent from such a conception of the image is more than likely, especially if one takes into account the way in which all sorts of illicit figurations haunt numerous paintings of Frize’s that can rightly be called “abstract.” In the course of his entire body of work, the logic would be that of an expansion of figurative exploration, through a revitalization of “pictorial intelligence 4.