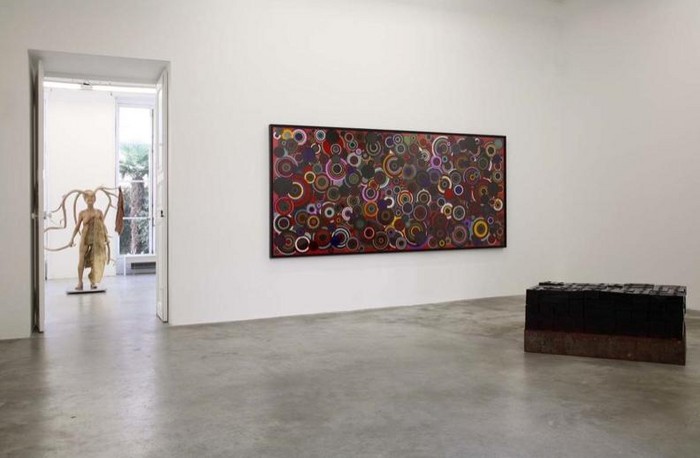 © Installation view
BHARTI KHER
"Sing to them that will listen "

Bharti Kher creates fantastic fables populated by animals awash in a great primal wave of semen-shaped bindis, pantheons of female human-ape hybrids, and spectral hosts in dainty domestic settings gone awry. With the wit and irreverence of a prankster and a mad scientist, she brings a camp sensibility to her fables which unfold against the backdrop of a technological and ecological dystopia where machines, humans, animals, and nature are out of joint. Kher’s hybrid creatures are fabricated from such a dystopian repository which architect Rem Koolhaas defines as “junkspace, a domain of feigned, simulated order, a kingdom of morphing.” Junkspace is a playful and residual spatial disorder that results from the unregulated growth of cities. Through her morphed objects and animals, Kher revels in the discomfort and comedy that result from her encounters with metropolitan and small-town India. Artists engaged with new paradigms of global and national space typically choose one of two paths. They may often reflexively mirror tropes from public culture or retreat into reflective self-inquiries seeking respite from the chaos of the outside world. Kher chooses to reside in-between. Firstly, she draws on her own dual identity as an Indian with a British background. Secondly, she locates her work in-between a society, entrenched in class divisions and prescribed gender roles, that retains a strong desire to be, but has never been, ‘truly modern’ which for sociologist Bruno Latour is also ‘truly hybrid,’ a condition where distinctions between humans and nature, ecology and politics are blurred. Seeking such a blurring herself, Kher finds herself in-between the exterior, a society maladjusted to the vagaries of a global market, and the interior, a world of rituals and repressed desires. For Kher, morphing is a survival technique. It is a unique system of camouflage and deception engaged to resist old patriarchal regimes and to invent new hybrid worlds and hybrid creations. Kher’s creations poke fun at their own trajectory: rootless, as they traverse their in-between worlds.
www.galerieperrotin.com