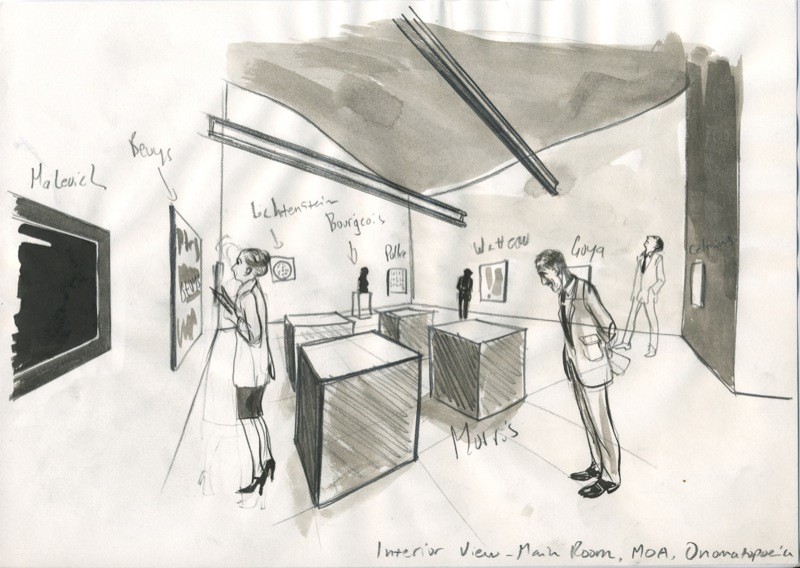 ‘It Means It Means!’ is a ‘drawn group exhibition’ staged in two locations simultaneously - once as a fiction, once as a fact. The first location is the Museum of Art Onomatopoeia on ‘The Island’, a fictional realm that has provided the backdrop to Charles Avery’s artistic and philosophical investigations since 2005. The second location is Galerie Perrotin, Paris.
Curator Tom Morton has been given plans of The Island’s Museum, for which he has devised a show of real works by real artists, from Antoine Watteau to Tino Sehgal, which may only be witnessed through a series of drawings made by Charles Avery and presented at Galerie Perrotin. An example of what André Malraux termed a ‘Musée Imaginaire’, ‘It Means it Means!’ explores what constitutes a site for artistic/curatorial production, and the artist/curator relationship. It is an exhibition that contains an exhibition, and a series of artworks that contains a series of artworks. The real, here, is displaced into the fictional, and the fictional into the real.
‘It Means It Means!’ circumvents almost all of the usual processes and paraphernalia of exhibition making. This ‘drawn show’ does not demand loan agreements, shipping contractors, or teams of toiling technicians - all that is necessary to its creation is a list of works, supplied by the curator Tom Morton, and Charles Avery’s efforts at the drawing board. If freedom from budgetary constraints means that the exhibition might conceivably contain any artwork from anywhere in the ‘real’ world (compare the costs of transporting, say, a large bronze sculpture across an ocean to depicting it in pencil on paper), the fact that it is staged in a fictional museum, in the capital city of a fictional territory, gives rise to further freedoms, perhaps among them the suspension of certain curatorial orthodoxies.
The exhibition’s title offers a response to a question often asked of unfamiliar artworks: ‘But what does it mean?’ To state that ‘It Means It Means!’ is to point to art’s primary property, the fact that it ‘means’ before it ‘denotes X’ or ‘connotes Y’. Perhaps it is only when works from our own world travel to another that this property comes into focus. ‘It Means It Means!’ is, after all, a showcase of exotica, of foreign art made after a very foreign Enlightenment. We may ask whether the Islanders understand these works as we do, or whether they take them in a very different spirit? And what is shown at Onomatopoeia’s Museum when it is not playing host to art produced far from the Island’s shores?
According to Avery, if the Islanders have a concept akin to art, it is that of Sehd~endar. This might be best understood through the following axiom, which is commonly ascribed to Amot Tomamota - the mythical philosopher of the Ifen, the Island’s indigenous people:
Sehd~endar is meant.
Yet all that is meant is not Sehd~endar.
It is that the meaning of which is to mean.
The concept of Sehd~endar may also be parsed through its etymology. In the Iffenish tongue, the word Sehd corresponds to the English ‘self /he/she/it’, Tendar(er) to the verb ‘to mean/to signify/ to go towards’, and Ende to ‘dwelling/home’. Sedindah is also the name of a ‘ghost’, native to the Island. Amot Tomamota has described Sedindah (in opposition to the Noumenon, the elusive quarry of the Island’s roving bands of hunters-after-truth) as the ultimate ThingNot-In-Itself – not a phenomenon, but rather pure subjectivity, independent of the object of subjectivity.
‘It Means It Means!’ features many works drawn from ‘our’ art history that speak to the Islanders project’s iconography and conceptual concerns. Accordingly, the visitor will encounter waves, clouds and air (Vija Celmins, Bridget Riley, Alfred Stieglitz); circles, spheres and portals (Roy Lichtenstein, Eva Hesse, David Hammons, and the aperture of Marcel Duchamp’s 1946-66 “Etant Donnés”); squares, cubes and lines (Kazimir Malevich, Sol LeWitt, Robert Morris, Charles Ray); pairs of lovers, friends, rivals and doubles (Marina Abramovic and Ulay, Felix Gonzalez-Torres, Sturtevant, Antoine Watteau); the short-circuiting of numeric and linguistic logic (Sigmar Polke, Tino Sehgal); and several instances of ‘dogs in art’ (Giacomo Balla, Louise Bourgeois, Francisco de Goya, Jeff Koons). In the Museum’s piazza stands Barbara Hepworth’s monumental Single Form (1961-4), temporarily ‘relocated’ from the United Nations Plaza, New York. Its presence in the city of Onomatopoeia may be read as a gesture of goodwill between our world and The Island, between the real and the fictive.
Alert visitors to the exhibition will note the apparent absence, in Avery’s drawings, of works by some of the artists listed as participating in ‘It means It Means!’. In the case of Art & Language’s Air Show (1966-67) – a work that consists of nothing more than a vast column of air – this is due to the nature of the artists’ chosen materials. In the case of works by Joseph Beuys, John Constable, Roger Hiorns, Lee Lozano, and Philippe Parreno, these are, for now, visible only to the Island’s inhabitants, having been installed by Morton in parts of the Museum that have yet to receive the attentions of Avery’s pencil. Such are the limits, and the possibilities, of a drawn exhibition. The Islanders may amble around ‘It Means It Means!’ at will. The rest of us must imagine the ‘missing’ works existing around unseen corners, in spaces that remain be depicted – out of shot, but not out of mind.
Exhibition organized on the occasion of The Nouvelles Vagues season at the Palais de Tokyo with the support of the Comité professional des galeries d’art.
www.galerieperrotin.com