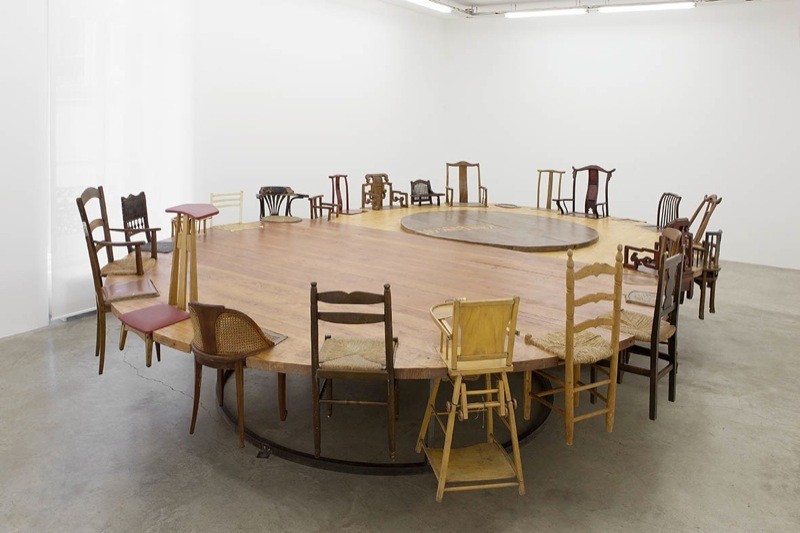 Chen Zhen (1955, Shanghai, China - 2000, Paris, France) isregarded as one of the leading exponents of the Chinese avant-garde and an emblematic international figure of contemporary art. The exhibition, which occupies all spaces at Galerie Perrotin in Paris, offers a rereading of Chen Zhen’s oeuvre, bringing togetherapproximately 30 iconic works created from 1980 onwards,including several major installations, among which “Le Bureaude change” (1996-2004), conceived by the artist in 1996 andproduced after his death. The artist’s immensely rich universe draws from 30 years of personal experience and radically different environments, after going through the Cultural Revolution, the Chinese economic reform and 15 years of living in the West.

The work of Chen Zhen offers multiple ways of interpretation,presenting a sometimes dreamlike and unsettling vision of theworld, turned towards an enrichment of interior life. It is his ownspiritual life that the artist discovers in the 80s during a retreat in Tibet. Suffering from hemolytic anemia since the age of 25, thisspiritual voyage will accompany him throughout his life. Duringhis retreat, he draws scenes from daily life on themes such as “Birth”, “The Pilgrimage”, “The Deceased” (c.1983-1984). He also creates a series of abstract paintings including “Floating Qi - Fragment” (1984), inspired by the “Great Void”, that perfect equilibrium between the universe and the deep heart of human beings, which is so important for Chen Zhen.

Upon his arrival in Paris in 1986, Chen Zhen finds himselfdirectly confronted to the shock of cultures, but pursues his visionaryapproach, rooted in the desire to actively participate in building a new world. After three years of research and reflexion, little bylittle Chen Zhen abandons painting and from 1989 onwards startsworking directly with the object to question the relationship betweenMen, consumer society and nature. For the first time, the exhibition atGalerie Perrotin shows several of Chen Zhen’s paintingsin Paris, facing a series of scultpures by the artist. Through fire, one ofthe natural elements symbolizing the passage from one state to another,Chen Zhen construct glass and metal structures like in “Le Dernier portrait / L’Hibernation” (1991) with coal or in “Bibliothèque” (1999-2000), with burned newspapers, these artificial products, “snapshots of their time”, that are brought back to the natural state of ashes, as if a new beginning was made possible.

Chen Zhen’s work is based on a model of transcultural thought,a concept he described as “Transexperience”: a transcendent place in which the reciprocal friction between various experiences ismanifested. It is a dynamic space, a field of energies wheretensions and contradictions take shape, but also an area of contactbetween fluxes of energy. This triple adaptation process which the artist describes as “Residence-Resonance-Resistance”, Chen Zhenexperienced it first hand when arriving in Europe. The second phase,that of “Resonance” between people, countries or cultures, isparticularly present in his piece “Round Table – Side by Side” (1997), originally part of a three-table project, from which only two were built. “Side by Side” represents two wooden tables joined in the middle and lined with oriental and occidental chairs. This work touches upon the difficulty of intercultural dialogue, which Chen Zhen describes as “the metaphor of the eternal misunderstanding”, which stems from “how the desire to interact is frequently faced with the impossibility of truly reaching across differences in cultures and ideologies.”

As an exile, Chen Zhen becomes aware of this shock of cultures, this void between the East and the West, which he attempts to fill with his own language, as if he tried to create a link betweendifferent forms of knowledge, competence within the fields of art,medicine, ecology and sociology. The references to his birth countryare numerous, such as with “Exciting Delivery” (1999), achrysalid sculpture made out of braided tires, mounted on abicycle, cultural symbol of a fast-changing China. Another example is “Social Investigation – Shanghai 1” (1997), an ambitious social survey of Chen Zhen’s birth town, which attempts to tell the story of the city’s mutations through a collection of drawings and photographs.

It is also through this solitude linked to his “spiritualescaping”, that Chen Zhen turns towards others in order to betterunderstand himself. In “Beyond the Vulnerability” (1999), heconstructs an imaginary landscape, fragile micro-architectural forms made from candles. This work arose out of a one-month stay in Brazil together with children from the favelas of Salvador de Bahia. Through art, Chen Zhen helped the children to understand and think critically about the city by getting them to explore six different architectural styles, the fruit of six different social strata. He pursued this idea with “Un Village sans frontières” (2000), in which the artist used candles to construct a “universal village”, employing a symbolically significant number of children’s chairs – 99 – collected from around the world. “Using candles (in China the candle symbolizes the life of a man)”, he would write, “has a particular meaning: to build a village without frontiers, which it is up to us to begin, but our hope is always directed towards the future generation”.

Coming from a family of doctors, his fatal disease declared at the end of the 80’s, slowly penetrated his work. After all for Chen Zhen, art and medicine were part of the same dialectic, like the Yin-Yang, while remaining complementary. It is this will to live, this creative energy, which finds its inspiration in contradictions, conflicts and beauty of the world, that Chen Zhen passes on and leaves behind him.

In May 2014, the Association des Amis de Chen Zhen (ADAC) in collaboration with Galleria Continua, will publish with Skira, the first volume of the Catalogue Raisonné, covering the years 1977 to 1996, when Chen Zhen first started working as an artist in China, arrived in 1986 in France, where he lived until his death in 2000 and he created his first installations. The volume is divided in five main parts, each one featuring introductory essay by Isabelle Renard and Xu Min, contextualizing the work of the artist, and other interviews and articles by writers such as Chen Bo, Marianne Brouwer, Daniel Buren, Adelina von Fürstenberg, Antoine Guerrero, Chen Jia-Lun and Xu Man-Yin, Bernard Garnier de Labareyre, Jérôme Sans and some texts by Chen Zhen.
www.galerieperrotin.com