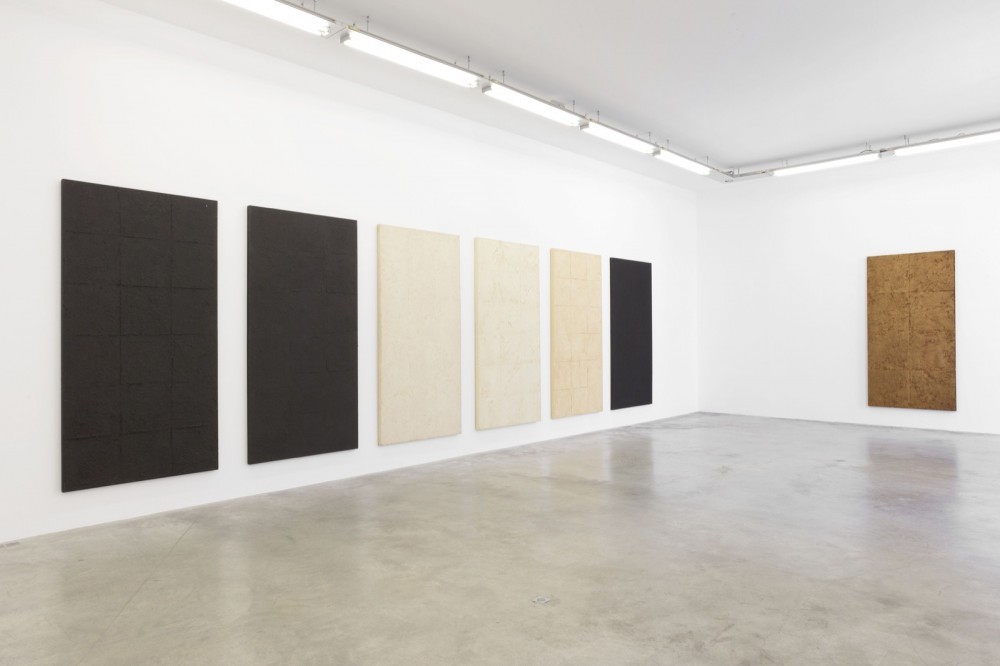 Galerie Perrotin, Paris, presents the first French exhibition by South Korean painter Chung Chang-Sup (Cheongju, 1927–Seoul, 2011), a major figure of his country’s art scene. Made between 1985 and 2005, the pieces on show represent the artist’s late maturity. Chung Chang-Sup worked in series, and the mixture of materials he affixed to his canvases in early works led some to compare him to art informel and matter painting. Most of his works were created with hanji paper, made in a lengthy process using mulberry fiber, one of the most traditional Korean materials.

Chung Chang-Sup graduated from the College of Fine Arts, Seoul National University, Korea in 1951. His first paintings, executed in oil, explored aspects of Western modernism, notably the question of form as it was conceived by the Cubists and of materiality, as in the many experiments of post-war art informel. But for all his interest in the West, the artist also helped forge a new Korean artistic identity, breaking free of Chinese and Japanese influence after the liberation of 1953.

In the 1970s, Chung Chang-Sup founded the Dansaekhwa group with his contemporaries Lee Ufan, Chung Sang-Hwa, Ha ChongHuyn, Park Seo-Bo, and Yun Hyong-Keun. Also known as “the school of white,” the group’s “meditative” aesthetic is said to have been inspired by the restrained beauty and simple forms of the white
porcelain made during the Joseon period (1392-1910), illustrating Korean Confucian ideas. Indeed, Chung Chang-Sup titled some of his youthful works White Porcelain.

Members of the Dansaekhwa group practised monochrome using a limited range of colours: white, black and beige, which is the colour of the hanji paper used by Chung Chang-Sup after 1975, and which gradually became his trademark. The Tak series from the 1980s - which opens the show and is named after the mulberry paper utilized by the artist - illustrates this point. Hanji provided the artist with a material integrated into the support; it could also be used to create delicate effects on the surface of the very dense application of the paper that covered the surface of the canvas by making imprints within its creases. In this way he could preserve the mobile trace of the gesture and the vibrant impact of the creative act on the surface of the work.

Begun in the 1990s, the Meditation series again transformed his work on the surface, by means of a controlled series of gestures that enabled him to “open” painting towards the “pure” monochrome space of the tableau, following the very rhythm of the meditative act. With Chung Chang-Sup, it is the material and the way he alters the material that constitutes the work. The accumulation of the time of its creation keeps with a principle of moderation rooted in Korean philosophy. The work is given its final form through a long process, akin to meditation, in which each degree of elevation or transformation is indicated.

In this series he reveals the pictorial space by edging his compositions with a particularly dense zone of material in relief. His treatment of the quadrangular, monochrome figures is, paradoxically, smoother, with the effect of hollowing out the space in the centre of the work. The border can be seen to represent the physical limits inherent to the materiality of the world that is traversed in the art of meditation, just as one traverses this initial plane to attain the pure space of painting. The apparent simplicity of these compositions, sometimes said to be inspired by minimalism, also question the infinite depth of the painting, which is like an inner landscape. According to Yoon Jin-Sup*, “His creations are placed within an ecological, cosmological and terrestrial perspective which is diametrically opposed to the formalist vision of Westerners.”

The artist continued working on his Meditation series up to his death in 2011. The canvases are almost always organized around a binary relation between the foreground and background, seen as an abyss withdrawn from the modulations of material, work of colour that announces its luminous sources ad infinitum. The Return series from the 1970s, bordering the white infinity of the painting with black ink, constitutes the genesis of the idea through which Chung Chang-Sup invites the beholder to contemplate emptiness, now the receptacle
of our own meditations. Such a proposition joins those formulated for instance by Kazimir Malevich in 1915, by Yves Klein in the 1950s, or by Sam Francis in the early 1960s, who all invested monochrome pictorial space with spiritual but also cosmogonic values.

For Chung Chang-Sup the artwork had to be the result of a harmony with nature, with creation, a transformative and meditative experience whose duration was sometimes evoked by a grid of lines dividing the
canvas into squares, acting as clearly defined temporal sequences. In a note dated 19 August 1992, Chung Chang-Sup wrote that “my work begins only once pre-existing methods, forms and norms have been totally eliminated. Just as an artisan reveals himself through his work, I reveal a world (the making of a painting) from which all (intentional) painting is absent, while appreciating the spiritual freedom linked to the abandoning of all knowledge, intentions, and memories of intentions, memories of my childhood and forgotten details. My hope
and desire is that I will discover another me (through these activities).”

Chung Chang-Sup's work is currently on view in the exhibition "Dansaekhwa", collateral event of the 56th Biennale di Venezia, at Palazzo Contarini-Polignac, until August 15th, and on the occasion of the Year of Korea in France (2015-2016), a major exhibition dedicated to Korean artists - including Chung Chang-Sup, will take
place at the Cernuschi Museum in Paris: "From Lee Ungno to Lee Ufan: Korean Artists in France" (16 October 2015 - January 2016)

* Professor at the Honam University, Art critic and curator of the exhibition “Dansaekhwa: Korean Monochrome Painting” in 2012 at the National Museum of Contemporary Art, Gwacheon, Korea.
Charlotte Waligòra