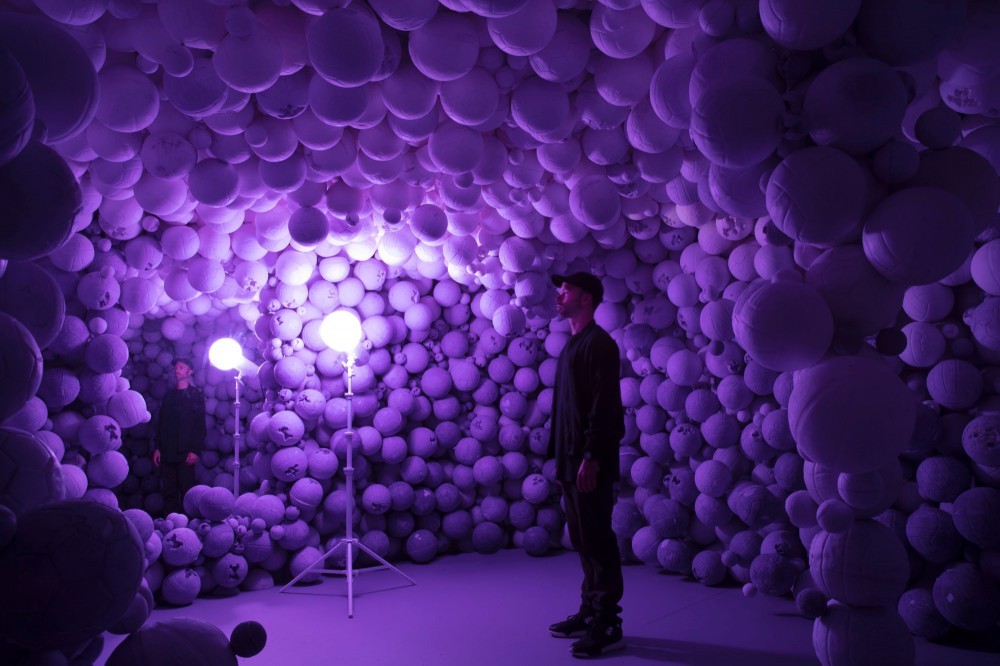 Galerie Perrotin is pleased to announce Daniel Arsham’s first solo show with the gallery in New York. The exhibition will feature sculptural pieces, breakthrough use of color as well as a large scale installation. This will be the artists eleventh show with Galerie Perrotin.

Daniel Arsham’s sculptural works are poetic constructions made up of juxtapositions of form and material: a 16mm film projector rendered in ash and hydrostone, or a 20th century iconic guitar, formed out of white glacial rock dust, its crumbling areas integral to its haunting beauty. Transforming compressed elemental materials such as stone, crystal and ash into carefully chosen important cultural artefacts, Arsham offers a brief glimpse into our current culture and its signifiers, as if seen far off into the future.

The poignant works reflect back to the viewer issues such as the fragility of human civilisation and the ephemeral nature of time, ending up as potentially puzzling and mysterious as any rare figurine or pot unearthed at an archeological site. Purposefully making craft a central aspect to his process, Arsham often allows errors from the moulds or casts to come through, adding a layer of meaning, decay and depth to the work.

In this exhibition Arsham presents on the first floor new works from 2016, such as Blue Calcite Basketball Jersey, Blue Calcite Basketball Tower, and Blue Calcite Bulls Jacket amongst others. By using this particular crystalline calcite, each piece radiates an intense blue, the shock of color opening up Arsham’s artistic lexicon, a byproduct from his research and results into correcting his inherent colorblindness. Arsham introduces in this exhibition color in his sculptural work, as well as a combination of different elements, for the first time.

On the lower floor of the gallery, the viewer encounters an immersive architectural installation that hints, like a lot of the artist’s oeuvre, at a participant and potential narrative through absence. The piece is an expansion on Daniel Arsham’s previous works exploring archeology, fiction and the collapsing of time.

In the short film Future Relic 02, “The Searcher” (played by James Franco) bestows a plaster camera to a crystalline glass figure (cast from/by Daniel Arsham), providing this “Blue Calcite Football Jersey” 2016. Blue Calcite, pigment, hydrostone. 41 × 34 × 3 1/2 in / 104.1 × 86.4 × 8.9 cm Daniel Arsham “Circa 2345” Galerie Perrotin, New York September 15 - October 22, 2016 partial being a lens to see the world. When The Searcher subsequently peers into the prosthetically enhanced eye of Arsham’s avatar we glimpse a roaring sandstorm –in color– as it tears across a desert plane towards us. The scene is so great and terrifying at once that The Searcher recoils in abject wonder, unable to share this mechanical eye one second longer, tearing the camera from the figure’s arms as he shatters its countenance. That which is giveth is thusly taken away, but that which it opened cannot be unseen. Through advances in biomedical prosthesis, the heretofore color blind Arsham began to wear corrective contact lenses earlier this year that allowed him to see a number of colors for the first time. It was by all fair measures an epiphany for an artist whose personal and artistic identity has been formulated in/by the tonal values between black and white. And yet, while augmented eyes have opened a vast new spectrum of materials for Arsham to employ, the world of expanded vision quickly became an ambivalent experience for the artist. In the first bodies of work created since he began to use these lenses as tools, we will see how the widening of perspective has paradoxically prompted Arsham to delve deeper into the psychological infrastructure of social blindness; of the hermit, the hoarder, the myopic visionary. This new dimension of color tints the patina of the path but does not alter the course of the artist’s anachronistic archaeology. It translates an expanded chromatic spectrum into a two-way lens that also sees backwards, behind the eyes of the obsessive recluse – the solitary maker of worlds real and imagined – that has become as much a signature of Arsham’s objects, environments and films as a surrogate.

As we move through the exhibition inside Galerie Perrotin –past Brancusi-esque columns of athletic balls and reliquaries of sports jerseys, hats and jackets– we find our way to a culminating cavern in the lower level, constructed entirely of balls that fluctuate in size. Floating somewhere between natural formation and the “fruit” of manmade obsession, Arsham characterizes this space –which coalesces in/ around a mirror– as a “hermit’s lair.” In so doing, casting this crystalline arena of self-reflection as the mindscape of an absent, yet omnipresent author, he anticipates the architecture of his upcoming exhibition in Atlanta. Here we will enter the mind of a secluded figure manifest as a Japanese rock garden, where each constituent piece is nebulously described by a child’s voice without knowing its original intent. Arsham likens this kind of speculative archaeology to an alien cataloging objects that are entirely foreign, unfamiliar and thereby, fascinating: translating the absence of context into an impenetrable, but no less alluring mystique –one that is more sensed than seen. By reconfiguring everyday items into arcane formations he suggests the aesthetics, more than the exercise of order– evoking the cryptic enterprises fabricated by the minds of those isolated on the fringes of society. In this light, in concert with Arsham’s continuing interest in science fiction, Stephen Bartholomew’s 1963 short story “The Hermit of Mars” is an especially insightful foil.

Combining elements of a classic Western with Cold War hysteria, Bartholomew tells the tale of archaeologist and anti-hero Martin Devere who argues “the only things that were worthwhile in life were pure art and pure science.” After being chosen to be part of mankind’s first colony on Mars due to his “unchallenged scientific reputation,” we meet Devere 35 years after everyone else has left –living in a pressurized igloo and receiving supplies from Earth in exchange for his ongoing research, reports and meticulous collection of mysterious artifacts. Devere “turned up the first fossil ruins far beneath the desert sand” and hates to send back any to his home planet, lovingly polishing esoteric objects and ruminating over an ancient Martian scroll –an “epic poem” “nearly a million years old”– that he cannot decipher. When Devere is forced into saving the Earth from nefarious agents planning to launch a nuclear weapon from Mars, we are reminded of Dr. Matthias Rey –Savior of Mankind– whom we meet in Arsham’s short film Future Relic 03. Hoping to lessen the gravitational pull on our future planet’s tides and remedy Earth’s increasingly unstable climate, Rey is the scientist responsible for excavating the moon – providing temporary respite before the storms redouble and his legacy is left in shambles.

Devere is more successful in his actions but less humanitarian in his aspirations, caring little for the fate of Earth until the evil agents threaten his “diggings” and artifacts. He is dismissed as an “old senile nut” but employs his neuroses, marginalized status and implied alien heritage to thwart the intruders and protect that which is ultimately most valuable to him –his isolation. The hermit-turned-hoarder is a recurring trope in Arsham’s mythology, even if we most often meet this figure in absentia, through his/her archives and architecture. As we warily make our way through the hermetic caverns and cloisters Arsham has fashioned in New York and Atlanta, and survey the thousands of crumbling relics he continues to collect and categorize, a psychological cartography is revealed. Author Franz Lidz studied the infamous “hermit brothers of Harlem” –Homer and Langley Collyer– who amassed “one of the world’s legendary collections of urban junk” in the 1930s. And while their legacy is now a cautionary caveat –of men swallowed by tunnels carved out of neck-deep rubble, elaborate boobytraps and their own paranoid pathologies– they have simultaneously become the subjects of artistic re-evaluation as eccentrics exercising “a very pure logic.”

Professor Randy Frost reinforces this observation, arguing hoarders are “avoidant” and rarely violent, until their collections –and the opaque epistemology they represent– are threatened. We can never truly know how every piece of detritus contributes to these overarching lexicons like a cog in the proverbial machine, but there is a tantalizing appeal in tracing the uncanny rationale. The originator’s body is lost in this aggregate but his/her organizing logic billows through every passageway like the jackets, hats and jerseys that float across the walls of this show. Rippling further through the wind-thrust sands that both Martin Devere and The Searcher peered into, mesmerized by their riches and dangers, take pause as we enter the next strata of Arsham’s cerebral excavation.

About Daniel Arsham
New York based artist Daniel Arsham straddles the line between art, architecture and performance. Raised in Miami, Arsham attended the Cooper Union in New York City where he received the Gelman Trust Fellowship Award in 2003. Architecture is a prevalent subject throughout his work; environments with eroded walls and stairs going nowhere, landscapes where nature overrides structures, and a general sense of playfulness within existing architecture. Arsham makes architecture do things it is not supposed to do, mining everyday experience for opportunities to confuse and confound our expectations of space and form. Simple yet paradoxical gestures dominate his sculptural work: a façade that appears to billow in the wind, a figure wrapped up in the surface of a wall, a contemporary object cast in volcanic ash as if it was found on some future archeological site.

Structural experiment, historical inquiry, and satirical with all combine in Arsham’s ongoing interrogation of the real and the imagined. In 2004, Arsham participated in the group show Miami Nice at Galerie Perrotin (Paris), which began to represent Arsham in 2005. As one of the founders of the seminal Miami artist-run spaces, “The House”, his interest in collaboration began early. In 2004 legendary choreographer Merce Cunningham asked Arsham to create the stage design for his work eyeSpace. Following this Arsham toured with the Merce Cunningham Dance Company for performances in Australia, France, and multiple locations in the United States. Arsham’s first stage design for Cunningham was acquired by The Walker Museum for its permanent collection. Despite never being trained in stage design he has continued his practice in stage, collaborating with Robert Wilson, as well as a sustained collaboration with Jonah Bokaer who was a former Cunningham dancer. Arsham’s collaboration with Bokaer includes works performed worldwide at locations such as The New Museum, IVAM in Spain, and The Hellenic Festival in Athens Greece, Jacobs Pillow dance festival in Massachusetts, as well as the prestigious Festival d’Avignon. Arsham’s most recent collaboration with world renowned musician and producer Pharrell Williams involved the recreation in Volcanic Ash of Pharrell’s first keyboard. To further expand the possibilities of spatial manipulation and collaboration, Arsham founded SNARKITECTURE in 2007 with partner Alex Mustonen to serve new and imaginative purposes. Their multidisciplinary practice has included collaborations with designers Public School and Richard Chai, the entrance pavilion for Design Miami, as well as a complete line of functional design objects.

Arsham’s most recent enterprise is production company Film the Future, founded in 2014 in collaboration with director/ cinematographer/editor Ben Louis Nicholas and producer Courtney Andrialis. Productions to date include Arsham’s 9 part science fiction film series Future Relic (starring among others James Franco in the second part and Juliette Lewis in the third); a short film for Hennessy 250; and a short film for Jefferson Hack’s MOVEment series, in collaboration with Calvin Klein, Jonah Boaker and Julie Kent

Arsham’s work has been shown at PS1 in New York, The Museum of Contemporary Art in Miami, The Athens Bienniale in Athens, Greece, The New Museum In New York, Mills College Art Museum in Oakland, California and Carré d’Art de Nîmes, France among others. A first monograph of Arsham’s work was published by the French Centre national des arts plastiques. Galerie Perrotin has published 3 monographs in 2008, 2012, 2015 including texts by Steven Matijcio, Marc Quinn, Jane Rendell, and conversations with Felix Burrichter, Steve Pulimood and Robert Wilson.
www.perrotin.com