The Angle Of Repose 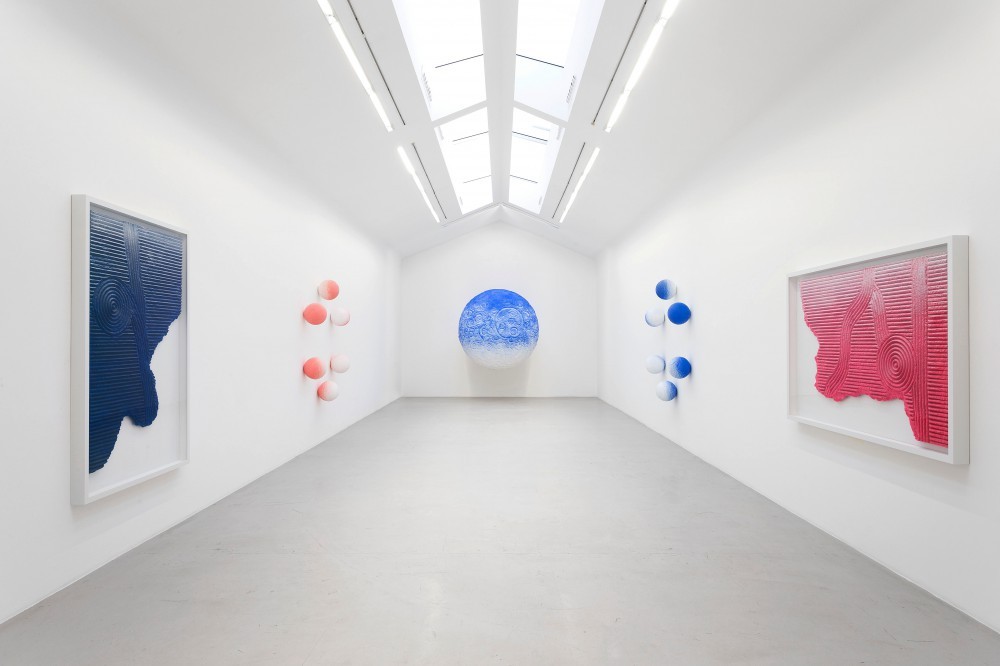 For his new exhibition at Perrotin in Paris, New York-based artist Daniel Arsham revisits permanency while continuing to expand on his interest in Asian cultures, planetary cycles, and his own mortality —a subject inherent to his artistic practice.

Arsham, whose work has been widely exhibited internationally, questions not only the reception of a piece, but the influence a culture may have on new bodies of work. Since the very beginning, Arsham has worked with the notion of memory and time, intertwining his interest with architecture, while storytelling and science fiction have
always held a significant importance in his work. The artist’s personal memories of surviving a hurricane in 1992 made Arsham more sensitive to this idea of finiteness and is something we encounter in his reproduction of objects that deal with obsolescence. His recent exhibition in Korea, which revolves around toys and animals, is a continuation of the artist’s Fictional Archeology series first shown in 2013. Encasing the theme of a global archeology of the future and poetic ruins, these works tread a fine line between past and future. The objects could be discoveries from the distant future, artifacts from our current civilization that the artist has carved out and eroded.

This approach is present in Arsham’s exhibition in Paris. Never forgetting the past practice of rigorously selecting objects, placing it amongst a certain conceptual process, and then meticulously reworking them at his studio. Gritty and terrestrial globes with surfaces of the moon correspond to paintings made from sand with geometric compositions. Arsham wanted to respond and match the space in the Marais, explaining “I wanted to play with the lighting of the gallery and the way it directly or indirectly enters the space, with no connection at all with Paris’ total history.” He says the exhibition would have been the same if it had been in the United States or Asia—even if childhood remains a strong topic in Asia, topic that also inspired the toys created for his exhibition in Korea earlier this year. In 2005, Arsham’s first Parisian representation touched on the notion of time as well and was entitled Homesick. He displayed his interest in architecture and construction more directly back then, blending imaginary structures with nature, while tying in modernism.

It’s as if he has taken some distance these last few years. Arsham is now exploring a passion for astrological timelessness and Eastern philosophies. The craters that trim his globes or sand paintings are one of his emblematic trademarks, always referring back to the idea of infinitude, as well as unsettling fragility. He adds, “In this exhibition, the question of time is seen on the one hand through the moon cycle, creating a link between this star and the decadence of objects. They appear as if they came from the past, all while playing on the ambiguity of the residue that could have clearly only come from the future. When it comes to the sand paintings and the gardens composed of vivid colored pigments, they come from my research on Tibetan mandalas. In Japanese culture as well, for hundreds of years these same shapes and patterns have been explored and sometimes even modernized in their composition. I’m talking about the conception of cycles that seem static and unchanged for life, when in fact they are reused on a daily basis. My sand paintings are like a fixed version that seems temporary and ephemeral, when in fact it’s the opposite and they play on the idea of representation. My primary subject is therefore this connection between permanent and impermanent”.

Moreover, it is an analogy for a creative process that finds itself pushed and energized by the different locations and cultures wherever his work is exhibited. The understanding of his work can sometimes be mistakenly interpreted based on his nationality. Upon seeing the planets, one could think an allusion is made to the quest of outer space or to a Pop side the pieces evoke. Daniel Arsham finds himself more and more introspective and connected to an uchronic school of thought (if the past hadn’t been the past, what would the present or future be?). He absorbs different cultures, rides on temporalities, happily gazing in different directions, often on the sidelines of contemporary art. This intimate work is nowadays strictly associated to slow speed and contemplation, even though Arsham never fails to concurrently communicate, through the high-speed and oversaturated social media platforms. But the time dedicated to an exhibition is different, intimately resting, as the title suggests: “The Angle of Repose” is also, by definition, the angle at which a material will naturally bend
until adopting a conical shape. It is a question of balancing particles, or physics, combined with the game of chance and a certain willingness to let go...