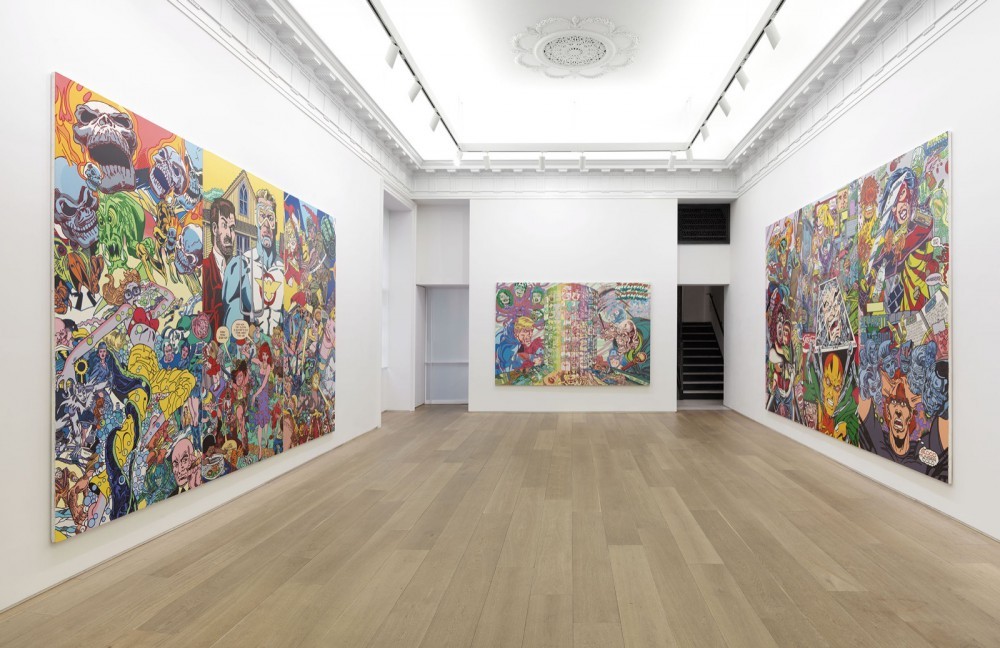 A conversation between Erró and independent curator Bartholomew Ryan will take place at 11am on Tuesday, March 1 at Galerie Perrotin, New York. On the occasion of the exhibition, a 112 page monograph will be published by Galerie Perrotin and Editions Dilecta including texts by Bartholomew Ryan, Arthur C. Danto, Jean-Hubert Martin and Danielle Kvaran in English and French.

Galerie Perrotin, New York is pleased to present the first exhibition dedicated to Icelandic artist Erró (Ólafsvík, 1932), a prominent figure of Pop art and Figuration Narrative in postwar Europe, with an ensemble of 15 paintings made between 1959 and 2016.

As the forefather of painted collage (that is the practice of painting strictly after preparatory montages of ready-made images), Erró has developed since the mid-1950s a satirical and exuberant saga of consumer society and global politics, in which politicians, superheroes, tyrants, aliens, celebrities, warriors and lovers collide. In an essay published in 1999, late American art critic and philosopher Arthur C. Danto concluded: ‘As for the role Erró plays in the history of art, it can be said that he has succeeded, all by himself, in bringing Pop Art into its flamboyant baroque1’. That says it all.

After studying classical painting, fresco and mosaic in Oslo, Florence and Ravenna, Erró moved to Paris in 1958, where his friend, artist Jean-Jacques Lebel, introduced him to the Dadaist and Surrealist circles, including Marcel Duchamp, André Breton, Max Ernst, André Masson and, among many others, Roberto Matta, with whom he regularly practiced four-handed drawing. The influence of these artists’ unconventional and fanciful spirit can be seen in his early works and, more specifically, his fascination for the mechanization of humankind at the time. For instance, the oldest painting presented at Galerie Perrotin, “The School of New-Par-Yorkis” (1959, from the series “Le Monde de l’art”), is a vitriolic portrait of Jackson Pollock, who is figured as a dinosaur skeleton dripping onto a canvas in front of another tachist painting, typical of Hans Hartung. Meanwhile, two robot-disciples are shown zealously daubing paint with their telescopic arms and intestine cables in the purest, geometrical and gestural, styles of abstraction.

Firmly believing that ‘painting must be of its time and a reflection of its age2’, Erró rejected Abstract expressionism and the Paris “Good Morning America”, 1992. Alkyd paint on canvas. 300 x 450 cm / 118 1/8 x 177 5/32 inches. Photo: Guillaume Ziccarelli © Erró/ ADAGP, Paris and ARS, New York, 2016 School, which prevailed in the postwar art world on both sides of the Atlantic. He instead let ready-made images progressively invade his work until his figurative practices of collage and painting merged for good in the early 1960s. Indeed, while he had already transposed some of his collages onto paintings as early as 1959 with his series “Meca-Make-Up”, in which he hybridized human body parts with mechanical components, and rediscovered that radical gesture in 1963 with his series “Ombromanies”, it wasn’t before 1964 during his first trip to New York that he systematized his two-stage compositional technique and left behind his own imaginary representations to resolutely draw on the infinite resources of mass media and pop culture.

Upon his arrival in New York at the turn of 1964 and within a span of only four months, Erró fully immersed himself in the lively avant-garde milieus of the new art capital. He met Robert Rauschenberg and Jasper Johns. He participated in Daniel Spoerri’s “Snare-Pictures” along with Marcel Duchamp, Andy Warhol and Roy Lichtenstein. He frequented the Gramercy Arts Theater, run by Jonas Mekas’ Film-Makers’ Cooperative. He attended Allan Kaprow and Wolf Vostell’s action-lecture “The art of the Happening” at the Cricket Theater and also took part in the latter’s décollage-happening “You” in Great Neck, Long Island. His first American solo exhibition took place before the end of his trip at Gertrude Stein Gallery, which a critic of Art Voices described as the work of a ‘true Pop-Surrealist‘.

However, between happening, underground cinema and Pop art, it wasn’t just the artistic effervescence of New York that definitely convinced Erró to make his original practice of collage the exclusive matrix of his spectacular pictorial oeuvre. It was also and most importantly the city itself with its irresistible and unprecedented flow of images produced by and for mass consumption, as well as the great vitality of its pop culture, while providing him with countless iconographic sources. He returned to Paris with a suitcase full of images, which he had notably collected in supermarkets as they didn’t exist in France yet, and immediately realized “Foodscape” (1964, from the series “Retour d’USA”), the first of many allover compositions to come, here celebrating his discovery of American opulence with a flood of cans and cheese.

Since his first encounter with New York, Erró has never ceased to amass and thoroughly archive in his Paris studio all sorts of illustrations from all over the globe, ranging from simple clippings of newspapers, magazines and advertisements, to propaganda posters, cartoons, comic strips, reproductions of artworks, postcards and photographs from mail-order catalogs or any mass printed image that stirred up his insatiable curiosity. With a pair of scissors and often an opaque projector, he has been relentlessly painting for over fifty years the incredible and kaleidoscopic portrait of our contemporary society, while continuously feeding with new ready-made images the flamboyant clash of cultures, civilizations and ideologies that is central to his aesthetics. ‘Collage is the most exciting part of the work, the part where I have the most freedom. It’s almost a kind of automatic writing,3’ he said. Always coated with a thin layer of irony, his paintings are also often organized in thematic or geographic series at the improbable crossroads of current affairs and popular fantasies.

At Galerie Perrotin, Erró’s chaotic yet incisive visions of the world include “Lovescape” (1973-1974), which spread the love between machines, humans, notably figures borrowed from the history of art, and the whole fauna of the Earth in a phenomenal orgy. Both bucolic and grotesque, this scene is reminiscent of “The Garden of Earthly Delights” by Hieronymus Bosch (circa 1500) and appears at first glance like a monstrous battlefield. In the thick of the Cold War, whereas “Stukas” (1974) bluntly precipitates Nazi dive bombers in Vietnam, other Russian caricatures regarding Western foreign affairs whirl into the vertiginous perspectives of “La Bombe” and “Nato” (both 1977, from the series “L’Ouest vu de l’Est”). ‘Any historical event or armed conflict is accompanied by a war of images. For an artist like me, who uses media images to make collages, the starting points of my paintings, there is no shortage of materials,4’ he wrote. Finally in “Sarajevo” (1996, from the series “Target Practice”), which Erró made in reaction to the siege of the capital during the Bosnian War, it is an ethnic conflict between superheroes and villains that actually spreads unspeakable terror among civilians.

As a matter of fact, among the many American references that Erró has used throughout his career, comic characters – especially superheroes – cured his primary obsession with robotics while considerably pervading his art to the point that he even dedicated an entire series to them in the late 1990s, his “Saga of American Comics”. They are the central subject of the allover compositions “Good Morning America”, “Captain America” (both 1992) and “Wonderwoman scape” (1999) at Galerie Perrotin. That said, the artist’s survey continues with a completely different kind of pop icons in more recent paintings, including “Dogman” (2012), which stages the rapper Snoop Dogg with a bulldog and a sheep in shorts, and even more implausibly “Poutine et Miley Cyrus” (2013, from the series “Moscou-Berlin-Paris”), in which the singer twerks while sticking out her notorious tongue next to a topless caricature of the Russian president and Alfred E. Neuman, the mascot of Mad magazine.

Whereas Erró firmly renounced inventing his own imaginary figures to seize instead, voraciously, the inexhaustible iconography spread by mass media for over fifty years now, his paintings have never ceased to demonstrate, ironically, that reality is greatly stranger than fiction. In fact, while masterfully orchestrating through collage the absurdity and violence of our contemporary propagandas, whether political, commercial or cultural, his chaotic and outlandish visions trigger more than delirious impressions. In this regard, Erró’s contribution to Pop art is all the more exceptional that his oeuvre is deeply hallucinatory.