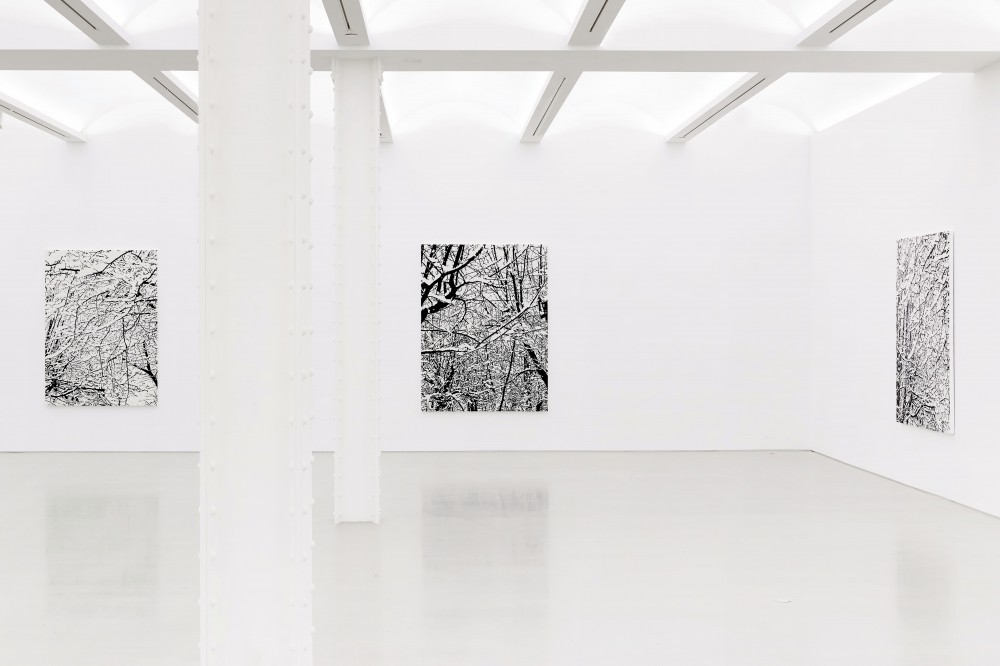 Perrotin New York is pleased to present “Snow Forest”, the fifth solo exhibition at the gallery by Farhad Moshiri. The exhibition is coinciding with “Go West”, the first retrospective in the US of Farhad Moshiri, currently held at The Andy Warhol Museum in Pittsburg through January 14, 2018.

Fiction and simulacrum appear at the core of Farhad Moshiri’s multi-faceted practice of painting and installation. It most probably all started in Shiraz, where Moshiri grew up, a city nestled in the southern desert of Iran and famously the birthplace of the great Persian poets Hafez and Saadi. Moshiri’s father owned a few cinemas in Shiraz, and the artist spent his childhood watching classic American films, horror movies or spaghetti westerns, all dubbed in Farsi. From Dracula to Laurel and Hardy, from Charlie Chaplin to John Wayne, mythical figures of the Americana accompanied his Iranian upbringing. Years later, in the aftermath of the Iranian Revolution, Moshiri and his family relocated to the suburbs of Los Angeles, a place where fiction and representation does in fact precede reality. During his formative years studying at CalArts in the 1980s, he encountered conceptualists John Mandel and John Baldessari, a pioneer of accumulation and use of language, and electronic musician and synthetizer inventor John Buchla. The art produced in the United States in the next decade would bring Pop, minimalism and conceptual practices together with American consumerism, and artists such as Jeff Koons or Haim Steinbach would express these influences in their work. By 1991, Farhad Moshiri had moved back to Iran, and began developing a practice evoking Iran’s traditions and isolationism, while simultaneously addressing the powerful presence and attraction of Western pop culture and this of a globalized consumerism.

On the one hand, Farhad Moshiri expresses, throughout his work, a visual fascination for a Pop imagery inherited from movies and popular culture— cartoons, films, ads, children’s books, cowboys and Indians—, and frequently utilizes sentences taken from classical poetry and pop songs. On the other hand, he seems to merge this influence with a technical appropriation of traditional Iranian modus operandi such as Persian carpets, tapestries with traditional motifs taken from Persian miniatures or embroidery of traditional adjad calligraphy, an ancient Arabic clerical code associating letters and numbers. Undeniably Moshiri plays with a range of clichés and stereotypes taken from both cultures. In witty and sometimes cruel détournements, he employs lyrics from American songs, famous slogans or sentences taken from Iranian popular love songs and soap operas. In this sense, Moshiri seems to take over in order to better deconstruct the clichés both inherent to Hollywood and to what Iranians have coined as Gol-o-Bolbol—literally “flower and the nightingale”—i.e. two commonplaces of Iranian literature and visual culture, and echoing a stereotyped and saccharine Persian imagery.

Farhad Moshiri’s latest series of works, presented at Perrotin New York and entitled Snow Forest (2017), are inspired by photographs of snow trees taken during the winter in Iran. Hand-embroidered with pearls beads, these new compositions seem to refer to calligraphy, as the black branches traverse the canvas like a quill would mark the paper. This writing form is an abstract one though, and the viewer may feel lost in its absence of meaning, looking at a surrounding ensemble of branches and snow in the middle of the forest. It also evokes a melancholic and abstract visual realm, suggesting a rather minimalist sense of poetry than the shiny and shimmering imagery that usually dominates his practice. These black and white canvases also bring to mind Abbas Kiarostami’s series of winter photographs, “Snow Series”, which the renowned Iranian filmmaker started to produce right after the Iranian Revolution, as he wasn’t allowed to make films in his native country anymore. Similarly, Farhad Moshiri photographed winter landscapes in Iran years ago, recently found them in old boxes and decided to use, for the first time, the photographic medium as the point of departure of a new series. In addition, this body of works seems to express a meditative approach to the essence of things and to nature, as well as a bucolic reflexion on their existence, inducing the presence of an inaccessible place or a lost paradise where the artist might not be able to return.

By evoking images and cultural artifacts that suggest both American and Iranian cultures rather than pointing out the cultural dichotomy between East and West or relating the experience of an individual lost between two worlds, Farhad Moshiri’s practice seems, on the contrary, to convey a certain idea of porosity of cultures, at a moment in history where the weight of borders has become more and more significant. In times of restriction of access to specific population through the institution of a Muslim ban including Iran in the United States, Farhad Moshiri’s work appears as a necessary proof that cultural borders remain open while physical ones may close. He interrogates our definition of cultural identity, and evokes the construction of a memoryscape, or a plural memory made of exile and immigration, of aesthetic exchanges and visual acculturation.