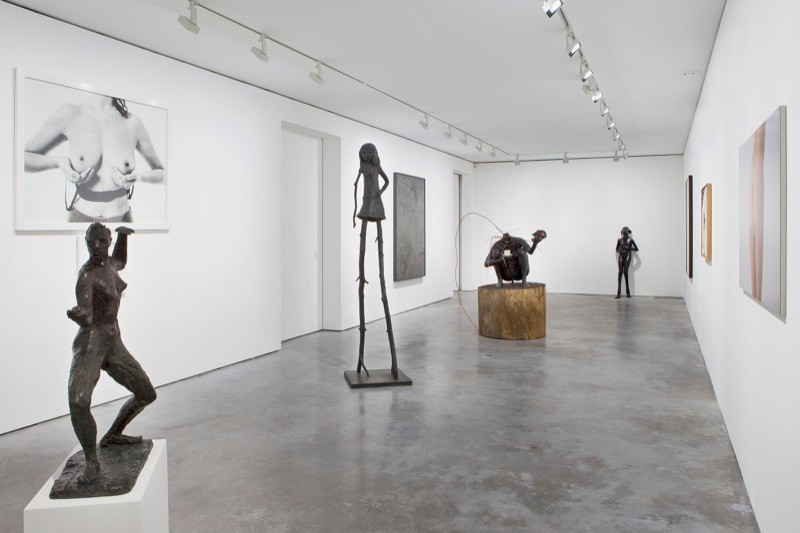 When Emmanuel Perrotin met Pharrell Williams in Miami during 2007 and asked him to come up with his very first design object, he never imagined that this musical genius, super-producer and fashiondesigner would carry the adventure with a sculpture created with Takashi Murakami1. To mark the release of the album G I R L, Pharrell Williams and Emmanuel Perrotin continue their artistic collaboration seven years later with an exhibition curated especially for Galerie Perrotin in Paris.

“G I R L” is a contemporary art exhibition, which brings together48 artworks – including 12 specially produced works. The exhibition will be presented in Galerie Perrotin’s new space, the Salle de Bal, a former ballroom at the Hôtel du Grand Veneur, a 17th century Hôtel Particulier in the Marais area of Paris. This selection of artists close to the gallery and the musician form a kind of operatic opus, where muses have come together to pay tribute to femininity through the vision of 37 artists / including 18 women.

The 48 artworks presented in this exhibition, coordinated by Ashok Adicéam, Senior Advisor at Galerie Perrotin, aim to celebratewomen who are above all free, liberated by artists and their boundless,unfettered imagination!

“I have always mixed artworks into my music, clothing, jewelry and my entire way of life. They stimulate creativity, mutual curiosity, and simply happiness!” Pharrell Willliams declares. The international pop icon applies this credo of blending artistic mediums every time he works with his artist friends, like DAFT PUNK, Daniel Arsham, KAWS or Takashi Murakami. “I’m like a student when I’m with visual artists, I love to learn from them. Artworks teach you how to live and think differently”.

“After the launch party for my new gallery in New York in late 2013, Pharrell took a few of us to listen to the first 5 tracks of his upcoming album G I R L. The songs put us in such a good mood that we danced to all of them. At this moment, we realized that this tribute to women was going to be a worldwide success and would represent a shift in his career. Pharrell made us feel like we were part of it. This project at the gallery in Paris is a natural continuation of this adventure,” says Emmanuel Perrotin.

An Ode to Otherness
If “sitting in someone else’s position to understand their experience of love” was Pharell William’s inspiration behind the “Perspective” (2008) chair2 – with two male and two female legs that extend the seat, the works selected for the exhibition “G I R L” mix images of women and of love, viewed from a variety of angles. These perspectives also bear witness to the creative tension between men and women, such as “Rest Energy with Ulay” (1980), a performance by Marina Abramovic and Ulay, who face each other while flexing a bow and arrow! Since “being a woman is still being the Other3”, each selected artwork is an invitation to discover the “Otherness” of each artist and woman represented, such as this oil painting on a wood panel by Laurent Grasso, “Studies into the past - Single Cover of “Lost Queen” by Pharrell Williams” (2014), created for the musician, with Pharrell Williams as Napoleon and Love as an Ancient Egyptian Goddess.

Among other works created specially for the exhibition, we discover the collaborations and natural magnetism that stems from the loyal friendship between Pharrell Williams and Emmanuel Perrotin through their numerous studio visits, openings and brainstorming parties! These include a large tondo by Takashi Murakami, a tribute to Pharrell Williams and his wife in her wedding gown, a sculpture by Daniel Arsham made of broken glass, a laser portrait of Marilyn Monroe by Gregor Hildebrandt, a new work on canvas by KAWS, whose work Pharrell Williams collects and who is creating the bottle for his upcoming fragrance G I R L, as well as special projects with Guerrilla Girls, Rob Pruitt, Aya Takano, Guy Limone and JR, for whom Pharrell Williams created the soundtrack of his latest film, as well as Mr., who is creating the next music video for Pharrell...