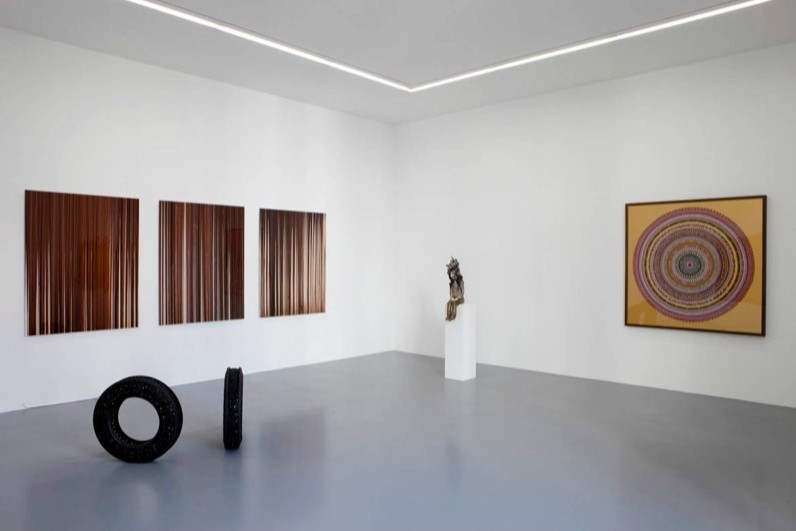 From March 10 to May 5 Galerie Perrotin is presenting an exhibition of new works by
the gallery artists, among whom: Sophie Calle, Johan Creten, Wim Delvoye, Elmgreen &
Dragset, Lionel Estève, Daniel Firman, Bernard Frize, Gelitin, Bharti Kher, Kolkoz, Klara Kristalova, Guy Limone, Takashi Murakami, Jean-Michel Othoniel, Paola Pivi, Claude Rutault, Michael Sailstorfer and Xavier Veilhan.
Sophie Calle, for whom Galerie Perrotin is organising a solo exhibition «Pour la dernière et la première fois» from September 8 to November 3, 2012, is showing « Où et Quand ? Nulle part » for the first time, the third part of a trilogy comprised of « Où et Quand ? Berck », 2004/2008 and « Où et Quand ? Lourdes », 2005/2008, tales of the artist’s voyages suggested by the seer Maud Kristen, in response to the Sophie Calle’s wish to predict her future so that she could meet it, and catch up to it. Some major exhibitions will be soon devoted to Sophie Calle: «Take Care of Yourself» at Espoo Museum of Modern Art in Helsinki (March 2 - June 10, 2012) ; «Historias de pared» at Museo de Arte Moderno de Medellin, Colombia (March 21 - June 3, 2012) and at the Banco de Republica in Bogota (June 15 - September 22, 2012); «Rachel, Monique», at Festival d’Avignon, Cloître des Célestins, France (July 7 - 28, 2012) and «Pour la dernière et la première fois», at Rencontres Arles, Chapelle Saint-Martin du
Méjan, France (July 2 - September 16, 2012).
Johan Creten is presenting six new sculptures in enameled stoneware. He favours the ancestral technique of ceramics to create an enigmatic universe. His brutal and seductive art, like the vanities, allegorically reveals human sentiments through the worlds of vegetables and animals. The Dhondt-Dhaenens Museum in Deurle (Belgium) is organising a solo show for the artist from October 21 to January 31, 2013.
Wim Delvoye, to whom two important personal exhibitions are very soon being dedicated, (one at Galerie Perrotin from My 12 to June 16, 2012 and another at the Musée du Louvre from May 31 to September 17) is exhibiting two hand-sculpted car tires («Untitled », 2011). These everyday objects engraved with geometric and floral motifs are turned away from their usual function through an astonishing metamorphosis.
Elmgreen & Dragset’s new sculptural work «Unfinished Symphony (Ich bin doch kein Mahler)» addresses the question of the unfinished - the beauty of the imperfection that can be found in something not yet completed - within the process of creating. The monumental and sculptural rough draft of the composer Gustave Mahler’s head is placed on a grand piano, which is not yet varnished with the normal glossy black lacquer, but rather still appears in its original raw wood. This stripped-down version of a traditional bourgeois interior references Mahler’s 10th Symphony, which remained unfinished after the composer’s premature death at the age of 50. A four meter high bronze sculpture depicting a young boy on his rocking horse and on view until 2013 has been produced for The Fourth Plinth Commission 2012 in Trafalgar Square in London.

Daniel Firman is presenting a new work entitled « Nasutamanus ». It is being announced as the second part of a trilogy that is a work in progress following « Würsa à 18 000 km de la terre », 2006/2008. This sculpture, created with techniques used in taxidermy, proposes an aberrant vision of an elephant floating in a void with its trunk against the wall as the only point of contact.
Just like the elephant Würsa, « Nasutamanus » produces gravitational vertigo, but here no scientific calculation is put into play. Tensed, flexing and light, the animal does not seem to be concerned by our physical space, but seems to draw us by its prehensile capacity for the world. This work will be exhibited from May 4 to September 2 as part of « The Circus as a Parallel Universe » at the Kunsthalle Wien. The Museé d’art contemporain de Lyon is dedicating a personal exhibition to Daniel Firman in 2013.
Bharti Kher is presenting a sculpture entitled « The collector of small trophies », 2011 and a new Bindi painting, «Microcosm», 2011, that are both symbolic of her ongoing practice of works that employ the bindi. By creating geometric and organic shapes, the artist achieves great visual force and addresses complex themes of the self and the conceptual underpinnings of the third eye. The sculpture is comprised of a display case set on a block of granite that contains a stuffed crow and ceramic teacups. The ceramic elements are an evocation of femininity and domestic dominance as well as a reference to the history of the tea ceremony. The installation represents a hybrid universe suspended between modernity and tradition. Bharti Kher will be participating in two exhibitions devoted to contemporary Indian art, «India Today» at the Arken Museum of Modern Art in Copenhagen (from August 18, 2012 to January 13, 2013) and «Indian Highway VI» at the UCCA Art Centre in Beijing (from June 23 to August 26, 2012). A solo show of the artist will be held from September 12 to November 11, 2012 at the Parasol Unit Foundation for Contemporary Art in London.
In his works, Jean-Michel Othoniel uses glass as a reversible and malleable material. His enigmatic sculptures - in the form of jewellery, architectures and installations – show his fascination for phenomenons such as metamorphosis, sublimation and transformation. On this occasion he exhibits « Le Collier blanc », 2012 and « Larmes de verre », 2012, two works in Murano glass.
First launched at the Centre Pompidou in Paris, the retrospective « My Way » has been on view at the Leeum Samsung Museum of Art/Plateau and then at the Hara Museum, Tokyo (until March 11, 2012) and soon at the Macao Museum of Art (from April 24 to June 17, 2012), at the Brooklyn Museum, New York (from August 17 to December 2, 2012). L&M Arts, NY will dedicate a solo show to the artist from September 6.
Claude Rutault is presenting three « définitions / méthodes ». The first (« définition / méthode. visioguide », 2007) is composed of a certain number of canvases which are at the disposition of the visitors. Visitors can borrow a little canvas for the duration of their visit. On the back of the works is written: «Look at the painting, don’t listen to what people say ». Other two works will be exhibited: «definition/method 295. the challenge of painting», 1973-2012 and «definition-method 475: absent legend», 1987. Claude Rutault, who has played a major role in French art since the 1970’s, is currently participating in two group shows, « Décor et installations » at the Galerie des Gobelins in Paris (until April 15, 2012) and « L’œuvre et ses archives : Buren, Merz, Rutault » at the CAPC – Musée d’art contemporain de Bordeaux, France (until December 9, 2012).
Michael Sailstorfer has placed a steering wheel on the wall of the gallery, « Lenker (2) », 2012, that is driven by a phantom driver, like a kinetic work. The artist decontextualises manufactured products, ascribing new qualities to them. Through this displacement, he creates poetic, incongruous devices and fabricates solitary machines that at times lead to the disappearance of the object. The Frac in Haute-Normandy is organising his first solo show in a French institution from April 21 to July 15. The Berlinische Galerie in Berlin is devoting a personal exhibition to Sailstorfer, who won the Vattenfall Contemporary prize in 2012, from April 26 to October 8, 2012.
The exhibition will also comprise a new work by Lionel Estève, two paintings by Bernard Frize, a work by Gelitin, an installation by Guy Limone, a new photographic series by Kolkoz, a sculpture by Klara Kristalova, a new painting by Takashi Murakami, a triptych by Paola Pivi and a film by Xavier Veilhan.
www.galerieperrotin.com