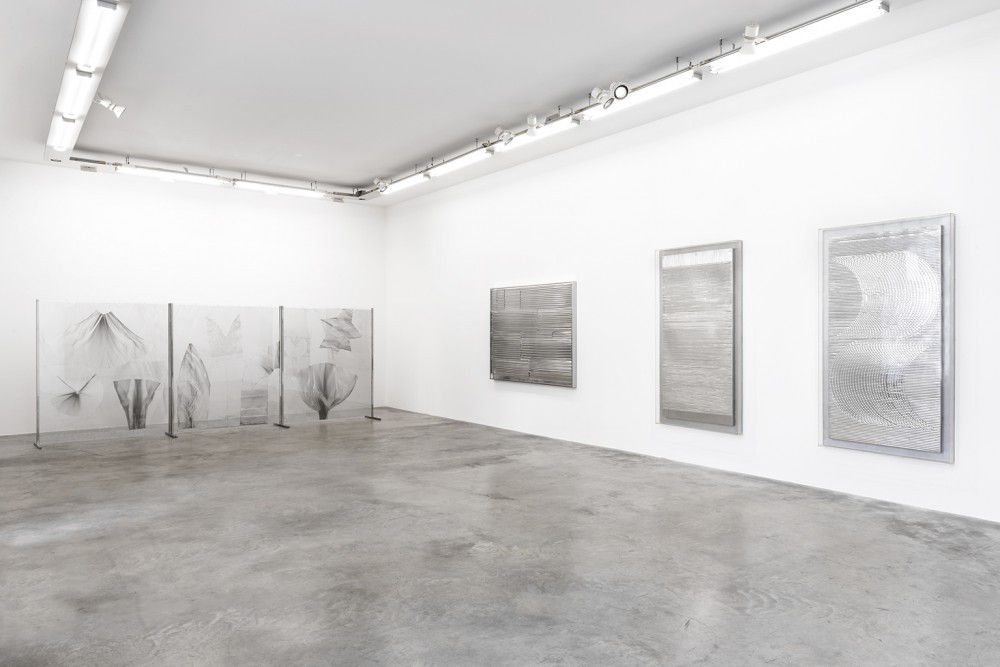 In 1973, the Musée d’Art moderne de la Ville de Paris presented an important retrospective of Heinz Mack’s work. Yet during the ensuing decades, as the artist’s career took on international scope, his presence diminished on the French artistic scene. The current exhibition thus proposes reviving this essential reformer from the history of abstract art. With enthusiastic support from the artist as well as major lenders and institutions, I have selected for this exhibition a substantial group of more than seventy works, including some very old ones that have never been shown in public. The presentation will exceptionally take place in all of the spaces of the Galerie Perrotin in Paris, and will link together works of various formats, natures, and periods in order to highlight the main lines, if not the “whole spectrum,” of a broad career.
From one period to another, Mack’s esthetic search has been a constant exploration—both systematic and sensual—of the lumino-chromatic spectrum and its perceptive thresholds. This immaterial goal took on a philosophical dimension for the artist, one that was paradoxically based on highly material means, and that used the raw simplicity of natural or manufactured materials such as paint, metal, wood, stone, glass, plexiglass, or sand. The variability of the manual production, both controlled and random, as well as this primitivist reduction, make Mack the source of an exceptional phenomenological unfolding. The viewer is prompted to feel the tangible experience of vision, and to consider time and space as entirely separate mediums.

The very first works characteristic of the artist appeared around 1950, in the context of the Arts Academy of Düsseldorf, and then during his philosophy studies at the local university. From the beginning the artist favored a willingly abstract and nonfigurative language, while being disappointed in most of the recent developments in that trend, which he deemed academic and too indebted to traditional composition and imagery. On the other hand, the historic avant-garde of Constructivism, Futurism or De Stijl drew his attention. Around 1953-54, he quickly conceived paintings, reliefs, and sculptures according to a radical logic, one that is still unfolding today in his daily practice, at his studios in Mönchengladbach and Ibiza. This esthetic principle includes his numerous voyages to the Sahara, where beginning in 1962 his productions and actions prefigured North American Land Art. The years between 1957- 1966 were an equally crucial period: with Otto Piene and later Günther Uecker (who joined them in 1962), Mack was the founder and central figure of ZERO, a multifaceted artistic entity and international hub of the kinetic renewal of abstraction, which had Yves Klein and Jesús Rafael Soto as members, to name just a few. Numerous institutions, with the assistance of the ZERO Foundation in Düsseldorf, have recently endeavored to present this complex movement, from the Guggenheim in New York to the Stedelijk in Amsterdam, along with the Martin-Gropius-Bau in Berlin, or the Galeries Nationales du Grand Palais in Paris with the exhibition “DYNAMO”—whose title I had suggested in reference to the repeated use of the term by Mack himself during this historical period. The 1970s and 1980s fall within a single esthetic singularity, in which a number of Mack’s sculptures—including numerous steles and other obelisks that were willingly off scale—engaged in a rich dialogue with architecture and urban space, primarily throughout all of Germany.

On his business card, Mack presents himself as a “sculptor and painter”. The order in which these mentions is important, as it gives precedence to the modulation of matter in space over the creation of images on a painting’s surface. In other words, even the canvases stretched over frames—paintings— from the ZERO period are covered in a material whose abundant impasto pushes them toward the relief, that intermediary domain of art history somewhere between painting and sculpture, and whose elements are significantly raised from the surface on which they are fixed. Their appearance remains ambiguous, even paradoxical, making it difficult to fix them mentally or photographically. For Mack’s work exists only in a double movement of appearance and disappearance. The unstable material is constantly eroded by darkness or light. We have a paradox here—one that is inseparable from the history of Kinetic art and Perceptual art, of which Mack was a central figure—between the tangible simplicity of the material fact, and the insolvable mystery of its effects.

On the occasion of the exhibition Galerie Perrotin and Editions Dilecta publish a monograph including a text by Matthieu Poirier.

Heinz Mack was born in 1931 in Lollar (Germany). He lives and works in Mönchengladbach (nearby Düsseldorf), Germany and Ibiza, Spain
www.galerieperrotin.com