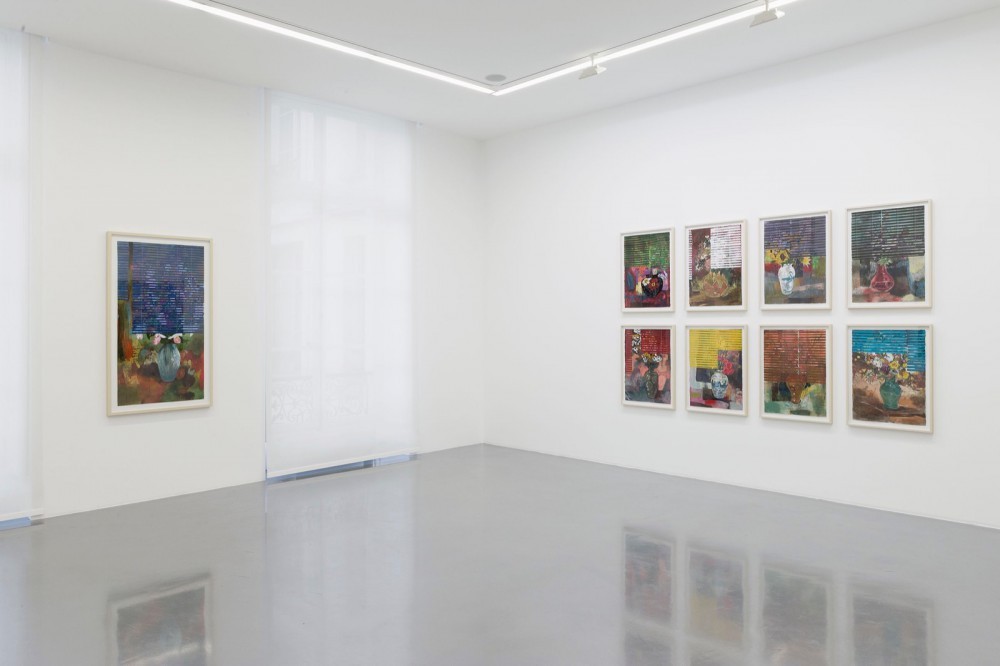 In Joris-Karl Huysmans’s 1884 novel and symbolist masterwork À rebours (Against Nature), the antihero Jean des Esseintes, who embodies the decadent spirit par excellence in the figure of a reclusive esthete, shivers in awe while listening to Gustave Flaubert’s prose: ‘I seek new perfumes, larger blossoms, pleasures untasted.’ [1] This passage or whimsical urge is the perfect prelude to American artist Hernan Bas’s third solo exhibition at Galerie Perrotin, Paris, which presents both literally and figuratively a “fruity and flowery” ensemble of new works on linen and paper.

Born in 1978, Hernan Bas has developed since the turn of the 2000s an iconography, which is deeply influenced by the late 19th century decadent and symbolist – artistic and literary – aesthetics. His practice falls within the figurative and romanesque renewal of painting observed since the course of the 1990s. From landscape to portrait, including genre scene and for the first time with the exhibition “Fruits and Flowers” still life, almost all the categories of classical painting are revisited within a fantasized world of instinctive as much as ambiguous sensuality.

More often than not, Hernan Bas twists the titles and subjects of his works into puns and homosexual innuendos. In some of the paintings exhibited at Galerie Perrotin – such as “Odd Fruit”, an orange seller sitting in his overflowing stall –, the term “fruit” humorously refers to both the characters and the actual fruits represented with them in bucolic sceneries, many of which revolve around leisures related to the harvest season. Among them notably, several carnival games that are typically American and particularly rustic have caught the artist’s interest. For instance, “The Unlikely Winner” represents a young man devouring pastries at a pie eating contest, while “Bobbing” depicts a group of six adolescents playfully bobbing for apples, or the weird «The Sunday Snail race». Finally, “William Won’t tell (pinky swear)” revisits and debauches the myth of William Tell in a woodland scene worthy of Paul Cézanne, as well as “(Shh) William Won’t Tell”, which presents the sole profile of a blushing ephebe, the forefinger of another shutting him up, as if he was punished and waiting for an arrow to maybe pierce the apple he is crowned with...

In Hernan Bas’s figurative paintings, the highly detailed treatment of the protagonists and above all the luxuriance or exuberance of the landscape enveloping them, which by the way isn’t without evoking the romantic oeuvre of Arnold Böcklin or that of Caspar David Friedrich, strongly contrast with the rather gestural and quite hasty sketch of certain parts of his backgrounds, as for example in “The rare orchid collector (on expedition). Captured within instants of pure flânerie, his characters always appear as if suspended in time and limbo, between adolescence and adulthood, nature and abstraction. Each scene offers itself to us like a dream and symbolism completely takes over naturalism. ‘“Fruits and Flowers” is the result of an investigation into how to make rural American pastimes into classical paintings. I wanted to paint these lowbrow events in a manner Bonnard would have approached them, to make them in my own vocabulary more “fruity”, as though they were being played not by a Midwestern American but a contemporary dandy,’ he said. Little to nothing seems to occur in Hernan Bas’s expressionist and dilettante visions, while his vibrant palette, which is almost fauvist, is certainly reminiscent of that of Pierre Bonnard, a leading member of the late 19th century group Les Nabis, whose work from memory made him as well succeed in conveying an oneiric, unreal, quality to his symbolist paintings, inspired in particular by Japanese engraving, whether they were his intimist portraits, his lively landscapes or his still lifes.

Speaking of which, other examples of Hernan Bas’s deliberate use of figurative double meanings regarding this time floral decadence include “Ripe”, which represents a weary young man bending under the weight of a wicker basket that is filled with sunflowers in sweltering heat, as well as “Wilting”, which describes as much the languor one can read on the protagonist’s face and overall posture as the state of the flowers fading out in a vase in front of him. The association of these carnal and floral forlorn figures immediately brings to mind precursor of literary Symbolism Charles Baudelaire’s description of melancholy (“spleen”) in his 1857 collection of poems Les Fleurs du mal (The Flowers of Evil). Finally, for the first time Hernan Bas presents at Galerie Perrotin still lifes, “Private Bouquets”, a series of floral compositions. Arranged within refined vases, the bunchesn of flowers are depicted partly concealed behind the slits of Venetian blinds, which as a result operates with a slightly voyeuristic discretion the metaphoric transfer of the sensual charge that was implied in the artist’s portraits. From these precious petals that elude our gaze to the gloomy “fruits” and faded flowers previously described, Hernan Bas invokes here the very genre of vanitas and the transitory nature of life between ephemeral beauty and androgynous fragility. Violaine Boutet de Monvel