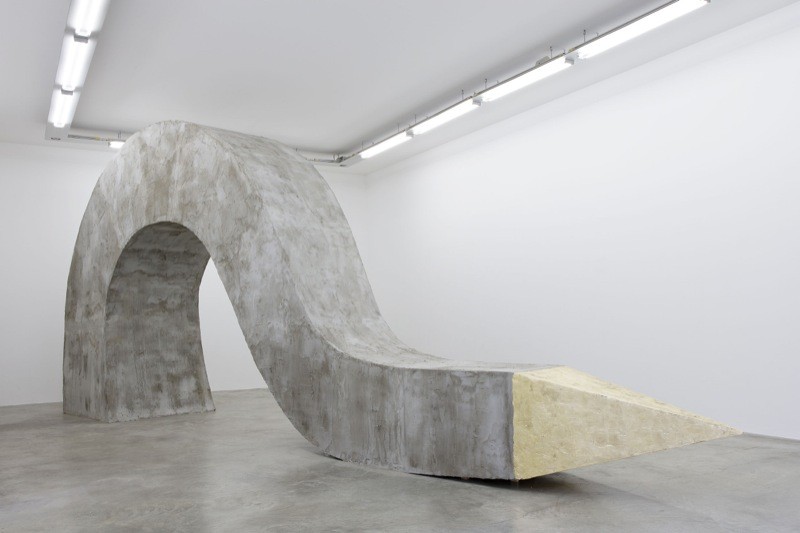 The Commune of Paris considers that the imperial column in the Place Vendôme is a monument to barbarism, a symbol of brute force and false glory, an affirmation of militarism, a negation of international rights, a permanent insult to both victors and vanquished and a menace to one of the three great principles of the French republic—fraternity, decrees (single article): the column in the Place Vendôme will be demolished.

If Ivan Argote makes obelisks go limp, takes the roar out of imperial lions as they play ball (reviving their instincts as funny cats) or warms up Spanish statues with Peruvian ponchos made in China, it is because in these days when symbols of domination have become roundabout decorations, the monument-fellers need to change their methods. Argote travels the world looking for vestigial signs of fallen power, studying the indirect manifestations of control, observing the conventions that gain acceptance for one vision of history as the official version. A paranoid semiotician in a bucket hat, we picture him going from Greco-Roman sites to western megacities or the Colombian plains and finding just too many coincidences for them not to indicate an age-old plot. Wherever he goes he is struck by these absurdities inscribed in the scenery and tolerated out of simple amnesia or habit, like that coal train forever passing through the middle of a village in South America, quite oblivious to the global energy business.
The dialogue has already been written: one day, everything will change, it will hit you like a ton of bricks, but don’t worry, “we have new methods.” Argote’s poetry speaks for a generation to whom the disillusionment of its elders has bequeathed only irony and nostalgia as means of subversion. So be it: he softens monuments, makes allegories ridiculous, smokes up museum display cases, subverts prompters, breaks military codes in order to make them philosophise.

From fictive insurrection to demos without damage, his puerile mood is never discouraged, Argote takes it on himself to change the world. He has already recreated the big bang with a gang of mates equipped with torches. But beware this dreamer’s temperament: his naivety is false, his dilettantism probably a revolutionary strategy. His romanticism, without a doubt, is transgressive.
Yes, beware, it could happen soon, and all this may just be the trailer. For indeed, the systematic shaking-up of structures of legitimisation cannot spare the context of art. Indeed, it is Argote’s primary target: as we may recall, he came to notice when he graffitied two Mondrian at the Musée national d’art moderne/Centre Pompidou in Paris. This artist who mistrusts stable things is thus using his solo show at the gallery to sketch out the directions for work on his next film: the pieces shown here can be seen as excerpts preceding its final realization. This is also what this new method indicates, in which the work appears belatedly, by a process of tacking, ebb and flow, and in which the moment of enunciation is one with that of elaboration, lifting the veil (before the smoke bombs go off) on the prosaic parts of inspiration, abandoned attempts and existential doubts.