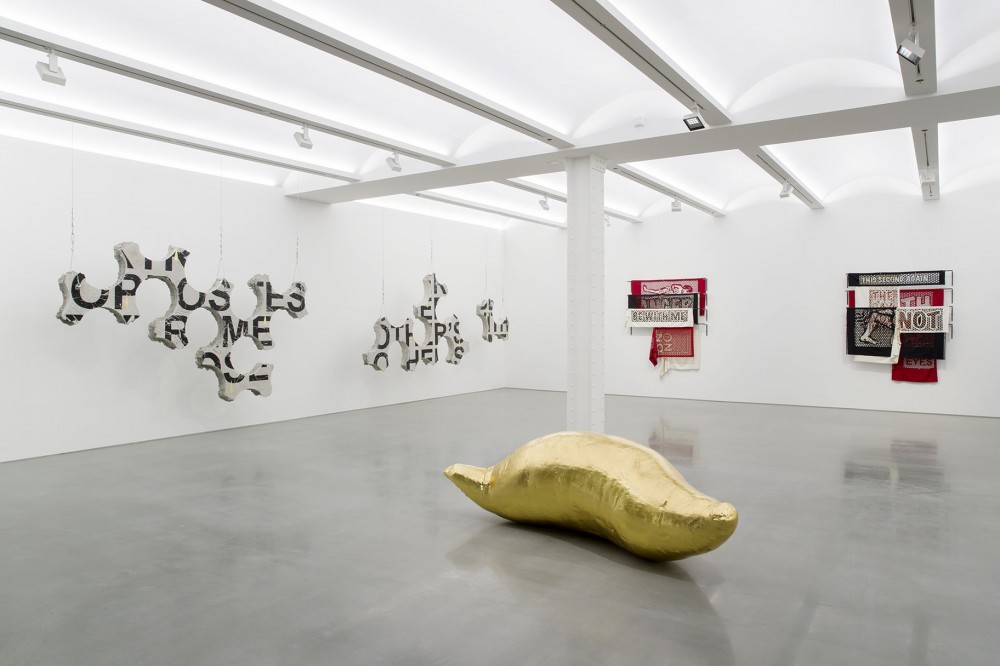 When I was a kid, someone told me that a man dug a hole so deep that he stepped out of it on the other side of the world. Standing myself on firm ground, I was wondering why this man, in fact, did not fall out of the earth exiting it upside down. In his new film “As Far As We Could Get” that contains documentary and fictional elements Iván Argote digs an imaginary channel from Indonesia to Colombia, or from the municipality of Palembang to a town called Neiva. The two cities are exact antipodes (a rare coincidence that only six more cities share worldwide). In both locations, the artist rented large billboards to announce simultaneously a feature film named “La Venganza Del Amor” (The revenge of love). As if in a novel by Jorge Luis Borges the title of his gallery show in New York is announced through a pyramid of interrelated information—stemming from a billboard announcing a fictional film, documented by the artist’s camera, we read the title of the art exhibition that we are currently visiting.

In contrast to my childhood man, Iván Argote boarded a plane to fly from South American to Asia. In either continent, and with the same directives he met locals on a level playing field. His main focus are young adults that are coincidentally born on the day the Berlin wall came down. While enriching a once-in-a-century event with personal biographies, Argote investigates feelings (another sheer unlimited profundity) as the tissue that takes influence on both, history and memory

Switching back and forth between two locations the camera records more similarities than differences, brought to the point by bouncing basketballs always obeying gravity, thus drawing an imaginary line to the center of the world. The balls read as agents of globalization mediating between continents but also between the world of leisure, sports marketing (the branding of basketball players began in the USA in the 1980s), Neo-Liberalism, and Contemporary art (think Koons).

The film projection of Iván Argote is interrupted at frequent intervals to illuminate the exhibition space and notably a series of concrete wall hung sculptures, as well as a huge solitary gold nugget (a Sweet potato in disguise). The vegetable supposedly crossed seas as early as 700 AD as it sailed from the mouth of the Orinoco River in Venezuela to Polynesia to be cultivated and eaten ever since, stating eventually an example of a highly successful cultural “incorporation”.

Multiple layers of punctuated sheets are mounted in front of each other creating a palimpsest pervious to air. The imprinted slogans, borrowed from political pamphlets, form a concerted arrangement of voices. The colorful display acts as a filter. Some events will pass the barrier without leaving traces; others will be eternalized. The artist, who often speaks of history as “texture”, creates allegorical images of the past and thereby deconstructs the present. The punched-out holes can be read as a loss of memory, or as a breeze of fresh air.

“La Venganza Del Amor” is also Iván Argote’s response to the current political climate in the US, triggering a lot of hostility towards foreigners and especially Spanish speaking immigrants. The title is a reference to both politics and cultural stereotypes (it could also be the title of a telenovela) with the assertion that love will always win.
Gianni Jetzer, March 2017

BIOGRAPHY
Born in Bogotá, Colombia, in 1983, Iván Argote settled in Paris in 2006. Argote creates videos, photographs, sculpture, public interventions and performances, as a way to explore our inextricable links to history, tradition, art, politics and power. Argote investigates the city as a place of transformation and potentiality, traveling the world in search of vestigial signs of fallen power, studying the indirect manifestations of control, and observing the conventions that gain acceptance in order for one vision of history to become the official version. Public monuments and sculpture are also recurring themes in the artist’s work. Through his personal narratives, and their connections to history, ideology, and consumerism, Iván Argote questions a Western perspective of History. Emmanuel Perrotin met Iván Argote in 2008 while the artist was a student at Paris Fine Arts School. Perrotin has represented Argote since 2009 and “La Venganza del Amor” marks his first solo show in New York.

ván Argote won the CIFO Cisneros Fontanals Foundation Prize in 2015, the Audi talents Award in 2013, and the Sam Art Projects Prize in 2011.

He was selected by 18th Street Art Center, Los Angeles for a Residency in 2013
www.perrotin.com