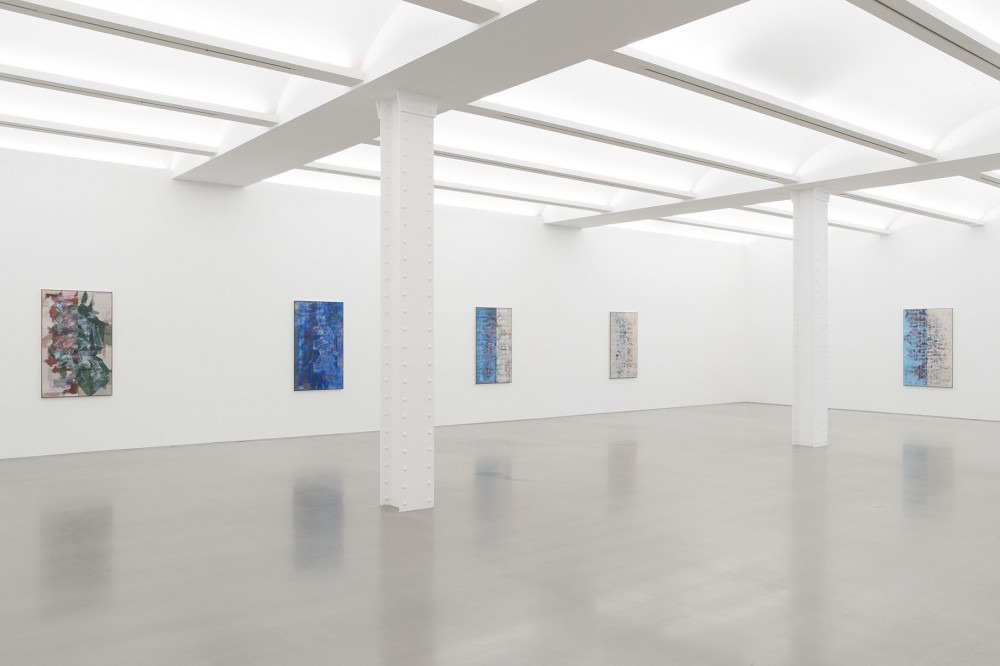 The general narrative of painting goes something like this: the painter builds material knowledge upward from support to ground, to figure. The wet paint is manipulated until it can be manipulated no further: the composition dries, thereby is fixed and assigned as finished. This is the progression of the deductive, a logical mode and truth-generating system that seeks to refine knowledge to the point of fixed conclusion by way of a sequence of refining steps.

Why should this be the base from which we plot an introduction to the paintings of John Henderson? For if the general narrative of painting is one of building, of progression, of declaration and assertion, Henderson’s work insists on alternate—abductive—logics, one wherein that which is built anticipates being unbuilt and any declaration is coexistent with its amendment. Henderson’s works are assembled through a conceptual framework of best-guesses, suppositions, estimations, and—most importantly—reversals. Eventually, Henderson situates his work in the realm of the “perhaps.”

What follows is the development narrative for the works in this exhibition. Henderson applies multiple layers of paint upon the support, some flat and others with the distinctive texture of a nap roller. At this stage the textures of these layers are indescribable to the eye; some of these applications cover the entire surface of the painting while others are positioned in particular quadrants or hemispheres. These applications are applied without obvious method or system, which is also to say that they are freed from operating under any unified aesthetic aim. Each layer individually, and all layers collectively, are not in service of an overt, successive, straight composition, instead, their primary function is to cover that which has been placed prior. At this stage, the interaction between applications is totalizing: all encompassing and indiscriminate—each are an effacement. Expectations of presence and absence, doing and undoing are beginning to be overturned.

At this stage, Henderson paints onto the canvas with a brush, laying down vibrant, gestural marks that are responsive to the visible ground and other figured accumulations on the surface. Under normal circumstances, which is to say within the general narratives (wherein one moves general to specific), it is at this stage that another artist might stop so as to find, or announce, completion. The gesture has been placed upon the field, the figure is situated upon the ground, the fine is expressed atop the flat, the specific is atop the general.

Henderson continues forward. Atop what might elsewhere be seen as a finished work, additional layers of paint are applied to cover that which already exists. The gestural, abstract brushstrokes are overlaid with new applications of paint of unvarying color and unwavering coverage: the figure is obscured by a new ground. The evidence of the artist—his mark—is sandwiched between multiple layers of uniformity and regularity. The painting dries, and its progression of layers cure and combine into one another.

Once dry, the work is at its midway point. Henderson begins to delicately remove layers of the painting, finely abrading the surface to reveal previously-laid layers, indiscriminately unearthing, in part, the previous. Colors and textures have interacted in unexpected ways: given the process of moving backwards, the material reveals itself in ways never before experienced in the sequence of application. The painting becomes a subject to itself: the entirety of the work becomes an underpainting, the final visual effect is produced—or maintained—despite its own removal.

The material sum of the painting fully exists—the trajectory of the work now returns inwards on to itself in search of conclusion.

With material progression turned on its head, so too is the trajectory of knowledge. Henderson’s return inward is archeological: less that it might divulge details of the past, but instead serve as a mirror to the inquiries of the present. In a process of knowing that combines his touch and eye, Henderson continues forward to produce a partial unearthing of that which had been covered over. His moving back beneath the surface of the painting is not a total reversal or an editing, but a secondary moving-forward that emphasizes the methods inverse and negative. The resulting work couples the predicable and its opposite, making and knowing, all the while eschewing perspective and foresight.

Henderson’s paintings oppose a one-directionality and challenge the vocabulary most frequently called upon to recognize subsurface meaning. In as much as these works emphasize pentimenti, so too do they build upon its reverse; the palimpsest is achieved only in its opposite; sous rature is reversed. In these artworks, any continued additive act (any element that which follows, any process to-come) is in tandem with that which already exists previously: neither are privileged or permanent, no two things are clearly understood as one built upon another. The process is indistinguishable from the result, the picture and event are both fugitive. Henderson, himself a model skeptic—one inclined to question or doubt accepted opinions—models alternatives to one-dimensionality, progression, and expectation while allowing his works to underscore and prioritize a process of unknowing.

I was just laying aside a Lausanne paper I’d bought in Zurich when my eye was caught by a report that said the remains of the Bernese alpine guide Johannes Naegeli, missing since 1914, had been released by the Oberaar glacier, seventy-two years later. And so they are ever returning to us, the dead. At times they come back from the ice more than seven decades later and are found at the edge of the moraine, a few polished bones and a pair of hobnailed boots. (Sebald, W.G. and Hulse, M. (trans.) The Emigrants. New York, 1997, p. 23.)