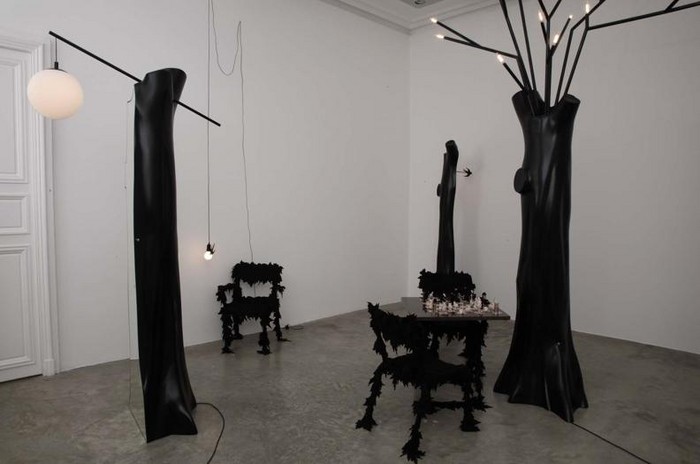 José Lévy first started as a fashion designer. In complete breach with the codes of the time, since he favored the style of the 80s, his collections were inspired by Jacques Tati, Patrick Modiano or Jacques Demy; this unique approach catapulted him into international recognition. For 13 years, he imposed his own world onto the universe of men's fashion world with his own brand José Lévy à Paris. He established himself as an outstanding colourist and an extremely precise taylor. At the same time, he collaborated with other important brands by managing the style of Holland and Holland, Nina Ricci, Cacharel and Emanuel Ungaro. Eager to reach a larger audience, he also joined larger labels like Monoprix, La Redoute or André. Eclectic, accurate, curious and a free creator, José Lévy always illustrated his very personal style by collaborating with numerous artists since the beginning of his career: photographers and visual artists like Jack Pierson, Gotscho and Nan Goldin, Philippe Parreno, Jean-Pierre Khazem or Kolkoz; architect like Xavier Gonzales, or musicians like Jay Jay Johnson , Benjamin Biolay,...).
Since 2007, he has focused on some projects related to the visual and applied art. The Musée des Arts Décoratifs in Paris, located at 107, rue de Rivoli, has just invited him to work on the displays of the windows by exhibiting the collection of porcelain objects drawn for Deshoulières. He is preparing the costumes and furniture for the set of the play "Ordet" directed by Arthur Nauziciel, which will be presented at the upcoming Festival of Avignon. He is also working with the Manufacture de Sèvres and on several other projects as extensive as a pharmacy, bed ensembles, or dinnerware,...
By expressing his own universe, he plays with the notions of acquaintance, privacy, strangeness or theatricality with some irony. He likes to jump into memories, traces of the past, archetypes, roots of the Houses he meets in order to play and to give a respectful, distanced and free look - mixed with hybridizations, mutations, as well as subversive, squeaky and naive mating.
www.galerieperrotin.com