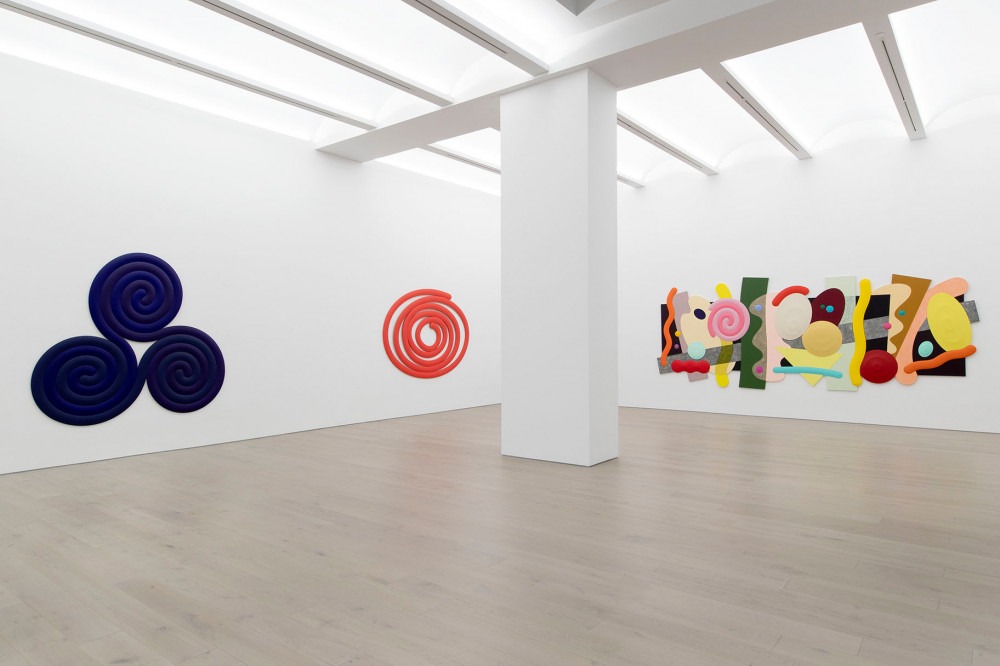 Perrotin presents Josh Sperling’s third exhibition with the gallery, following two 2018 exhibitions in Paris and Seoul. This is the artist’s first solo exhibition in the gallery’s New York space, a kind of homecoming for Sperling, who lives and works in Ithaca, New York.

For Big Time, Sperling has adapted his signature vocabulary of forms to the expansive architecture of Perrotin New York’s third floor gallery. Swirling forms entwine, shapes—regular and organic—eclipse each other in what he calls “composites” or clusters of shaped canvases, as “squiggles” writhe and overtake entire walls.

Sperling’s work has a graphic immediacy, without the flatness that adjective may imply. The paintings, instead, are dimensional. Each begins with a meticulously crafted armature—feats of carpentry—over which canvas is stretched. The effect is not that of obscuring this engineering, but of highlighting, through color when it is later applied, the sculptural skeleton underneath. If Sperling’s unique technique of shaping canvases to create relief from the wall has been classified as painting tending towards sculpture, then here, with scale and architectural space as conditioning factors, the result is painting and sculpture tending towards environment.

Sperling’s work, now recognizable for his particular brand of chromatic geometry, offers pop minimalist confections on a newly expanded scale. Take, for instance, the squiggle wall produced by Sperling: an edge-to-edge composition of snaking forms which takes a 15 by 17 foot wall as its host and support. Increasingly, Sperling’s work addresses the architecture in which it is exhibited and this show is no exception to this new direction for the artist.

Big Time, the work from which the exhibition takes its name, is one of his grandest gestures to date, both in scale and scope, as he enlists the clustering strategy of his “composites” to include all the shapes in his arsenal. It is an amalgam, a compendium of forms where echoes of works past can be found, as well as some indication of what compositional prowess Sperling has in store for future work.