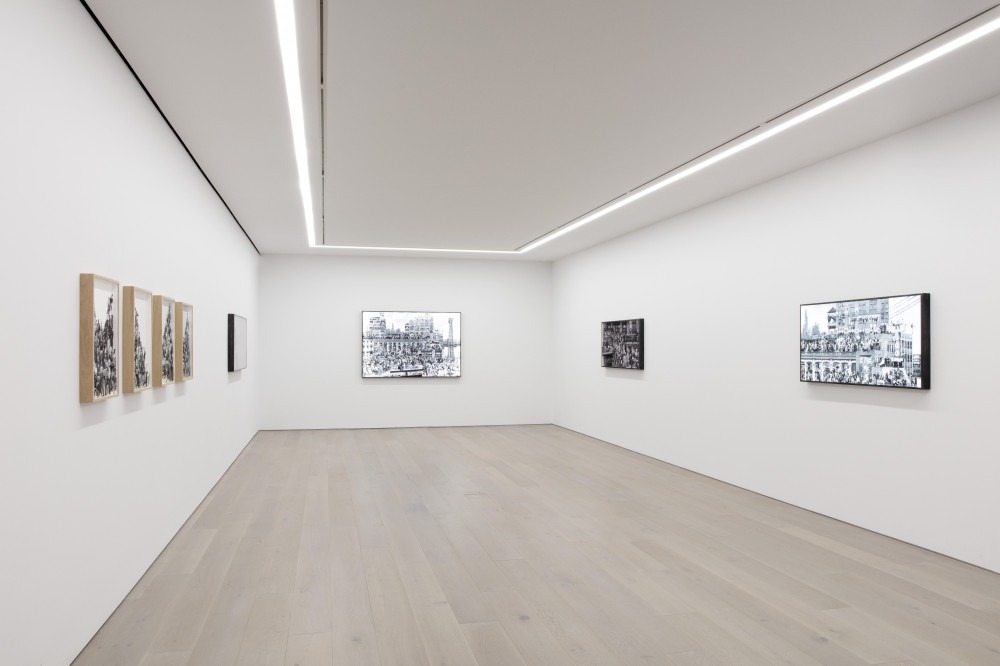 We are pleased to present an exhibition of new work by French artist JR at Perrotin New York. The Chronicles of New York City — Sketches is presented in conversation with JR: Chronicles, the artist’s largest-ever solo museum exhibition to date, opening on October 4, 2019 and running through May 3, 2020 at the Brooklyn Museum in New York. Situated on the second floor of the gallery, Sketches comprises photographic prints, mixed media works, light boxes and a short film, which have all been made in relation to The Chronicles of New York City, an expansive new mural that will be unveiled at the Brooklyn Museum.

JR began the Chronicles series after being inspired by the murals of Diego Rivera. His goal was to make a faithful representation of an entire neighborhood or city as a tribute to the people who live there. Over the last fifteen years, JR has used photography in an expanded public art practice that is socially-engaged, collaborative and global in scope. His work celebrates the power of individual people, often from marginalized or misrepresented populations through the reproduction of their likeness at a monumental scale. In the Chronicles series he continues to make photographs of singular figures but combines hundreds of them into extraordinarily detailed tableaux that tell a simultaneously collective and highly unique story of place and community.

Three years ago, JR launched the inaugural chapter of his Chronicles series, Chronicles of Clichy-Montfermeil. For the project’s first iteration, JR and his team spent weeks in Les Bosquets, a housing project located in the Clichy-Montfermeil suburb of Paris. Over 750 people were photographed to make the final image — a 120-foot-long mural that, person by person, creates a multiplex portrait of Les Bosquets, unveiled at Palais de Tokyo in April 2017. The next work in the series debuted earlier this year at SFMOMA and was even more ambitious in scope. Made in San Francisco, which is being dramatically reshaped by shifting demographics and rising living costs, The Chronicles of San Francisco is a digital, moving mural that features the portraits of over 1,200 people from every corner of the city, as well as recorded interviews with each of the participants in the project that visitors can listen to in the museum gallery. The third chapter of the series, entitled The Gun Chronicles: A Story of America, was unveiled in November of 2018. JR traveled to three U.S. cities profoundly affected by guns—Dallas, St. Louis and Washington, D.C.—to invite over 245 people to share their views, describe their experiences and participate in a mural project for TIME’s November cover. For the project, JR and TIME are nominated for a 2019 Emmy in the Outstanding New Approaches category

For this fourth and latest iteration of Chronicles, JR photographed the people of New York City, which has been his home for the last several years. New York is the most populated city in America and the most linguistically diverse in the world, its identity a direct reflection of the history of immigration in this country. Throughout the spring of 2018, the artist’s mobile studio, which is housed in a semitruck, moved to fifteen different locations across the city’s five boroughs. For weeks the studio was an active site of collaboration and interaction between fellow New Yorkers, as JR and his team worked with participants to shoot an individualized portrait and record their stories. Often enlisting those who passed by the studio, JR photographed people in their own neighborhoods with the mandate that they should present themselves as they would like to be seen and remembered. Altogether, over 1,000 New Yorkers participated in the project. Set against the city’s iconic architectural landmarks, each portrait is arranged in JR’s signature non-perspectival style. This visual parity asks us to consider each New Yorker’s unique contribution to the character of their city. The works on view at Perrotin New York include a series of prints that are excerpts from the mural, allowing viewers to engage with JR’s work as a series of intimate vignettes. Another set of works feature annotations and cut-outs that point to how the artist constructs the final image in the mural by systematically layering numerous photographs and composites into a single seamless picture. Finally, a new documentary film, debuting at Perrotin New York, captures the collaborative process behind the making of The Chronicles of New York City, presenting never-before-seen footage.