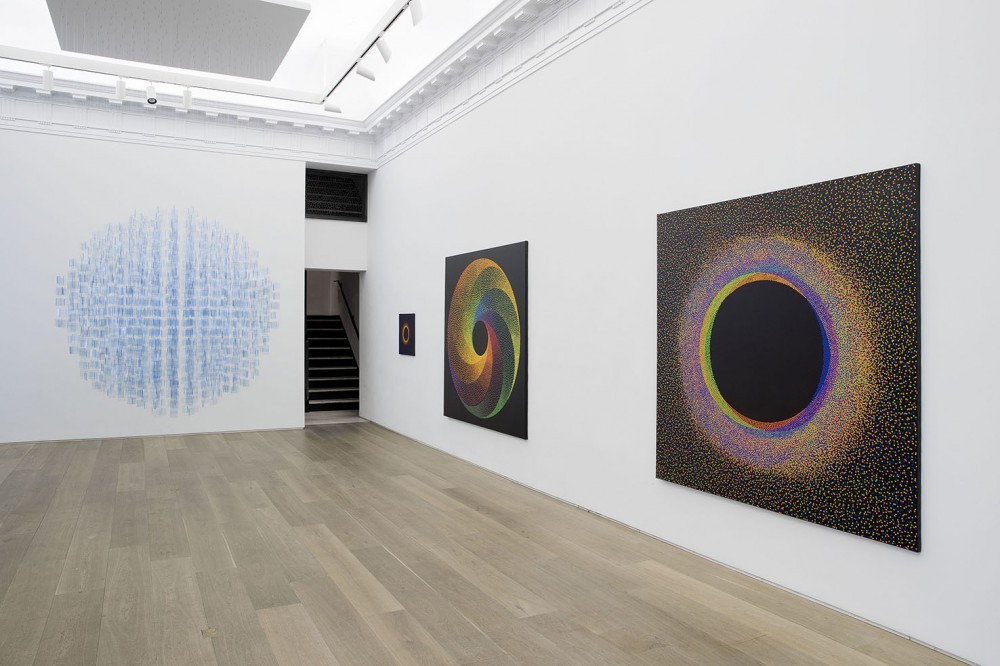 “All my work invites viewers to feel free to interact, with their own personality, their own vision and their own feelings, not imposed by me. The ideal spectator is the most free, most open, least conditioned. The most important thing for me is that brief moment of interconnection.” – Julio Le Parc, 2014

Galerie Perrotin is pleased to present the first solo exhibition of Julio Le Parc in New York since 1973. This will be the final exhibition at the Madison Avenue gallery before relocating to 130 Orchard Street on the Lower East Side in April 2017.

Julio Le Parc’s early paintings were influenced by the Constructivist Movement of Arte Concreto Invención, as well as artists such as Piet Mondrian and Victor Vasarely. However, since 1959, Le Parc has continued on his own independent path applying rigorous organizing principles to his paintings whether exploring the use of 14 scales of colors, or white, grey and black in varying yet precise endless combinations. From 1960 onwards, Le Parc has produced simultaneously paintings that are founded on rigorous systems of organization of surface, and correlation of forms, as well as vibratory reliefs and immersive installations.

He has long been concerned with what art could do to consider the participation of the public, and his research into perceptual instability as a pioneer of Kinetic and Op Art led to important works involving light and movement. Le Parc was particularly interested in opening up new relations between the art object and viewer whereby the visitor is no longer a passive, dependent observer, but the active participant within a dynamic experience.

On show at Galerie Perrotin are two paintings from the “Modulation” series alongside four from the latest “Alchimie” body of work which are impressively large in scale. Involving several stages of drawings and smaller paintings they have evolved into compositions often containing subtle yet intense, progressively shifting simple forms. In painting “Alchimie 332”, 2016, we see a large black center circled by overlapping pink, green, and orange dots, clustering intensely where they overlap, scattering out against a black background as if atomized, creating an effect that is simultaneously disorientating and hypnotic.

Also exhibited, is a recent three dimensional composition “Sphère bleu fluo” (Fluorescent blue sphere), 2001-2016 that is 7.2 feet (2,20 meters) in diameter and formed from hundreds of blue translucent plexiglas slats, creating transparency, movement and light that shifts with the air as well as by the position of the viewer.

Two key light installations, “Continuel-lumière avec 49 cylindres” 1967-2016, and “Lumières alternées”, 1993-2011, portray light as not a state but a shifting temporal process using motors and random movement. Le Parc believed early in his career, that only an indeterminate, contingent art could adequately represent our unstable contemporary reality and he is widely acknowledged for utilising complex ideas that include the aesthetic and ethical into his practice.

Julio Le Parc was born in 1928 in Mendoza, Argentina and lives and works in Paris since 1958. He was awarded the International Grand Prize for Painting at the 33rd Venice Biennale in 1966. A defender of human rights, he fought against dictatorship in Latin America through numerous collective anti-fascist projects.