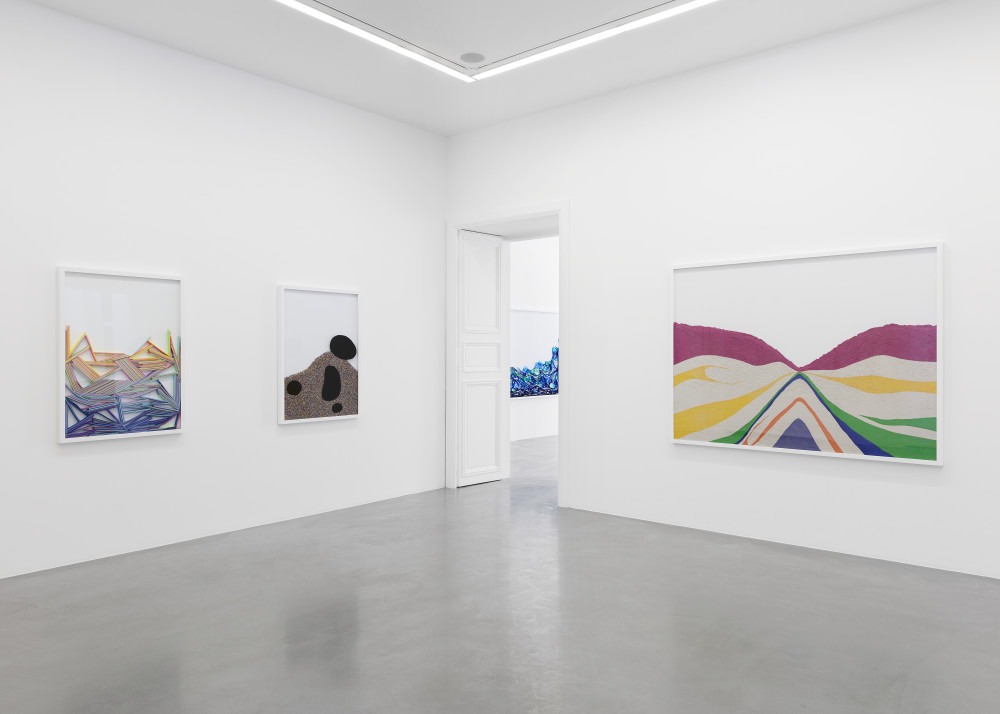 After all these years, my work is still in motion. Research is very important: I still want to invent new things, to open up my work to multiple fields or to numerous playing fields.

For this exhibition I once more relied on frames, making use of them as an object that constitutes a work of art. In the past already, some works could not exist without their frames: ‘inversion magnétique’ (magnetic inversion), acrylic drops on the glass of the frame, or my ‘maladresses’ (gaffes) and ‘dessins à franges’ (fringe drawings). This time, at the risk of it seeming ironic, I used the frames as containers.

I would like these latest works to be perceived as a gesture, a simple gesture, that of pouring materials into the bottom of a frame. The result, this sunken material, can be approached in two contradictory ways: either as a collapse or as an elevation, either as a fall or as an accumulation. These spilled materials come from the studio: plastic beads, sequins, scrap wood or pieces of Plexiglas, gelatin, sand, glass, etc. In a way, I have repurposed them, recycled them here. Surprisingly, we can see that these materials with their acidic colours are almost all made from oil. As they sink, as they fall, they overlap in layers that can be seen through the glass of the frame, as if it were a cup with its sediments, impressions of different times, as if something buried or hidden were being revealed to us. Of course this technique is similar to the popular art that consists in creating creating images with coloured sand in bottles. But these elements, these pearls, these precariously balanced materials, are for me more like sculpture rather than images since the key here is mainly the law of gravity.

What is shown seems to be accidental, temporary, unstable, open to revision if the work is moved. Strangely, a work of art has become an object in motion. These constructions question the definition of a work of art as something permanent, controlled, chosen. Here it is a sign of movement, a balance that forms a risky image and could have been quite different.

In addition to these frames, other forms of accidental construction are exhibited. As with the frames, the energy at work here is gravity, but in the form of the force of attraction, of coagulation. Thus, the same materials found in the studio agglutinate and freeze to form large chunks. A surprising vegetation emerges from these agglomerates, from this hostile environment – proof of an unconsciously optimistic resistance, of vitality against the world. In the centre of the last room, an imperceptible shower of pink crystals appears as another adaptation of changing natures.

The exhibition as a whole evokes a strange museum of natural history that is mainly composed of artificial materials. A unique collection of works that collapse as though disrupted by a storm and cheerful chemical minerals, like a report on the current climate.