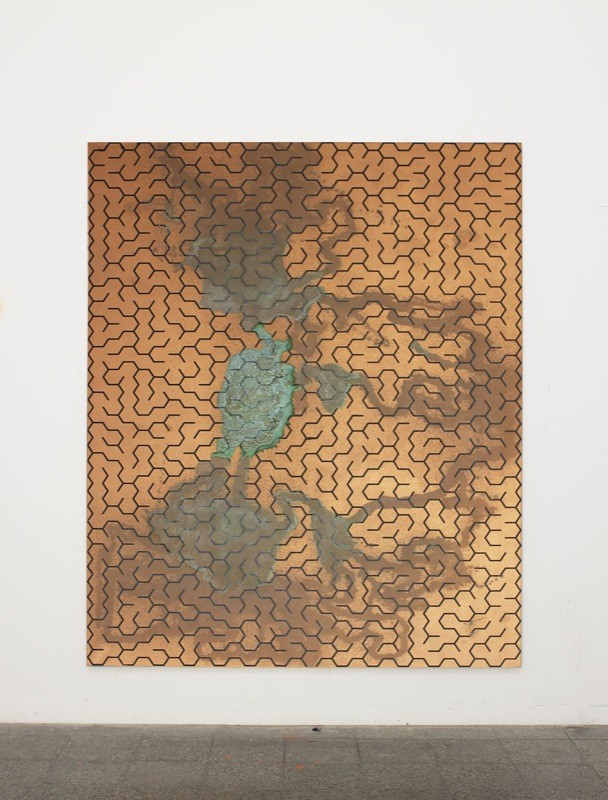 Galerie Perrotin, Paris is pleased to present a solo exhibition by Michael Sailstorfer entiltled “Freedom Fries am Arbeitsplatz” gathering seven “Mazes” paintings and two Statues of Liberty.
Interview of Michael SAILSTORFER by Philippe Joppin, July 2013.
Philippe Joppin: In the past you have been doing several series of sculptures but in the last shows I have seen a lot of paintings. How did you get into this process?
Michael Sailstorfer: I started the series of “Mazes” paintings in 2009 and did show them for the first time in 2012. In 2009, after many thoughts and doubts, I decided to make this shift to painting as it was a natural process and next step in my practice...
the idea came and as an artist I don’t want to be limited by a medium or material to use. First is the Idea, second the choice of material...That’s how I usually start to work and that’s why there is a big diversity in my practice and every piece or series of pieces looks different and starts with new problems, doubts and decisions to take.
This process is illustrated in the “Mazes”. All the, “Yes” and “No”, “Rights” and “Lefts”, “Ups” and “Downs”, good and bad decisions are visible on the surface and make the artwork.
With this new series of “Mazes”, I also have the feeling that your references are moving from the German cultural scene to the American Pop Culture?
In the latest “Mazes” there is a direct reference to Andy Warhol’s oxidation paintings. For the canvases I use a primer with copper or other metallic pigments before the maze structure is screen printed onto them. By spraying acid on the canvas or pissing on the surface I try to find the way through the maze, what makes the primed surface oxidate... the “Mazes” series you are collecting images from Internet while you are usually playing with the nature and the way the artist could turn it into another reality. It is also something that interests you with these web references or it is more the gesture and the infinite possibilities of the medium that interest you?
Almost every new piece starts with an online research. When I started to do the “Mazes” I looked for templates and found thousands in the web. There are online maze-generators, web-sites for children and pastime. It was the easiest way to get the material and as an infinite resource. But I also like the idea of transforming random and infinite possibilities by right and wrong decisions into a unique piece of art.
For the show at the gallery you are also working with the iconic Statue of Liberty. Is there a relation with the fact that Bartholdi was a French Sculptor or it just come out from the idea to change this iconic image as you are doing with the Warhol piss paintings?
On my way from Berlin to the countryside in Brandenburg I stopped at a place that sells second hand construction materials. They had this 2,5m tall aluminum cast of the Sculpture of Liberty in their garden next to fragments of soviet monuments, old bathtubs and parts of the Berlin wall. I decided to buy the sculpture and had it in my studio for quite some time...
Planning my show for Galerie Perrotin in Paris I decided to show it there, as the real sculpture was a French present. I liked the idea to take it literally and use the sculpure as a big drill to perforate the gallery walls.
I think the idea was not to change the iconic image but to see what this iconic image or the word ‘Freedom’ can be used for and what connections could be made.
As for older sculptures you like to associate a ready made with a electrical combination. I see a close relation between “If I should die in a car crash it was meant to be a sculpture”or “Zeit ist keine Autobahn” and the Statue of Liberty sculptures?
It is not primarily about the electric device. It is about playing with ready-made that carry certain references. Those references and ideas are put into new contexts through small shifts or transformations. Sometimes a motor and a plug are needed to get this working, sometimes an angle grinder is enough. For example when a police car is transformerd into a drum kit. “Drumkit” 2005.
And of course there are close relations between the new Statue of Liberty sculpture and previous pieces such as “If I should die in a car crash it was meant to be a sculpture” or “Time is not a motorway”. In “Time is not a motorway” a car tyre, powered by an electric motor, grinds against the gallery wall and gets used up during the exhibition period. The floor fills with rubber dust and in the whole gallery you can smell the burnt rubber. This piece is about time. Getting older and getting grey hair...
It’s hard to talk about the new Statue of Liberty sculpture as it is still in production and I haven’t seen it in real. But it is about freedom, in many ways...
But I have an other idea about the electric motor in some pieces. It gives the piece a timeline...makes the piece perform, without human power,...
and thus the sculpture is humanized and becomes the performer on the stage, the white cube...
The title of the show and also of your second sculpture is “Freedom Fries am Arbeitsplatz” makes me think of “Honigpumpe am Arbeitsplatz” by Joseph Beuys. Is this reference on purpose ?
“Honigpumpe am Arbeitsplatz” is one of the most important artworks for me and a lot of his ideals are present in this piece. The title and also formal decisions in my piece are references to “Honigpumpe am Arbeitsplatz” . This piece conceptually and formally frames the whole show. “Freedom Fries am Arbeitsplatz” might be read as a 2013 reflection on Joseph Beuys political ideas and where we see us today.
www.galerieperrotin.com