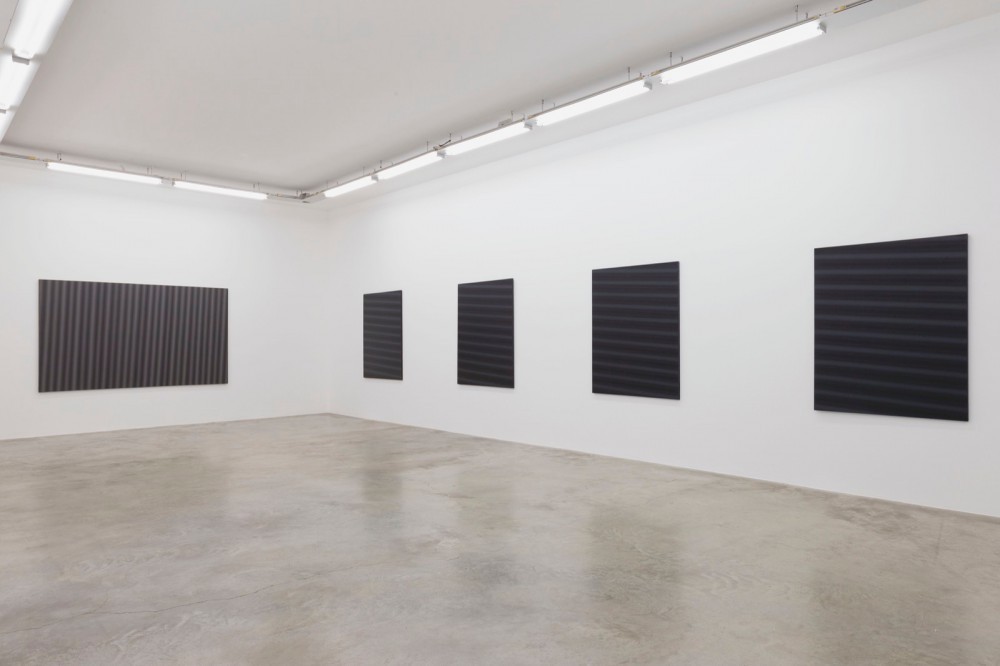 The current exhibition entitled ORIGIN organized at Galerie Perrotin, Paris, meaningfully traces back the footprints of Origin, a group founded in 1962 by a few elite artists comprised of graduates of the painting department at Hongik University, a prestigious private school in Korea. Origin has continued its development for over fifty years, which is exceptional for an art group, and has contributed in refreshing and broadening the boundaries of abstract art. Artists participating in this exhibition are the original founding members of Origin; CHOI Myoung-Young, SUH Seung-Won, and LEE Seung-Jio. These artists are prominent members who exude distinct individuality while consistently exploring abstract art.

The artists participating in this exhibition were born in the early 1940s and are live witnesses of the Japanese occupation, the Korean War, and the 4.19.1960 Revolution. Political turmoil such as the dark period of Japanese occupation, the Korean War, and the separation of families have all left deeply etched scars and unforgettable pain to Koreans. Therefore it is appropriate to examine the position of these artists within this historical context. In the early 1960s when Origin was founded, the Korean art world was divided into three groups. The first group was academism imported from Japan that focused mainly in imitation and reproduction, the second group was ‘hot abstract’ that transferred the sublime pains of the Korean War into paintings, and the third group was ‘intelligent painting’ that reflected the new social ambience following the 4.19.1960 Revolution. These three groups are all closely tied with Korean historical events, especially the second and the third groups that were founded by the graduates of art schools established after the national foundation of The Republic of Korea in 1948. Accordingly, these two art groups symbolize the beginning of Korean contemporary art and are therefore critical markers in the history of Korean Art.

There is approximately ten years gap between the second and third groups and their concepts are also quite distinct. It is worthy to note, while the former expresses the pains and ravages of war, the latter intends to calmly reconsider “the origins of painting” in a whirlpool of changes with a rather constructive vision of the world. “The artists of Origin aggressively confront hyper-emotion of the hot abstract which swept Korean avant-garde art. Their works might be viewed as aristocratic but they insist the canvas as a medium, and master the flatness of painting with moderation and control.” (LEE Yil “Vibrant Young Art”, 1967)

If one counter-questions whether “simultaneous intelligent and sensuous” art truly existed, we can find its precedent in the works of Origin artists, especially those who are included in this exhibition. CHOI Myoung-Young, SUH Seung-Won, and LEE Seung-Jioare representative artists who reflect on the flow of this period. Their work became more apparent around the time of Exhibition of Korea Young Art Combined held in 1967. At the time, CHOI Myoung-Young attempted abstract works that labor over the fundamental issues of painting, SUH Seung-Won experimented with restricted space arrangement using triangular shapes and colored sticks, and LEE Seung-Jio tested geometric abstraction through the use of repeated cylindrical structures. With respect to such trend, art critic OH Kwang-Su raised awareness of the “new realization of objective painting”. “Geometric abstraction demonstrated by Origin is rooted in an explicitly logical reasoning and therefore has an intellectual component. It also means that the cold abstract can be considered the opposite of the hot abstract. In any instance, cold abstract first and foremost focused on the recognition of the canvas which maintained a sense of objectivity and indifference.” (OH Kwang-Su, “Chilled Fever, Chaos and Meditation”, 1979). Consecutive emergence of different art groups throughout the early and mid 1970s became a trigger for broadening experimentation in sculpture, installation, and performance. Still, the most prominent movement of the 1970s was decidedly Dansaekhwa (monochromatic painting). Dansaekhwa was formalized in 1975 through the exhibition Five Korean Artists, Five Kinds of White at Tokyo Gallery in Tokyo, which led to Korea: Facet of Contemporary Art at the Tokyo Central Museum of Art in 1977, and The Latter Half of the 70s: An Aspect, a touring exhibition at five different art museums in Japan in 1983. Dansaekhwa became well known and gained further recognition through its inclusion in large-scale art events such as Seoul Contemporary Art Festival and Ecole de Seoul, thereby firmly establishing its place in the mainstream of Korean Art. The works of Dansaekhwa developed at approximately the same time with the artists of the earlier generation and this was desirable for the three artists who sympathized and shared the cultural state of the time. Dansaekhwa that dominated the Korean art scene in the 70s and 80s reflects the Korean sentiment that suppresses, lets things rest untouched, and prefers pure-mindedness. Likewise Dansaekhwa artists have a restrained approach to their use of color. They emphasize asceticism through repetitive actions such as layering, spraying, or marking with paint, and while utilizing abstract elements they never let it become the ultimate objective and rather use it as a lever for the expression of their inner-self, spiritual space, nature and universe. Similarly it is not difficult to find such artistic properties in the works of CHOI Myoung-Young, SUH Seung-Won and LEE Seung-Jio.

First of all, Sign of Equality by CHOI Myoung-Young demonstrates the expandability of space. His space is not restricted and can expand up or down indefinitely. This can be interpreted as intent to extend the surface to where the body meets the subject rather than to simply emphasize the importance of space. Assuming that the canvas is a small universe, the artist must make countless contact with it. CHOI focused on this idea and made his contact using his fingerprints. What is especially noteworthy is that he used his body rather than a brush as a mode of expression. His works seems to have consistently derived from actively making contact with the canvas rather than simply using his body as a tool, which is far more common. He used a method of dabbing paint with his fingers as if he was making fingerprints on the canvas and yet each fingerprint is unique. Density of paint, expression, placement and the way that the paint dripped are all different. Power, intensity and speed of the finger each left a different mark. As such, for CHOI Myoung-Young, the canvas is a place to cultivate his mind, a place for experience, and furthermore a place to encounter the universe. As exemplified in works such as Conditional Planes, his attempts became more formalized in the late 1970s, characterized by “cumulative gestures”.

SUH Seung-Won placed geometry at the heart of his painting. He has continued to make such works for over fifty years, which is why he might also be called “an artist of long breath”. His works are also invariably titled Simultaneity. On the canvas, large sections have an overlapping of diamond shapes in various colors, an overlapping of solid lines, or a concentration of box-shaped structures. The canvas base remains monochrome, as if implying the artist’s serenity of the mind. His abstract works that place geometry and colors at the forefront not only recognize the surface sculpturally but also maintains a lyrical stance of colors and forms, and furthermore form a harmony together with the space and the forms. Despite maintaining a perspicuous model, his works appear to bring the distance of the relationship closer through dialogues with his designated virtual world of geometry (the subject).
Moreover, the base is not limited to being a simple background in his work. SUH Seung-Won prepares the base of his canvas by repeatedly applying an undercoat some ten odd times, just as if one is preparing the soil before constructing a building atop. Undercoat is generally applied in many layers to improve coloring but another reason is implied in this case. The artist’s desire to seek the truth of inner-self is implied in this act of repeatedly painting and smoothing the surface. We inevitably look only at the surface of the final work but in fact his work involves hard labor in its production. Such meditative aspect of his work may be the fundamental reason why he continues to work in this way.

Nucleus (generic title of the works) by LEE Seung-Jio is composed of black and white stripes, or rather, of elongated rectangles that one might regard as representation of cold metallic matter. LEE continued to work in this pattern until the early 70s. By repeatedly applying brush strokes, the artist painted horizontal, vertical or diagonal strips that were darker towards the border and lighter towards the center, essentially creating the appearance of a three-dimensional cylinder. However, from 1975, he began to gradually move away from the cylindrical structure and began to cross light and shade in blue or black hues. Though he did not drastically change his techniques in these paintings, he reduced the difference in brightness between the center and borders thereby blurring the clear borderlines of the cylindrical shape. This change in his work could be recognized as a conscious “awareness of the flatness of Dansaekhwa”, which became prominent at the time. The works of LEE Seung-Jio during this period are viewed as being most meditative and tranquil amongst his oeuvre. The dark tones that cover the canvas separate, blend, and realign into yin and yang in repeated variations and then spread to the entire canvas, and “covertly vibrate on an infinitely successive, immanent rhythm”. (LEE Yil)

In Korea, abstract painting was the most prominent in the 1970s. Although this period was an especially difficult time that it even left a name called “Bo-rit-go-gae” (period of spring poverty), the hardship also allowed for the rise of a very important art movement, Dansaekhwa. Some Dansaehwa artists such as PARK Seo-Bo, CHUNG Chang-Sup, HA Chong-Hyun, YUN Hyong-Keun, and CHUNG Sang-Hwa displayed respect for matter and assimilated to the world of nature, whereas artists such as CHOI Myoung-Young, SUH Seung-Won and LEE Seung-Jio sought to surpass materiality with an articulate formative vocabulary in a steady and constant relationship with matter. They absorbed in the joy of simplicity as a result of meditation of the inner-self and expressed the light and shadow of life in black and white.

This exhibition seeks to demonstrate how Korean artists who are rooted in tradition confronted and overcame the ever-changing contemporary issues of the era. Korean artists of the 70s sublimated contemporary art to a “sculpture of the mother tongue” and on one hand appealed to the universal standards of aesthetics while modernizing tradition on the other. At the forefront of this movement were notable artists such as CHOI Myoung-Young, SUH Seung-Won and LEE Seung-Jio.
The realization of contemporary art rooted in the traditional spirit of Korea was a critical issue for Korean artists and it is only natural that these artists came to prominence due to their experience of dark history and hardship in the period of modernity. It is also a great joy to discover the state of pure meditation that is distinguished from an entangled spirit. It is hoped that ORIGIN, which opens at the Galerie Perrotin, will provide an opportunity to introduce and illuminate the leaders of the Korean contemporary art to the sophisticated art aficionados of Paris.