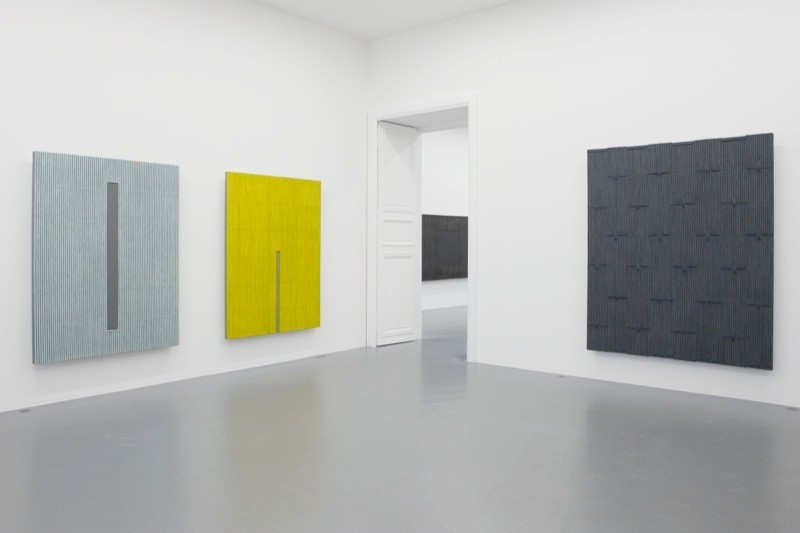 Galerie Perrotin, Paris is pleased to present the first solo exhibition in Paris dedicated to Park Seo-Bo, a major figure in Korean painting and founding member of the Dansaekhwa monochrome movement. Curated by Kim Yongdae, former Director of Daegu Art Museum, the exhibition presents 40 paintings from the “Ecriture” series, created between 1974 and 2014.

The exhibition, on both floors at 76 rue de Turenne, reflects the profound interest in Korean painting across the world; interest that has manifested itself in major exhibitions such as “Dansaekhwa: Korean Monochrome Painting” at the National Museum of Contemporary Art in Seoul (2012) and more recently in Rome, New York and Los Angeles. This exhibition at Galerie Perrotin, Paris also holds great personal significance for the artist. Back in 1961, Park came to Paris to participate in "Jeunes Peintres du Monde", the UNESCO sponsored competition for young painters, only to realize upon arrival that he had missed the notification that the competition had been postponed. However, Park was determined to stay in France and used this opportunity to see the works of the great Art Informel artists, whose work pervaded the art scene at that time. This one-year experience and his participation in the Biennale de Paris in 1963, had a considerable influence on his work as an artist, laying down the foundations of Park’s unique language, which led to the “Ecriture” series

After creating works inspired by Art Informel at the end of the 1950s, Park Seo-Bo started to focus on paintings that emphasized expressionistic gesture, such as with the “Primordialis” and “Hereditarius” series from the early 1960’s. The “Ecriture” series, which Park refers to as the ‘journey of the hand’, began in the mid 1960’s and signified a new chapter in his work. In the early “Ecriture” works, Park covered canvases with light gray or cream-colored oil paints and drew continuous lines with a pencil on the still-wet surfaces. Through this repetitive and physical act, Park sought to empty his works of external perception and record his spiritual universe. In the early 1980's, Park used hanji, traditional Korean paper, to greater emphasize the virtue of material. He piled layers of wet hanji on the canvas, saturated the layers with watercolor paints, and then applied strokes on the paper surface using his fingers or tools, which pushed up the material creating traces and reliefs. This process generates an energy that permeates the entire canvas. Later works introduced more vertical structural elements, and emphasis was placed on a more understated, meditative atmosphere. In her essay, Barbara Bloemink emphasizes the works' "three-dimensionality" when viewed closely and from the side, as the paper is pushed against the incised lines1 . A transition in color was made from his initial ascetic, neutral achromatic palette to various colors that commune with nature, where colors are originated, such as the “color of water”, delivering a subtle and simple flavor.

As Barbara Bloemink explains, Park has been viewed by many as a Minimalist; however, his intentions differ markedly from Western Minimalism in its open espousal and implementation of Eastern philosophy and sensibilities2 . Park’s works are the result of in-depth thinking and great physical energy, encouraging the audience to go beyond simple visual assessment in order to fully understand and experience the works with their minds. This intense and endless process of emptying himself into his work reflects Park’s belief that "what is minimal embodies the most", which is also indicative of his notion of “doing art” as deriving from the discipline of the spirit. In a touching 1994 tribute to the artist, renowned French art critic Pierre Restany suggested that Yves Klein and Park Seo-Bo “differ not by nature but by destiny.” Klein’s explosive energy is, according to Restany, both consumed by and tending towards a cosmic void. By contrast, Park Seo-Bo is not seen as being driven towards any kind of telos, instead as existing and wrestling within what Restany calls "the organic identity of the whole".