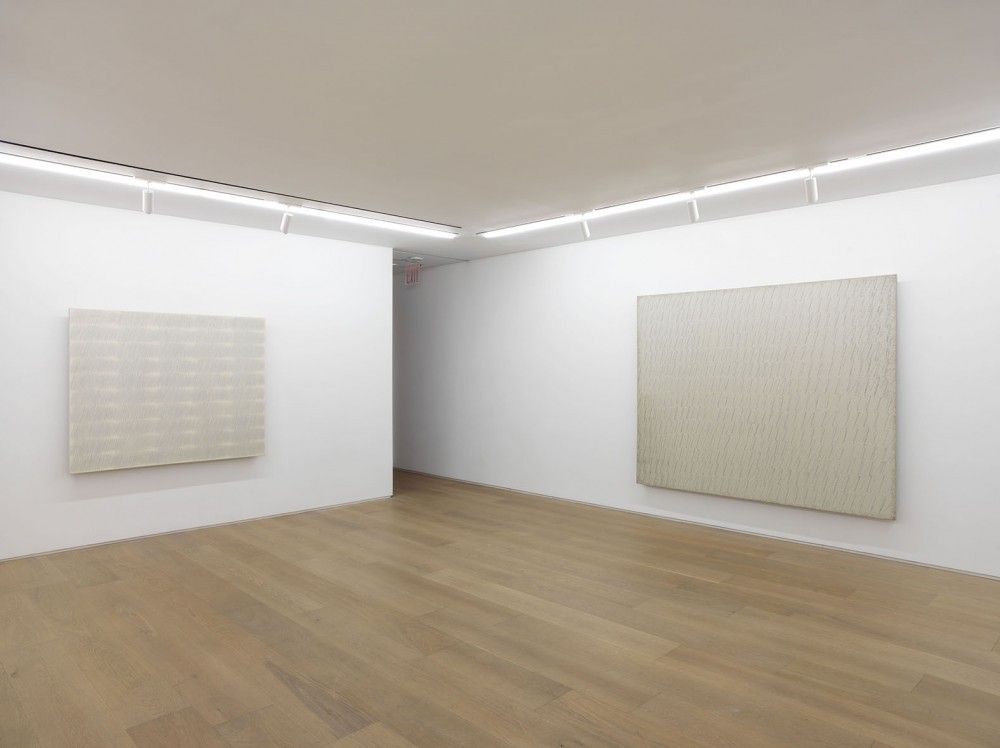 Born in 1931, Park Seo-Bo is a seminal figure in Korean contemporary art and one of the founding members of the Dansaekhwa monochrome movement, a synthesis between traditional Korean spirit and Western abstraction, which emerged in the early 1970s in post-war Korea and has gained international recognition since. An official collateral event in this year’s 56th Venice Biennial, “Dansaekhwa”, is currently held at the Palazzo Contarini-Polignac (until August 15) and on the occasion of the Year of Korea in France (2015-2016), a major exhibition dedicated to Korean artists in France - including Park Seo-Bo, will take place at the Cernuschi Museum in Paris: "From Lee Ungno to Lee Ufan: Korean Artists in France" (16 October 2015 - January 2016). Although the Korean monochrome movement has never been defined with a manifesto, the artists affiliated with Dansaekhwa, including Chung Chang-Sup and Lee Ufan, are commonly known for their use of a neutral palette (namely white, beige and black), their material emphasis of the pictorial components and fabrics, and their gestural and systematical engagement within the artworks in the making. As a matter of fact, in Park Seo-Bo’s paintings, process and discipline prevail, whereas the French Art Informel scene originally inspired the artist’s early aesthetics.

Indeed, back in 1961, Park Seo-Bo earned a UNESCO scholarship to study and ended up spending a whole year in Paris, where he furthered his knowledge of Art Informel, which arose in Europe parallel to the American Abstract Expressionism during World War II and became prevalent throughout the 1950s. As soon as 1957, Park Seo-Bo had already helped establish in Seoul the Hyun-Dae Artists Association around the principles of Art Informel, the gestural and abstract techniques of which, like those of Action Painting and Color Field in the United States, would enable young Korean artists to express their anguish in the immediate aftermath of the Korean War. The influence of Art Informel in the early works of Park Seo-Bo can be seen in his series “Primordialis” from the early 1960s, which is characterized by aggressive brushstrokes, dark hues and amorphous forms. Yet by the mid-1960s, the artist had already rejected the occidental manners that he had primarily adopted and started devoting his time to learning about oriental philosophy.

Park Seo-Bo’s own pictorial tabula rasa, if you will, and subsequent spiritual introspection gave birth to the series of monochromes he calls “Ecriture”, which means ‘writing’ in French and has become the generic title of all his artworks and exhibitions since 1967. For almost 50 years now, within a strict and reduced vocabulary - which he narrowed down to the repetition of simple patterns echoing throughout his paintings and the limited color palette of Dansaekhwa - Park Seo-Bo has never ceased to empty his monochromes from, if not the trace of his gestural commitment, self-expression or the emotional outpouring that a single impulsive stroke carried in his early days. In this regard, his pictorial endeavors do certainly share some striking similarities with the parallel evolution in France of “the painter of black”, Pierre Soulages, who also started off his career as a leading figure of Art Informel.

Park Seo-Bo’s exhibition at Galerie Perrotin, New York presents a broad selection of paintings corresponding to different periods of “Ecriture”, his lifelong and existential exploration of monochrome. Throughout the 1970s, the artist employed an original technique, which consisted of inscribing repetitive linear or arabesque patterns with a pencil onto the wet surface of oil paint, which had been previously applied to the canvas. In the process of making what he came to refer to as his “white drawings”, which are reminiscent of the art of calligraphy, Park Seo-Bo learned to control and extend himself onto his canvas, so as to become one with his work. This epitomizes the fusion of mind and body, which is essential to Asian philosophy, as opposed to the Western Cartesian premise of a split.

In the early 1980s, Park Seo-Bo began to experiment with Korean hanji, a traditional handmade paper made out of mulberry bark, which became his fabric of choice and the key to his unique technique. From this point forward, the artist would first and systematically pile onto his canvas layers of wet hanji, which had been previously saturated with watercolor paint, before proceeding to the meticulous molding of repetitive geometrical patterns with the pressure of his fingers or tools onto the textile thickness. In other words, the fabric itself would actually record the artist’s repeated gestures. Since the 1990s, which Park Seo-Bo refers to as his “black and white” period, the patterns have become exclusively vertical furrows stretching from top to bottom all over his paintings, while the 2000s mark the progressive introduction of vivid colors into his monochromes, leaving behind the neutral hues of Dansaekhwa. His renewed palette is inspired by the colors he found in nature or the cityscape of Seoul, where he lives and works.

Park Seo-Bo’s minimalistic aesthetics have often been formally compared to that of Western Minimalism. However, they differ greatly in intent, as the approach of the latter is purely conceptual. If both claim to clear art of self-expression in reaction to either Art Informel or Abstract Expressionism, Park Seo-Bo’s repetition of geometrical patterns, which are handmade as opposed to modular and manufactured, is the actual means of his spiritual journey towards self-purification, the sine qua non of enlightenment. Park Seo-Bo makes art to empty his mind and his exceptional discipline – some of his works take up to a year to complete – is similar to the meditative routine of a Buddhist monk. Both aspire to a higher level of awareness beyond the limitations of the ego, which, accordingly, one must break free from.