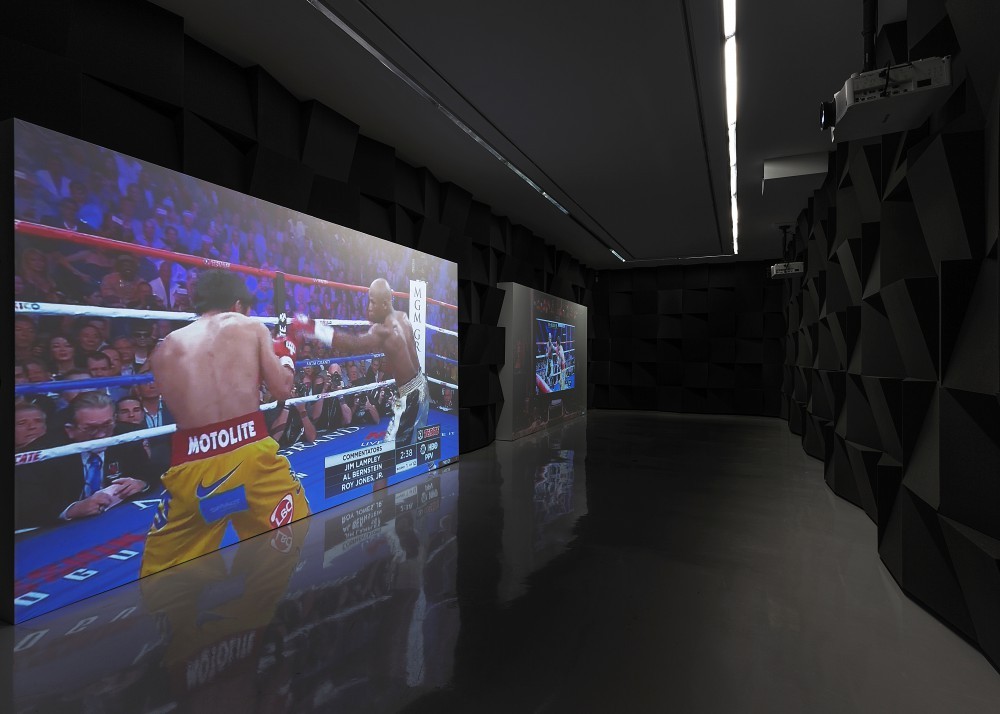 Perrotin Paris is pleased to announce a solo exhibition of Paul Pfeiffer. Known for his innovative manipulation of digital media, Pfeiffer recasts the visual language of popular spectacle to examine how images shape our perception of ourselves and the world. This exhibition presents works created between 2015 and 2018 from several ongoing series, illustrating the breadth of the artist’s practice.

On view is Pfeiffer’s 48-minute multi-channel audio and video installation, Three Figures In A Room (2015-2017). The work features the televised footage of Floyd Mayweather and Manny Pacquiao’s highly publicized
and most lucrative boxing match at the MGM Grand, Las Vegas, in May 2015, billed as “The Fight of the Century”. Removing the fight’s original audio, Pfeiffer replaces it with an eerily quiet Foley1 soundtrack that isolates the physical exertion of the boxers and the movements of the stadium audience: the rhythmic thud of footsteps; the acute smack of leather on flesh; the hissing snarl of exhausted breath; the mammoth roar of a thousand spectators, winnowed to merely a few truncated applauses. A second video channel shows the sound technicians, the Foley artists, as they distill and recreate these sound effects in their studio using a myriad of props. Mirroring the boxers’ athleticism and focus, the Foley channel plays in sync with the fight channel, each placed on opposing sides in the gallery space. Audio playback alternates from one channel to the other, sparring throughout the room and enveloping the viewer in the meticulous process of sound production.

Also on view are five new works from Pfeiffer’s Desiderata series, in which the artist manipulates televised footage from The Price is Right, the longest running game show in American history, having debuted in 1972. Digitally erasing the show’s host, prizes, and other narrative trappings, Pfeiffer hones in on the facial expressions and body language of the game show’s contestants, elucidating their shared human vulnerability. Recontextualized as a Seussical landscape of lurid color and kaleidoscopic proportion, the absurdity of the stage mirrors the isolation of its participants and the unattainable folly of their material desires. Empty shelves and prefab props bear evidence of decades of use, underscoring a sense of systematic, constructed false promise.

In another series, Pfeiffer transforms the image of Michael Jackson into a “creature of bristling symmetry. Titled Live Evil, it suggests a kind of weapon-twirling Kabuki cyborg or a Cubist bodhisattva and is superbly cross-cultural and in a visual, instantly accessible manner.”2 The recordings are from Jackson’s massively produced HIStory World Tour, attended by approximately 4.5 million fans between 1996 and 1997. The works show a headless Jackson in an iridescent, shimmering suit dancing onstage, his figure mirrored such that only the contours of the body as well as his lanky appendages remain. The dissociated man performs to the viewers’ demand, moving in a distorted rendition of the artist’s signature choreography.

In another room of the exhibition are three works from Pfeiffer’s ongoing Caryatid series, begun in 2003. Screened on lustrous chromed television sets of varying sizes, the HD videos show slow-motion excerpts of boxing matches in which the attacking opponents have been digitally removed. Cast into a torpid yet tense solo performance, the remaining boxer invites close scrutiny. Obscure corporeal details are brought to the fore, highlighting the brutality of impact from an invisible assault, while the work’s presentation as sculptural object serves to prompt further meditative viewing. Their title, Caryatid, refers to the classical Greek columns carved in the form of draped maidens, who, according to legend, stand at the Acropolis in penance for an ancient treason.
Nora Woodin

Paul Pfeiffer was born in Honolulu, Hawaii and currently lives and works in New York City. He has had one-person exhibitions at the Whitney Museum of American Art (2001), MIT’s List Visual Arts Center and the Museum of Contemporary Art Chicago (2003), the National Gallery of Victoria, Melbourne (2005), MUSAC León, Spain (2008), the Hamburger Bahnhof, Berlin (2009), the Albright-Knox Art Gallery, Buffalo (2010), and was the subject of a retrospective at Sammlung Goetz in Munich, Germany in 2011. Pfeiffer’s works have also been included in international, large-scale exhibitions such as the Venice Biennale, Biennale of Sydney, Busan Biennale, Cairo Biennale, and Whitney Biennial. He has received numerous awards and fellowships, including a Fulbright-Hayes Fellowship and the Bucksbaum Award from the Whitney Museum. The artist is the focus of MCA Screen - a project room exhibition at MCA Chicago, through May 2018 - as well as a solo pavilion at Inhotim, Brumadinho, Brazil in the Fall of 2018. Participation in forthcoming group exhibitions include Private Lives at Centrale for Contemporary Art, Brussels; A Beast, A God, And A Line, for Dhaka Art Summit 2018, Bangladesh; Michael Jackson: On the Wall at The National Portrait Gallery, London; and Art in the Age of the Internet, 1989 to Today at ICA Boston.
www.galerieperrotin.com