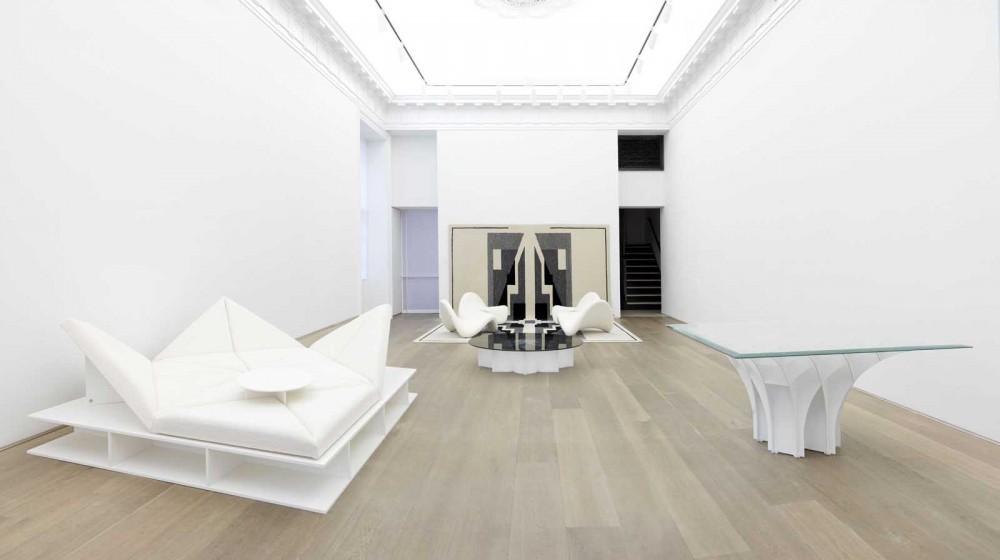 “I was aiming to show just how far we could make
modernity go.” Pierre Paulin

The exhibition displays Pierre Paulin rare original designs produced in limited editions by Paulin, Paulin, Paulin and includes: “La Déclive” from 1966, “Dos à dos” & “Face à face” from 1968 ; “Jardin à la française” armchairs, coffee tables and carpets made specially for the Palais d’Iéna in Paris in 1985; “Tapis-siège” for the “unreleased” Herman Miller project in 1970; “Rosace” coffee table, 1971; “Diwan” rug, 1992 as well as Table “Cathédrale” from 1981. This exhibition follows on from his show at Galerie Perrotin, Paris, 2015.

Paulin, Paulin, Paulin, the firm founded by Pierre Paulin’s family, aims to promote his work by producing limited editions of his designs that never got beyond the model or prototype stage, or that were uniquely created for special state commissions, and hence never produced before. Paulin, Paulin, Paulin, collaborates with the finest craftsmen in Europe and is backed by the expertise of Michel Chalard, Paulin’s closest collaborator and technical adviser since 1965.

The official names of Pierre Paulin’s creations evoke inventory or industrial models numbers, F560, F437, F582, F577, but more well known pieces have descriptive titles such as Mushroom (1960), Orange Slice (1960), Ribbon (1966), Tongue (1967) – the three latter works being acquired by MoMA New York from 1967. These colourful iconic objects by the most famous French designer of his day heralded a new society being shaped by the massive cultural, economic and technological changes of the early 1960s. Paulin’s furniture followed the forms of the human body as it was freeing itself at that time of social constraints. His rigorous research into new materials (elasticated fabrics and polyurethane foam, for example), associated with innovative construction methods placing wellbeing at the heart of the process, allowed all kinds of possibilities, creating a new malleable sense of space. Paulin’s radical artistic stance joined formal modularity with sensuous functionalism. His travels in Scandinavia (1951) and Japan (1963) made a lasting impact on his work and aesthetic approach, which he applied to the interior commission for the private apartments of President Georges Pompidou at the presidential palace, the Elysée, in 1971. The ensemble work was even more daring than the “modern, but classical” pieces commissioned in 1983 by President François Mitterrand. The luminous coffee table “Rosace” is at the center of the dismantled fumoir by Paulin that he fitted in 1971 for the semi-circle shape of the Salon Napoléon III in the Elysée Palace. The structure was conceived to be reminiscent of a gothic cross vault, as well as suggesting the forms of an igloo or a yurt. The shape of the table echoes the ribbed nave of the dining room, still on site as a grotto, from which springs a rain of 9000 luminescent cristal stalactites.

The body must be at one with its surroundings: the floor, walls and ceiling were imagined as a harmonious whole, on the edge of art, design and architecture. A low centre of gravity echoes the interiors of Japanese houses and nomads’ tents, an example being the geometrical “Diwan” rug (1992) that falls along the wall onto the floor of the Gallery, lying between a tapestry and a rug.

The modular undulations of the “Déclive” (1966), with its succession of curving foam seating bars interlinking on two Pierre Paulin “La Déclive”, 1966. Wood boards covered with foam and red textile, structure in laquered aluminium 120 x 300 x 140 cm / 47 1/4 x 118 1/8 x 55 1/8 inches Pierre Paulin with videos by Iván Argote, Erró, Jesper Just and Xavier Veilhan Galerie Perrotin, New York June 22 – August 19, 2016 articulated aluminium spines, gives it a weightless quality. To date, there exists only two prototypes of this piece, one of which entered the collection of the Musée national d’Art Moderne/Centre Pompidou in 2003. Atypical, in that it is half sculpture and half furniture, the “Decline’’s voluptuous silhouette contrasts with its precise craftsmanship and captures its creator’s quest: “I am what you could call a para-artist. Someone somewhere between the artistic and the technical spheres. And this only works if I excel in both.” Indeed, all the Pierre Paulin’s creations have these sculptural qualities that enhance the function and design.

Commissioned by the Herman Miller company, the “Tapis-Siège” was designed by Pierre Paulin in 1970 for a housing project, formulated as a manifesto for a new art of living. Herman Miller produced pieces by Charles and Ray Eames, whose work Paulin had long admired. The project revolved around the idea of combining different elements, assembling or disconnecting them as the mood took, and thus becoming architects of their own unique spaces. The maquette for this project, which was never eventually produced, also entered the Musée national d’Art Moderne/Centre Pompidou collection in 2003. The prototypes have been displayed for the first time by Louis Vuitton and Paulin, Paulin, Paulin, during Design Miami 2014 at Miami Design District.

In 1985, Paulin received a commission from the French Ministry of Culture/Mobilier national, for the monumental colonnaded hall in the Palais d’Iéna built by Auguste Perret in 1939, and now home of the Conseil Économique et Social. His “Jardin à la française” rugs divided this immense hall into seven spaces for intimate conversation, each comprising low tables in sycamore wood (previously existing only as a drawing), flecked maple and aluminium with chairs in sycamore, aluminium and foam. The geometrical lines echo the coffered ceilings, fitting discreetly into the imposing, majestic architecture. The patterns on the rugs partially repeat a project created for a stone garden in the Palais Royal, in a competition won by Daniel Buren’s columns in 1986.

The “Dos-à-dos” (1968), evocation of the classical double chair “Boudeuse” that was popular in the 19th century, and the “Face-à-face” (1968), reinterpretation of this confident chair, resulted from studies for his first public chairs commission with Mobilier National/Ministry of Culture. They are designed to create intimacy for two people who wish to talk head to head, back to back, or very closely with legs interwined, face to face. They can even be combined in multiple ‘conversations’.

Finally, the table “Cathedral” in aluminium and glass, which Paulin considered his masterpiece, combined the precision of engineering with the highly wrought curves of Gothic architecture. The “Cathedral” has been developed by the Atelier de Recherche et Création du Mobilier National and edited in 1981 by Artcurial.

Seeming to evolve in a time slowed down or suspended, pieces by Pierre Paulin in New York are presented in dialogue with videos by artists from the Gallery: Iván Argote, ERRÓ, Jesper Just, Xavier Veilhan.

Ivan Argote scrutinizes our contemporary society in a subtle way through different devices, lens & angles using myths, symbols, history of art, politics, sociology, communication strategies, and a brilliant sense of humour. In his short films, Ivan Argote creates interventions in the city, revealing a poetic vision of daily life that would otherwise have escaped us at first glance, as we see in “Summer time”, 2011, and “Untitled, New York”, 2011.

In his film “Grimaces” (1964-1967), ERRÓ, who belongs to the same generation as Paulin and has been one of the prominent figure of Pop Art for more than 50 years, has captured up close 167 artists’ grimaces while their names are quoted as a sound poem written by the lettrist artist François Dufrêne. The artists featured are: Arman, Pierre Alechinsky, Jim Dine, Marcel Duchamp, François Dufrêne, Raymond Hains, Richard Hamilton, Roy Lichtenstein, Claes Oldenburg, Michelangelo Pistoletto, Man Ray, James Rosenquist, Carolee Schneemann, Frank Stella, Soto, Andy Warhol, amongst others. The film evokes in a facetious way the silent Screen Tests (1964-1966) by Warhol shot during the same time period.

In Jesper Just’s enigmatic films that are devoid of dialogue, a mastery of cinematic strategies are placed in the service of a narrative based on a panoply of human emotions, amplified further by brilliant use of music. The mystery disrupts the narrative, creating a tension that allows the poetry of the space and architecture emerge. In “in the shadow/ of a spectacle/ is the view of the crowd” (2015), as the camera looks out from 225 Liberty Street, NY, it focuses on the iconic One World Trade building standing directly across. It is dusk and the sky surrounding the building is still lit with a daytime glow. Over the period of an hour, the camera approaches closer in an extremely slow zoom while night continues to fall. A bass is heard, playing from an unseen source, serving as a soundtrack. As the sky darkens, the building becomes illuminated and transparent, revealing the activity inside to the viewer. Gradually, the individuals within the office spaces emerge, becoming clearer as the sky darkens and the camera draws nearer. We see a musician and a bass player, and the music is in fact not a soundtrack, but emanating directly from a performance in the building.

Xavier Veilhan, who has been selected for the French Pavilion at the 57th Venice Biennale in 2017, considers the many possibilities of representation and the art of the exhibition as part of his leitmotif. Through complex devices, a playfulness emerges as a fundamental element, evoking a reality crowded with symbols, metaphors and other semantic ambiguities. In parallel, the film “Vent moderne” (2015) plays with perspectives, scale and the links between set and architecture; while “Matching Numbers” (2015), created for the 3e Scène of the Opéra national de Paris, freely unveils the two Paris opera houses as a mysterious machine, a complex apparatus that evokes more engineering and technique than fiction and show, becoming a place of exploration, rendered almost dreamlike by the absence of public and spectacle.

A retrospective of Pierre Paulin is organized at Centre Pompidou in Paris until August 22, 2016 (curator Cloé Pitiot).
www.perrotin.com