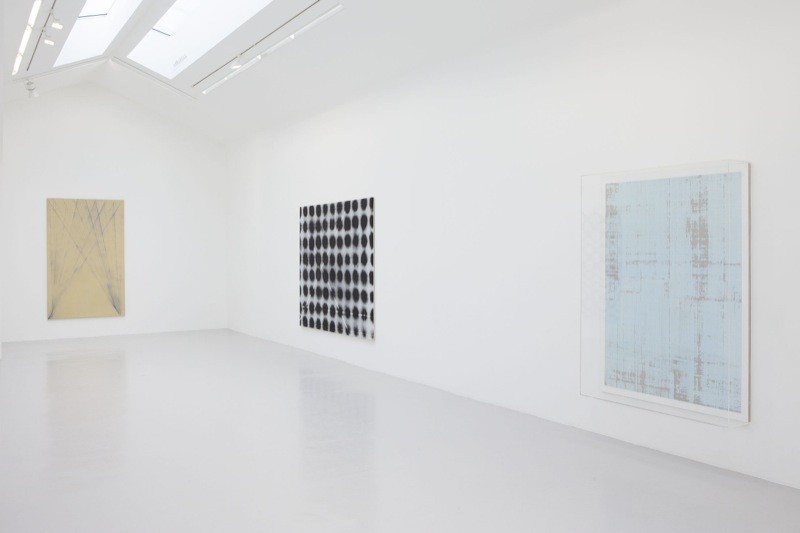 The title “Post-Op”, which stands for “postoperative” and “post-optical”, seeks to define a little known pictorial movement. Since its beginnings in the 1950s to its more recent ramifications, this movement is the result of a constant dialogue between two antagonistic principles of abstraction: the systematic, precise geometry of optical art as a generator of visual phenomena, and the expressionist or informal highlighting of the operations, traces, wanderings and other painterly accidents that are inherent to a work’s execution. Numerous paintings, wall drawings and other works on paper by over twenty artists, who have been invited by curator Matthieu Poirier at the gallery, have been borrowed from collections or produced for the occasion.

These creations stem from very different periods, protocols and imaginations, but they are characterised by a number of aspects: graphic approximations in the work of Michael Scott, Nicolas Roggy or Florian and Michaël Quistrebert, a particular chromatic range - be it restricted in Richard Wright’s work or fluorescent in pieces by Manfred Kuttner and Philip Taaffe - and by Piero Dorazio’s rhythmical weave of the visual plane. The paintings shown all offer a critical response to the absolute, neutral geometry of Op Art: the frame is shaped or hollowed in works by Blair Thurman, Tillman Kaiser, John Tremblay and Julian Hoeber, and even dispensed with by Sol LeWitt, whose wall-drawing features several errors and imprecisions, while Louise Bourgeois’ canvases, cut up and stitched back together, create a spidery tangle of targets. Dieter Roth creates an interpenetration of grids and sfumato, while Claudia Comte makes silk-screen prints with a chainsaw and Dan Walsh weaves together the passages of the brush on the canvas. In every scenario, accident and irregularity play a very precise role: by rooting the gaze in the particularities of detail, they consciously disturb the vibratory and hypnotic continuum of the whole. Likewise, the frequently sensual imperfection of the graphic act reveals the irreversibly material nature of this “optical” art, which persists as an object. This is seen in the work of Richard Wright whose erased grids are borderline perceptible, Heinz Mack, who spreads or rubs graphic material, Kazuko Miyamoto, who atomises lines and spots to make them radiate in space, Emilie Ding, who blacks out huge mandalas inherited from Bridget Riley with a graphite pencil tip, or Éric Baudart and his graph paper, whose epidermis is scoured with a scalpel, line after line.
In his exhibition “Post-Painterly Abstraction” at the Los Angeles County Museum of Art in 1964, Clement Greenberg considered the optical art of Frank Stella or Kenneth Noland as a reaction to the abstract expressionism of Jackson Pollock or Mark Rothko. The works in “Post-Op” show that an opposite perspective exists; they question the immaterial primacy and the mechanical precision of Op Art by reverting to the body - here in the surgical or visceral sense of the term.
Beyond its diversity, the body of work brought together for “Post-Op” proves that a border zone exists between two apparently contradictory aesthetics, and also that art history is the product of exchanges more than territories and that moreover, optical art, which was thought as a death sentence for painting when it hit the scene, paradoxically seems to have served as a contribution.

Matthieu Poirier is a Doctor of Art History. A former teacher at Paris-Sorbonne University and a resident at the Centre Allemand d’Histoire de l’Art, he recently co-curated “Dynamo” at the Galeries Nationales du Grand Palais and co-organised the Julio Le Parc’s retrospective at Palais de Tokyo, Paris.
www.galerieperrotin.com