Learning The Magic Of Painting 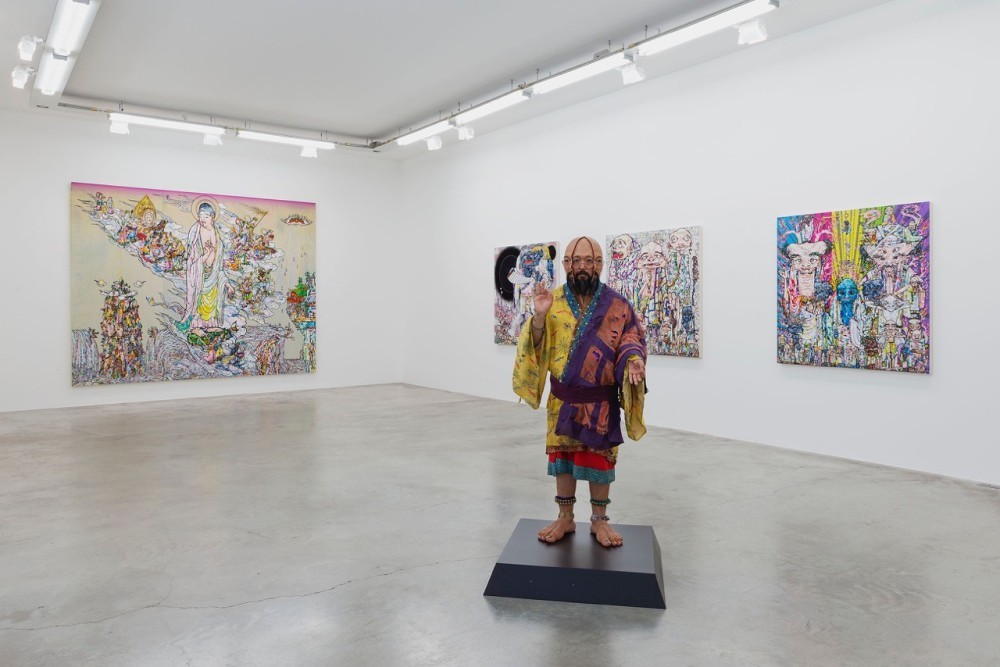 Ever since I started studying painting at nineteen to this day, at fifty-four, I have been, and still am in the middle of, learning the magic of painting.
A painting’s process of generation starts with an intent.
A painting approaches becoming a painting in the moment it transcends the intent.
A painting is no longer a painting once it becomes a painting. Its essence is truly magical and ungraspable.
Yet when we physically stand in front of the painting among paintings, we can comprehend that it is a true painting.
A genius may easily achieve such a state.
I have humbly and respectfully examined the magical recipes of painting a handful of geniuses have left behind. They are truly brilliant, these magical recipes. But the various factors surrounding such geniuses’ lives, from their places of origin to the eras in which they lived and their social standings are so extremely different from my own that I am unable to immediately apply such recipes myself.
I would try incorporating some of the magical recipes into my brain, but they are not compatible; in fact, at times they would trigger rejections.
The spark of idea that would bring me to the magic never arrives. And so, day after day, I simply and diligently keep up with my learning and paint the product of that learning.
Yet when I look back, I realize that there remains a trace of my own magical spells even in my pictorial memos from twenty some years ago, those left in the process of such wretchedly laborious efforts, albeit somewhat difficult to discern—self-pitying and extremely deformed as they are—unlike those of the past geniuses. If I now reassemble these individual memos, they might constitute a section of a magic circle; a little bit of magic might even emerge.
Nay, perhaps this will merely turn out to be a tragedy triggered by my misconception.
Still, it will give me hope to live on.
By continuing to learn and paint the result day after day so as to leave even a faintest of trace, my hope to live my possibly tragic life, the recipe for my magic circle for painting, accumulates.
Until the moment my body expires, in the near future, I wish to continue perfecting my magic circle that may summon the magic, to understand the essence of the magic of painting, and to try and complete the recipe for generating the magic of painting.
The works for this show, then, are also the records of my learning along the way. I have been working my way in earnest, but I am still far from arriving at the essence of my magic. But I believe each of the works contains some fragments of the essence—even if they turn out to be tragedies! I choose to believe so anyway.
Will I really manage to create the magic circle that can summon magic, or is everything a misconception and I am merely living a tragic life?
Whichever it may turn out to be, today, as always, I am learning the magic of painting.
Takashi Murakami

Galerie Perrotin, Paris is delighted to present, from 10 September to 23 December, Takashi Murakami’s 12th solo exhibition with the Gallery over more than 20 years. Spanning across the 3 spaces in Paris at 76 rue de Turenne & 10 impasse Saint-Claude, more than 40 recent and heretofore never seen artworks have been gathered for this special occasion. Some of the works were displayed until recently at Murakami’s major solo retrospective “The 500 Arhats,” which was on view at Mori Art Museum in Tokyo from 2015 to early 2016. These include a monumental multi-panel painting entitled “A Picture of Lives Wriggling in the Forest at the Deep End of the Universe” (2015), conceived as an anthology of iconic themes of Murakami’s cosmology, from 727, Gerotan/Mr. Dob, Dragon, and Panda series to mythological animals, lion, elephant, tiger, goat, etc.

A second group of works will focus on the theme of the arhats. Originally explored by Murakami in a 100-meter long painting “The 500 Arhats” produced for his solo retrospective in Qatar in 2012, the arhat paintings represent the 500 wise followers of Buddha who attained enlightenment by overcoming their greed, hatred, and delusions, destroying their karmic residue from previous lives. The faith in the arhats was conveyed to Japan during the Heian period (8th-12th century) and flourished throughout the country during the Edo period (17th-19th century) in the form of paintings and sculptures. Kanō Kazunobu’s “Five Hundred Arhats” (housed at Zōjō-ji Temple in Shiba, Tokyo), a 100-scroll series of paintings made directly following the fearful 1855 Edo Ansei earthquake, has greatly inspired Murakami, who in turn painted his “The 500 Arhats” in response to the 2011 East Japan Earthquake and Tsunami, an event which profoundly changed the overall direction of his work. The representations of arhats presented in the Paris show are both continuations and excerpts of this masterpiece. In an ironic touch, Murakami has even portrayed himself as a robot sculpture, “Arhat”.

Galerie Perrotin will also feature a selection of paintings from Murakami’s “Ensō” series. The subject of these new paintings is one of the most famous motifs in Japanese Zen painting, the Ensō (literally, ‘circle’) that symbolizes emptiness, unity, and infinity in Zen Buddhism, and is also a form of meditation. Since 2007, Murakami has been painting the great figures of Zen Buddhism: Daruma the Great, the founder of Zen, and the severed hand of the monk Eka (Huike), a sacrifice to his master Daruma (Bodhidharma) whom he later succeeded. The Ensō paintings represent another epiphany for the artist, resulting from quiet and ongoing spiritual practice. The Ensō is the prerequisite to every act of creation, a moment when the mind is free to let the body create. Traditionally traced with a brush in one fluid and highly mastered stroke, the circle does not allow for a change of heart. Murakami executes the Ensō in his unique style, using spray paint over his signature accumulations of flowers and skulls, on raw canvas or partially painted. The Ensō is a true homage to Japanese tradition, a return to a more unfettered minimalist practice; the result of a complex artistic and spiritual path.

Amidst all of these works, viewers will notice several of the motifs and characters which have defined Murakami’s art over the past twenty years. One particular focus is the motif of the skull, an image which has always been featured in Murakami’s iconography. In Murakami’s universe, the skull symbolizes the impermanence of our lives, as in Buddhism, or the western tradition of vanitas. They can be an element of the composition of the paintings (for example a bridge made of skulls on which lions sit, or skull rocks on which different animals stand) or sometimes animate the background of the painting as a whole, for example in the Monochrome or Ensō series. They can even be the central motif to contemplate.

Some of Murakami’s new paintings refer to the 17th-century Japanese artist Ogata Kōrin, whose white chrysanthemum motifs left a deep impression on Murakami (in 2009 a first series was presented at the Gallery). The flowers stand out on gold or platinum-leaf backgrounds in the purest Japanese tradition, here, on outlined skulls. Their precious materials create a delicate contrast with the fragility of the ethereal
plants, once again evoking memento mori.

The abstract patterns in Murakami’s paintings, sometimes comprising entire works, combine hypnotic visions of outer space phenomena with the artist’s reminiscences of abstract expressionism, as well as citing artists such as Cy Twombly, Roy Lichtenstein, and Sigmar Polke (whose style is evoked with the use of Ben-Day dots).

Lastly, viewers will notice frequent appearances by Murakami’s famous alter ego, Mr. Dob, who appears in diverse contexts, morphing its own form, and whose ambivalent personality shifts from friendly to fierce, seemingly at will.

Takashi Murakami, who has a PhD in Nihonga painting, combines the most cutting-edge techniques with the precision and virtuosity of traditional Japanese art. Inspired by manga and kawaii culture, his irresistible world is peopled by monstrous and charming characters alike, as facetious descendants of past myths. His theory of the Superflat aesthetic, which he introduced in 2001 with the trilogy exhibition he curated (the third part was entitled “Little Boy,” which refers to the codename for the atomic bomb dropped on Hiroshima in 1945), attempts to blur the boundaries between popular art and high art; it has explored the evolution of Japan’s understanding of its post-Hiroshima condition and the interrelationships between vanguard art, manga, anime and their forerunner, Ukiyo-e woodblock prints. The absence of perspective, the two dimensionality of ancient Japanese art, filters in to every medium.

Since his first monographic exhibition outside Japan in 1995 at Galerie Perrotin, Murakami has become recognized as one of the most prominent contemporary artists of his time, and his work has been featured in numerous solo exhibitions at museums and art institutions throughout the world, including “The Meaning of the Nonsense of the Meaning” (title of his doctoral thesis) in New York at the Center for Curatorial Studies Museum, Bard College in 1999; MoMA PS1 in Long Island City, NY (2000); Grand Central Station in 2001; the Fondation Cartier and the Serpentine Gallery in 2002; the Rockefeller Center in 2003, the traveling retrospective “©MURAKAMI,” shown first at the Museum of Contemporary Art in Los Angeles in 2007, then the Brooklyn Museum in New York, the Museum für Moderne Kunst (MMK) in Frankfurt, and the Guggenheim Museum in Bilbao. In 2010, France’s renowned Château de Versailles organized an important solo exhibition of his works inside the palace and its gardens. In 2012, a retrospective entitled “Murakami-Ego” was organized by QMA at Al Riwaq Exhibition Hall, Doha, Qatar and included the 100m masterpiece painting “The 500 Arhats”. Murakami’s own personal art collection was unveiled for the first time at the Yokohama Museum of Art in early 2016, in a show entitled “Takashi Murakami’s Superflat Collection —From Shōhaku and Rosanjin to Anselm Kiefer—”
www.galerieperrotin.com